On the weekend of the 18th May I caught the train down to to pick up the motorhome, now Blackdown have completed the repair and refurbishment works; more on that in a line or two, first the travel news.

I left home to catch my usual commute train to Fenchurch Street Station and then pootled my way across town to to catch the 09.30 train to . In terms of travel things couldn’t have been easier, in part because I like to give myself wide margins of time for travel on train and tube (in case of hiccups). I tend to build in enough time to walk between connections; this is a legacy of being a walking engineer in some ten years ago. People never believe when I say most places in the city are a walk away, until they walk with me. 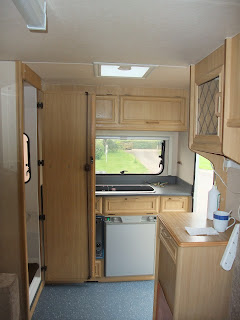 In any event my caution paid the dividend I’d hope for, to whit: an easy coffee and Croissant from a booth on Waterloo’s insane rush hour concourse and an easy stroll to the front three cars of the train that are the only part that goes as far as Exeter (the rest breaks of at Andover, and unless I miss heard splits off towards Bath).

The only incident to report relates to my clothes. There I was fumbling in my wallet to separate my train tickets from the receipts so I could pass through the barriers. During said fumble I dropped my wallet. I crouched down to pick it up as I can’t bend because my spine is fused pretty much from neck to waist, and heard rrrrriiiiiip… it was the crotch of my jeans. It was one of those little epiphany moments. From almost the time I’d gotten on the train at Tilbury I’d been getting odd looks. The reason being that the jeans I was wearing already had a minor rip by the seam at the base of the zip. I’d forgotten about the rip, and clearly I’d forgotten to do the repair, but the jeans had been cleaned and pressed and put back in my wardrobe. I’d then put them on totally oblivious to the fact that my nuts were already half hanging out… hence the odd looks earlier; and having now crouched to pick up my wallet I might as well have been walking around in just my boxers. 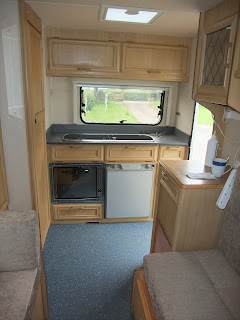 I did try to find a men’s clothes shop on Waterloos concourse, but unfortunately with the £10million pound refit that’s in progress, I all I could find was a Monsoon, an Accessorize or WHSmith which somewhat limited my choices…. In the end I decided that finding a seat with a table on the train would do. I then spent the next couple of hours sitting opposite Dr Gus Casely-Hayford and a team of women he was travelling with, followed shortly after his party left the train by a group of twenty chaps going well and truly “on the piss” in Torquay for the weekend.

I was happy to get off the train at Honiton, having been co-opted temporarily into the Piss up group, who seemed to be at pains to get me drinking beer, (always tempting but not when you have a long drive ahead).

And so we come to the Motorhome refurb; Paul has done a competent job. The leak repair and new ceiling are fantastic, and the colour match is as near as dammit perfect. The new wet-room is a clean white wipe-down affair, and the new cassette toilet looks great in the un-fussy easy clean wet-room. All that needs to be done is the fit and fix of a showerhead and taps gas and 12volt systems. The new roof lights are clean, aerodynamic and don’t have fly screens that rattle when the engine idles. The kitchen unit is resplendent with it’s new work top, hob/sink combination and spanking new cooker and Fridge. Paul’s wife has done a fabulous job with our re-designed cushions and the new extra large all over bed I designed is simply brilliant. The floor is now a hardwearing industrial lino in a pale blue terrazzo affect, and to finish Paul has fitted new blinds that are uncomplicated in operation and design (being blackout but plain white). All things being equal we are very happy. 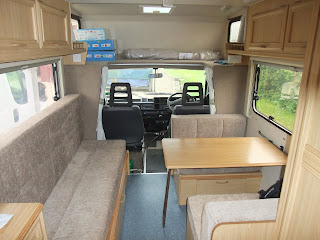 Having spent several hours with Paul going over the fixture and fits, limitations of what he could do to seal the habitation unit, and a modification to the water tank that allows unparalleled ease of cleaning, it was time to hit the road for Somerset and the big clean. It was at this point that I realised I’d left the Satnav Power lead in the cars door pocket a hundred miles and more to the east and would now have to navigate to Somerset using a map drawn on the back of an envelope and the force. I had 54 miles to navigate, and was suddenly very aware of how reliant I’d become on the satnav, and equally aware that I need to put the old fashioned road atlas back in the cab and leave it there. I think I managed fairly well with only two definite wrong turns that required strategic three point turns.

I arrived at our friends house in Rooks Bridge Somerset around 4.30pm, and decamped. Amanda joined us later by train to Highbridge, and then after a quick whiz round Asda for supplies we had a splendid dinner and ales and a relatively early night.

Saturday morning I had a bit of a head on me from the ale, but nevertheless got the bucket and sponges and went out to clean the moho from top to bottom. There’s a little over 150 square feet of moho to clean, including roof sides and cab. It had sat mostly on a drive in for two and a half months… it was filthy with rain residues and ale. To make things even harder on ourselves we also wanted the old Elddis Decals removed from the bodywork as they were faded and tatty after twenty years of pounding by both sun and rain. So armed with little more than finger nails and a small hair drier the stickers took the best part of three hours to remove, and my nail beds still hurt today.  It then took us four hours to wash the entire body shell and cab after that… but that’s not the punishing part. After washing it from stem to stern, it had to be T-Cut all over to get rid of the dark marks where rain drains from the roof down the sides, and to get the colour looking even where the stickers were removed. We finished at around 7.30pm, had another splendid dinner and some more beer, and I found myself making my excuses at 09.30pm and going to bed with a hot water bottle for my lumbar spine and a fervent desire for the magic pixies to come in the night and wash it again and wax it… and there in lies the problem with pixies, they are lazy feckless little bastards only interested in flitting round woodlands and looking good. So at 9am on Sunday morning we went back out with buckets and sponges and washed the moho from top to bottom again, this time to remove T-Cut residues in preparation for the waxing. Thankfully this entire process only took six hours, it must be said that the pain was worth it. I doubt the moho has shone so bright since it rolled off the production line in 1991.

The question now is; Will we actually get to use it this year? And the answer is likely to be “no”. We still have a huge amount of work to do at home to get it ready for sale, damp fix, and decoration being the least of it. I booked off the Jubilee week in hope that we would be going to Southwold in to try everything out, but with damp works and decorating at home, I can see that nine days being eaten in one great big chunk. One must be philosophical; we intend to live in it full time from early next year for at least two years, so missing out on high summer for this year is on balance a worth it.