So here we are a best part of a month since the last post. So what’s been happening?

Well our 21 year old motorhomes leak proved too difficult to fix roadside, primarily because in removing the internal structures to get to the rot, would have compromised Structural integrity. I could have done the work in two halves, however this would have brought with it, its own set of unique problems. And again these problems revolved around stability of the habitations external skin and potential for mis-alignment. I couldn’t find a unit for rent to take the motorhome off roadside to do the work myself. This would have sorted out all the issues. I could have taken a fortnight off to kill the core repair job, and then spent the following weekends and evenings doing the internal re-fit, but finding a unit without a long minimum lease was impossible. Which given the state of the economy, the number of sizable empty units nearby and the fact that I was a cash payer willing to pay whatever insurance was required seems daft. I could write an entire post about the stupidity of small industrial estate owner’s agents and their odd belief, that what I was actually looking for was a retail unit in the centre of town, a 120000ft warehouse with offices and a price tag of £29000 per annum etc. However why waste time? 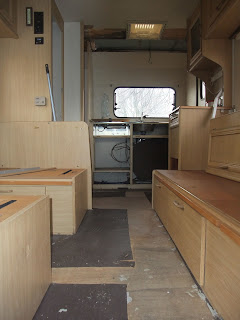 So having spent several weeks chasing false leads and getting nowhere I eventually decided that spending the money we were thinking of spending on a unit and doing the repairs ourselves would be better spent on an expert fitter or re-fitter and getting the job done properly.

In between times I stripped out everything I could to create a bare shell, in the hope that something would turn up eventually but in the end, I went back to No1Gear http://www.no1gear.com and asked Mike Chubb (No1gear’s owner) if he could recommend someone. He passed our details and to Black down conversions,
http://www.blackdownconversions.co.uk and after the exchange of photos to assess the damage, and the viability of repair and refurbishment; I drove the motor home to Devon on Thursday 22nd of March and entrusted it’s care to Paul Studley and his wife, who can sort out not only the repair but also the re-fit of the kitchen, wet room, and all the upholstery.

There isn’t much more to say right now. Back ground preparations are taking place: Things like insurances for living full time in a motorhome, routes round the country, finances for stopovers etc. And as things that matter get more body so posts will hopefully be more frequent and full.
Posted by ILTYT_Adventure at 07:01