Turning ones toes up, kicking the bucket, shucking off one’s mortal coil and joining the choir invisible, to mix some metaphors. My dad did this at 11.15am on Tuesday the 10th of November 2015 after what can be described as a short illness, preceded by a number of other illnesses, associated with smoking, being a coeliac, burning the proverbial candle at both ends for too long, double knee transplants, deep bone infection, a blood clot, and an alluded to cyst on the liver all in in parallel with ignoring doctors’ advice, ignoring my mother’s advice, ignoring the advice passed via my mother from various people she told about my dad’s various conditions in the hope that the stubborn old bugger may find a gem of wisdom, which would create an epiphanous state in the aforementioned stubborn old bugger; inducing a life prolonging adherence to sagely advice offered by numerous medical professionals and concerned parties familial and otherwise. Did it bollocks. As my elder brother said, he lived by his own rules, not that these contradicted any laws or statutes (sound medical advice withstanding) or brought harm to any person or animals in the making of his life … except some ants he once incinerated for his children’s amusement using Humbrol Thinners as an accelerant and a match.

Death is very final, very definite, the end. No more questions, no more worries about things you said, didn’t say, did or didn’t do.
It is a most levelling experience for those of us that go forward from that point … relay runners carrying a baton, or maybe more poetic; torch bearers carrying the flame forth through the allotted time we have, before we also, end. From the bio-electrical spark of sperm and egg to the final discharge of life's battery.

You suddenly deduct your age from the age of your nearest and dearest and run a mean time on how much time you may have left of life, and realise time is short. Don’t waste it.

Grief is the hangover experienced by the departed's nearest and dearest in the immediate and long term aftermath of the deceased’s deceasing. And I guess this is more about grief than it is about Pa (as the deceased shall now be referred to from hence forth) passing ... there is very little he can do about it. I've been around some deaths leading up to this one (sort of warm up deaths in readiness for a main sequence death). As time goes by, as your elders get even elder, you turn your thoughts to their demise and hope that you can live up to their expectations of you in the immediate aftermath; things like be sad that's ok, but don't be an utter bellend and collapse into yourself like you died too. With respect; that is probably an outcome for many, and in the wake (see what I did there?) of Pa's passing I can see how crushing a parent, a child’s, a life partners death can be, but to let that experience destroy you dishonours those that went before. Life we realise above (and hopefully in time) is shorter than you think … `It’s Later Than You Think’.

For what can only be described as `most of the time' I'm OK, even though it was only fourteen days ago that Pa breathed his last; frail looking, yellow white, waxen and riven with blue veins as the hospital cooled and piloted his systems manually for the last forty-eight hours of his mortality. Not the greatest last mental image, but a certain knowledge that laying there, he was already beyond pain lends a certain cold comfort.

By the time Amanda and I arrived to see him on the evening of the 9th of November, the only thing keeping a little warmth in his shoulders and some bio-electrical activity in his nervous system was the constant busying of the little Indian nurse making adjustments to fourteen or fifteen machines that go ping, and the associated pipes and cannulas. A part of me imagined the old man `Pa' holding one hand in the corporeal while looking to the light of the quantum realm just waiting for all the nearest and dearest to acknowledge that the carriage was worn out, and that he should go explore the space between the spaces, unencumbered by the vessel he had wilfully wrecked in the pursuit of not letting `the' bastards grind him down.

I, We were the last to arrive, I hadn’t visited in the two days before when Pa had been initially admitted with some insistent internal pain, he usually bounced back. But then he had collapsed in hospital, and had lain unbreathing for an unspecified amount of time, ticker ticking but clearly somewhat oxygen starved, that was the prelude to the end. When my sister called me to say matters had become more urgent than usual, a part of my deepest id suggested that not making the journey would leave me bereft of a last chance, to say something to the old man (however unheard that last something may have been) a last rite a silent goodbye, a knowledge you'd rather be without, but have to have the stones to see it for what it is and know there is nothing anyone can do about it except make it easy for the departing. Amanda and I left Pa’s bedside around 9pm on the 9th of November, and popped in to see my mother, then drove back to Somerset. Fourteen or so hours later I was very glad we’d made the trip.

It's these thoughts that reduce a man to tears. It's looking at Brent Knoll and thinking I would have carried that obstinate bastid up it if only he’d survived until spring and the much talked about visit to us in Somerset. Pa never came here, 2014 came and went in a flash of sorts, and then this year he’d just waged war against ill health starting with getting an infection above one of his robo-knees (in his thigh bone). This saw him fitted with a spacer where a knee was previously; basically a bar full of medication to keep the leg the right length until a new knee could be installed, or the leg was amputated (those were the options at one point). So no more walking at all by the man that made all his children quick steppers. Subsequently he had blood clot above the knee, plus a surgery to put a new knee in down the line, and suddenly my morbid expectation that he would never see our home or surroundings here in Somerset becomes less negativity, and more like a pragmatism borne of some internal algorithmic probability engine. Being right can be a bugger, but just seven days before Pa’s passing we spoke about when he and Ma would come down, see the garden and get the grand tour of Somerset. He didn’t give up, death cold cocked him in dark ally.

You imagine that you’ll be an utter wreck or a stoic brick, Vulcan like in your stiff upper lip’edness. But the truth is you are neither. You are you. You are you, right up until a sight on a misty morning pink tinged hills, diamond set grass and reeds, a blackbirds shrieked flight from a hedge, or a tune that’s always tugged your heart strings, tugs your heartstrings. And then you are neither wreck nor stoic, you are just untethered and lost, floundering for what you feel should be dignified and respectful missing of ones kin, without the undignified eye watery nonsense that changes nothing. And yet it comes ... it's a funny business.

Any questions you had, save them in case you get to pose them in the event that quantum consciousness exists, and isn’t some new balm for the atheist soul who still really really doesn’t want the end to be the end if at all possible.

Failing the unlikely event of the consciousness staying as a coherent form after death, all those questions you had will now and forever remain unanswered except anecdotally by the deceased’s survivors. Anything you wanted to say, too late. There will be no more moments. There will be no more picking up the phone rather than picking up your twenty year old copy of the `Readers Digest Encyclopaedia of DIY’. There is an absence, a void an almost quiet part in your own head where once someone’s voice had a corner.
The collected sounds of forty-eight and bit years shared on the same planet, twenty one of which in the same house. Memories of that voice are not the same as that voice being part of your internal background chatter. A reference point, an anchor, a light in the dark when all other lights have failed. Wherever your parents are you have a home, and suddenly you understand that at some point the only home you’ll have in the future is the home you make for yourself, and that at best you’ll willingly serve the same purpose for your own children. It’s the final part of becoming a grown up in your own right. The ethers umbilical’s are cut, you are more your own than ever before, and while in one sense you are finally nearly just your own, you are less also.

You … I, gather strands of memory like wisps of smoke and plait them together, to create some blanket of cold comfort, a sack of received wisdom you need to sort through ensuring that nothing is lost, but the fact is, that you’re looking for more than wisdom, you’re looking for the opportunity to ask those questions you’ll never ask, or say those things you’ll never say, or drag that old mans arse up to the top of Brent Knoll or Crook Peak so he can see the view you’ve come to love, to walk the beach at Kilve and marvel at the North Jurassic coast, or any of the other sights we’ve seen this last year and a half, never mind going through the hundreds of as yet unseen pictures our recent travels. You’ll never share the knowledge that you think you made the right choice moving west, or that he’d be happy going to his rest, knowing you had made the right choice.

And now the twist, the irreverent humour that we the children of Roland Charles Day shared in the wake of his passing. He died on the 10th of November 2015 and started work again the following Monday 16th of November as a professional dead person at Kings College Hospital. He left his mortal remains to science for the furthering of medicine. In one to three years we will share a sombre day of memory as his cremated remains are returned to us and his journey on Earth finally ends as heat vapour and ashes, Fire, Earth, Air and Water, the stuff of the Universe, of stars and planets.

Hasta la vista Pa, I didn’t realise how much learning you’d imparted until you’d left the building. Thanks. 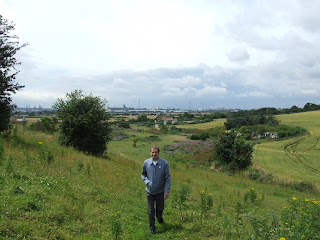