It was our first day out of the New Year, a little tentative because of the weather, and Amanda’s knee problem.

Cold grey, quiet and empty sums ups the ambience of the west on Sunday; mist and fog that deadens noise, a chilling grey damp that reduces vistas to percentages of miles and sounds to eerie disembodied susurrations or ghost ship clangs. To qualify that: St Audries Bay is off the beaten track anyway. Only directly accessible through two holiday campsites that terminate on cliffs that the sea desires be made flat, or from beaches adjacent west three miles to Watchet, to the east you’d struggle to find a way down or up for another three miles unless you knew exactly where you were going (if you didn’t then you could wander for double that).

The danger; were you without wit is deadly on that stretch of lonely coast on a winters day. The tide comes as far as the foot of the cliffs, though in truth despite being the second fastest tide in the world, it has a long walk ashore. However were you foolish and you got caught between steps up those cliffs, you would be lucky to survive. 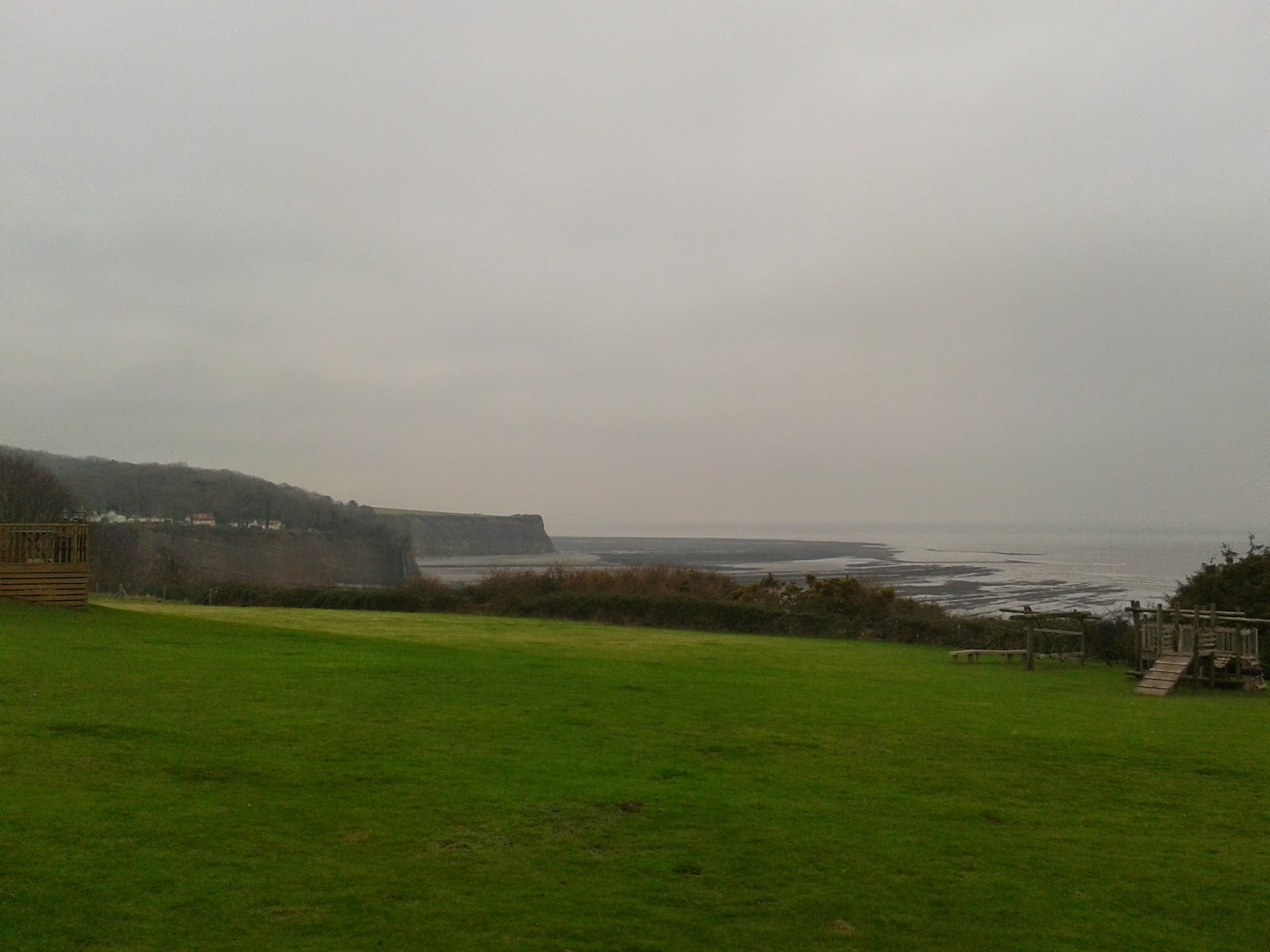 The feeling of emptiness, and other worldliness of St Audries Bay on that winters day is so difficult to describe. Green grass made grey green, grey tea colour sea, an almost featureless grey sky, all blended together by the ice cold damp of mist. I was reminded of the atmosphere of the film `The Road’ a deadly quiet you dare not break for fear of cannibals, or Jurassic park for fear of Velocirapters. But for all that, it was also beautiful and empty, the sea a long way offshore, a vast open beach of mixed geology explained in scientific detail below, courtesy of the UK Fossil Network and Wikipedia. 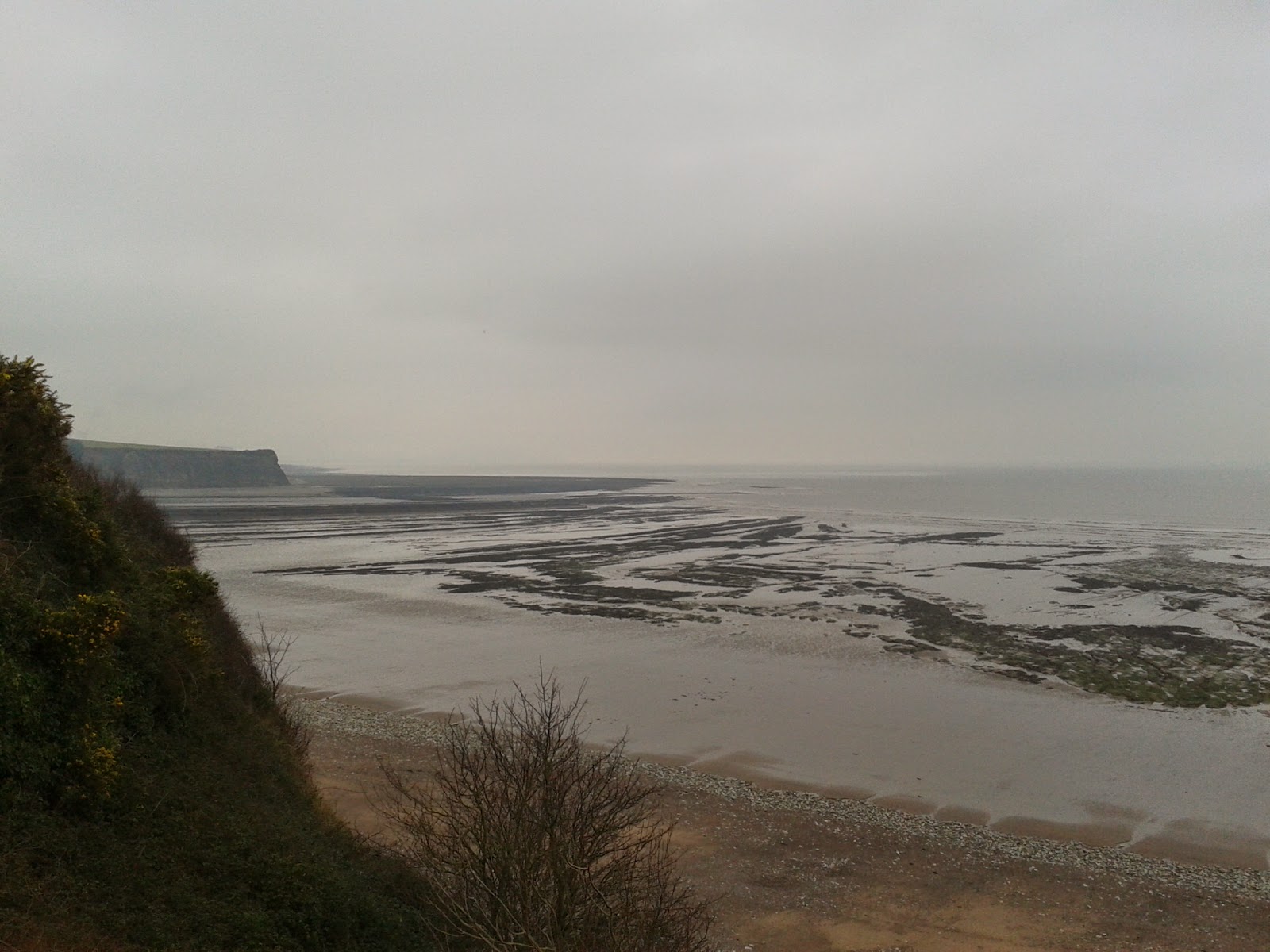 The forshore landscape is alien,  great bands of blue grey rocks all tilted fifteen or so degrees to the flat of the sea, great wide bands of red and grey. That on the vertical plain are simply stripes, but in the near horizontal plain form vast sheets of geological history 200 million and more years old, and looking for all the world like well worn giant cobbled stairs laying fallen. Between these steps of grey stones are runnels of smooth red mud and sand from softer bands of rocks eroding into fine silts washing out into Bridgwater bay and the Bristol Channel. Close in to the cliffs are rounded pebbles from the size of pea to bigger than a mans head. Many of these grey lumps are replete with myriad fossil remains. Between the less mobile rolling rocks and their smaller cousins are bands of beach quality sand. And littered all along the foot of the cliffs are whole trees bleached white, bark sloughing, skeletal roots trying to hold the remains of soil that once held them too close to the edge of the cliff’s top. Enclosed by mist your perspective, your view is shortened and this in turn encapsulates this view and creates an island world in the minds eye. 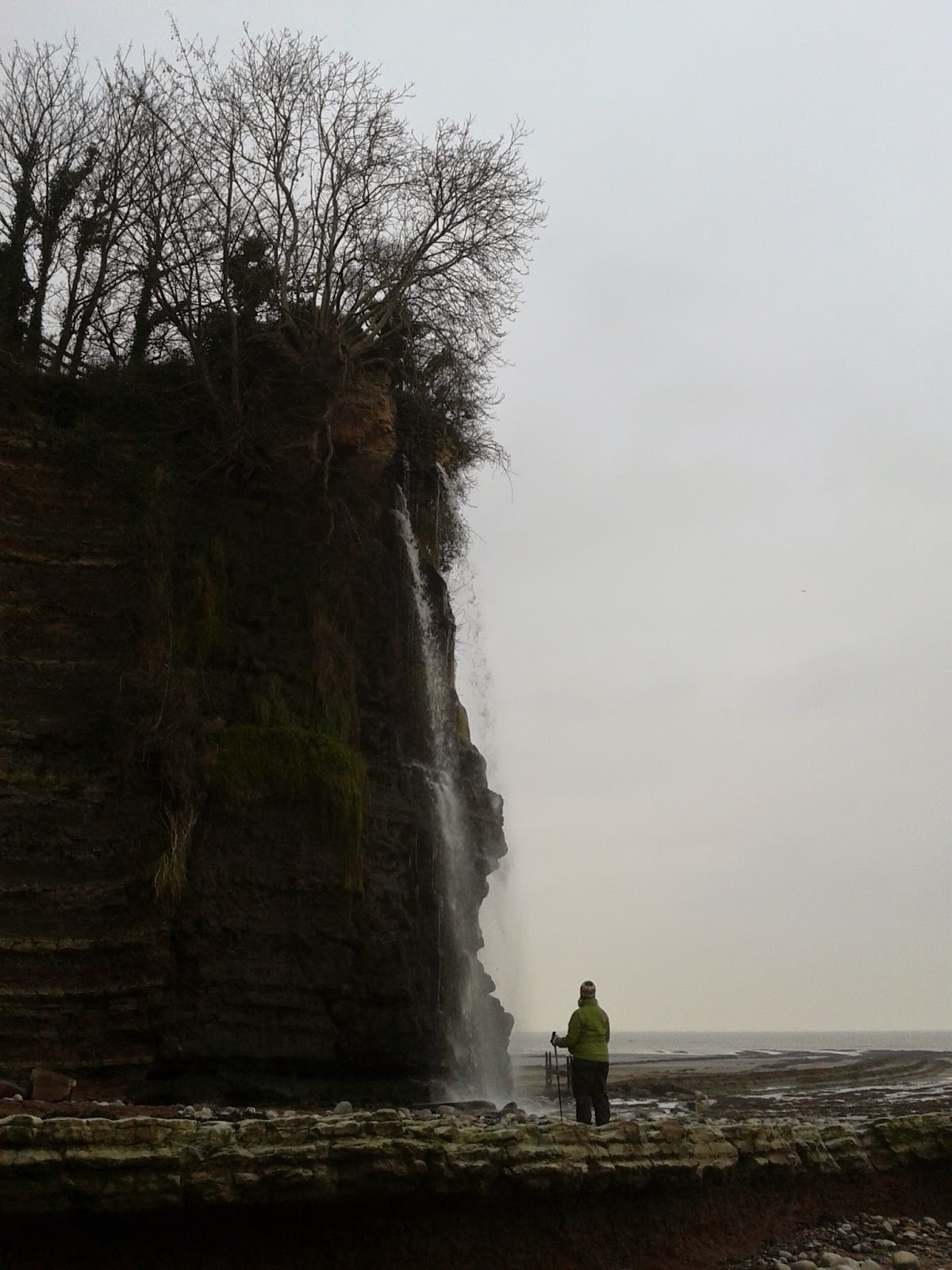 As you descend from the mobile-home park, that feeds the beach its visitors, in the summer you become aware of a waterfall a few hundreds yards distant. I was reminded briefly of falls as we drove through the alps. Ones that have so far to fall the water turns to spray before it ever hits the ground as a stream. However scale and volume of fluid play as big a part in that equation as plain old height. At about thirty feet the fall isn’t high and the volume of water is not huge, however on the day we visited the fall was swollen by days of rain and so we were treated to spray and stream, another layer of sound and sight to add to the entirely alien world we’d entered 29 miles from our front door. 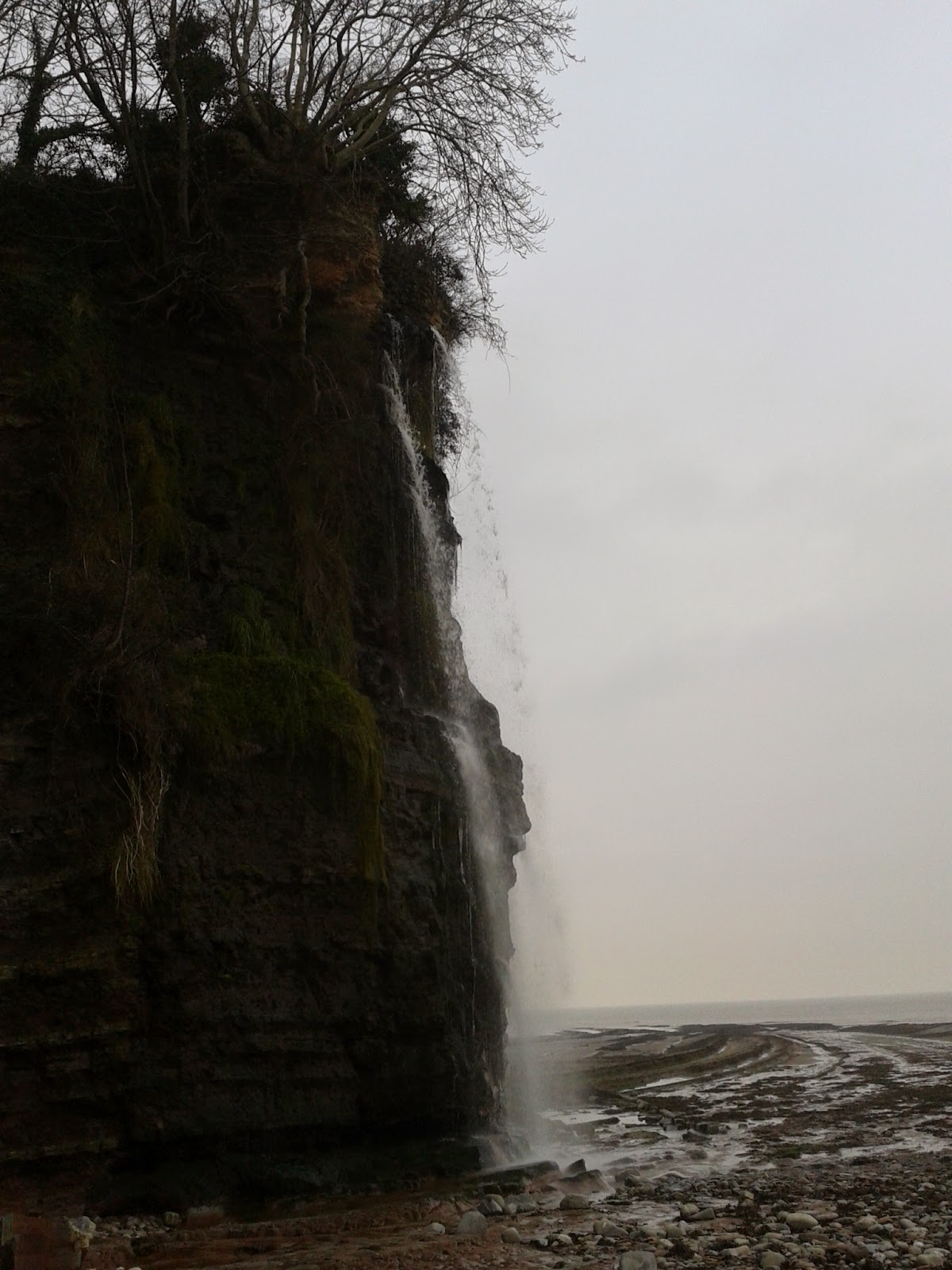 Please read the exerts below, and or visit the sites. And if you’re down this way visit St Audries Bay, or Watchet and walk east a way, you won’t be disappointed. 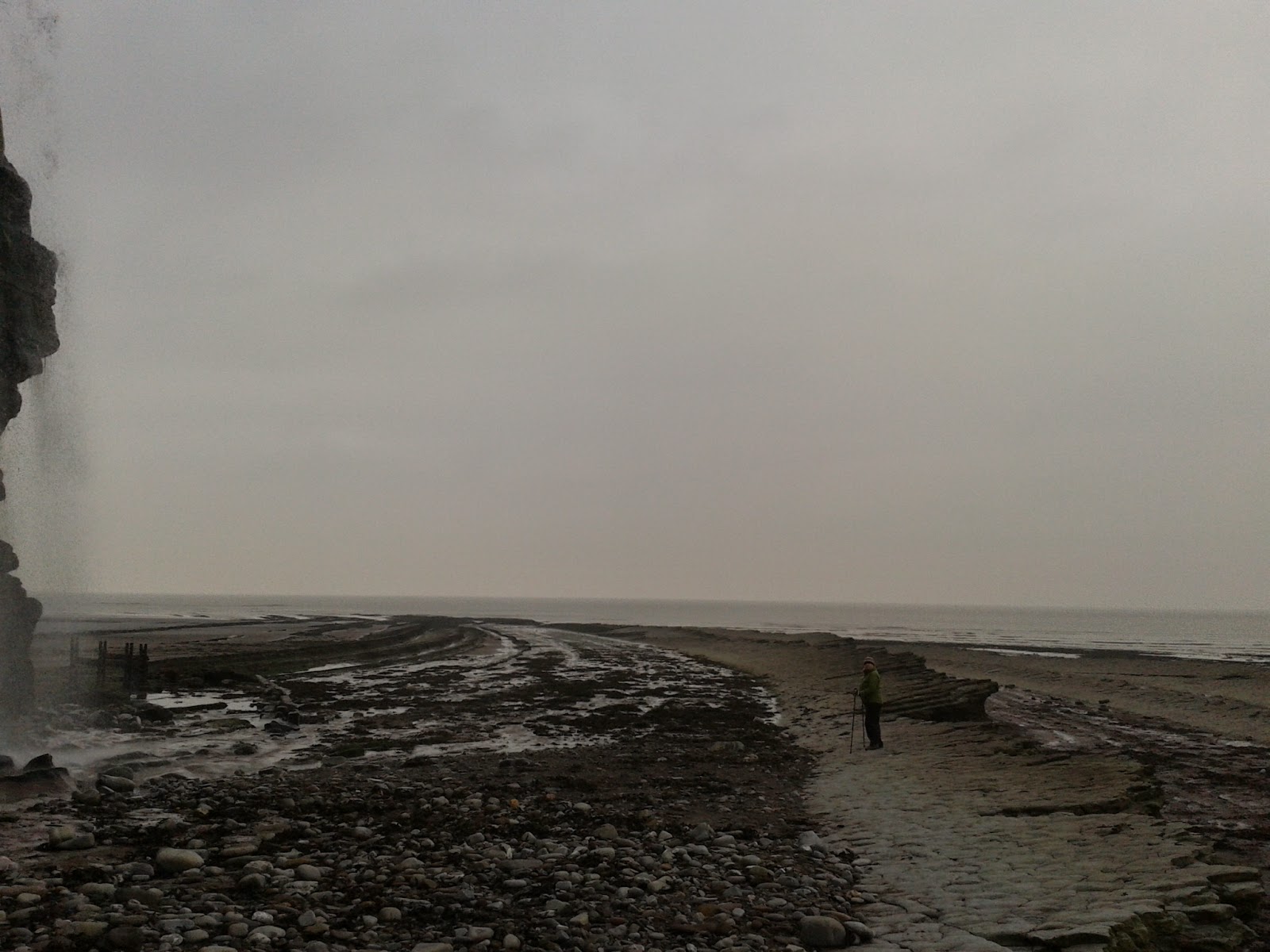 St Audries bay is most interesting for the geology of Somerset. To the East the bay exposes nearly the whole sequence of rocks from the Upper Triassic Mercia Mudstones and to the West of the bay, the beds succeed down to the Lower Jurassic Blue Lias beds. The Aldergrove beds (alternating gray mudstones and limestones) are well exposed. The Lower parts of the Blue Lias beds can be seen higher up walking further West.
http://www.audries.ukfossils.co.uk/Audries-Fossils-Geology/geology-guide.htm

The Quantock Hills are largely formed by rocks of the Devonian Period, which consist of sediments originally laid down under a shallow sea and slowly compressed into solid rock. In the higher north western areas older Early Devonian rocks, known as Hangman Grits, predominate, and can be seen in the exposed rock at West Quantoxhead quarry, which were worked for road building. Further south there are newer Middle and Late Devonian rocks, known as Ilfracombe beds and Morte Slates. These include sandstone and limestone, which have been quarried near Aisholt. At Great Holwell, south of Aisholt, there is a limestone cave, which is the only one in the Devonian limestone of North Devon and West Somerset. The lower fringes around the hills are composed of younger rocks of the Triassic period, these are known as New Red Sandstone rocks which represent the deposits of large river systems that crossed a desert plain, and often contain irregular masses or veins of gypsum, which was worked on the foreshore at Watchet. The scarp is to the west with a dip slope to the east. The west side is cut by combes with broad valleys on the east. The hill tops are open heathland with woods on the slopes.

Several areas have outcrops of slates and between St Audries and Kilve, younger rocks of the Jurassic Period can be found. This area falls within the Blue Anchor to Lilstock Site of Special Scientific Interest (SSSI) and is considered to be of international geological importance. At Kilve are the remains of a red brick retort, built in 1924, when it was discovered that the shale found in the cliffs was rich in oil.[55] At Blue Anchor the coloured alabaster found in the cliffs gave rise to the name of the colour "Watchet Blue".