After we came over  the Alps we found ourselves exhausted, culture shocked and in the lea of the Black Forest. This was actually a happy accident, in my ignorance I thought the Black forest was more Bavaria ... Southeast. 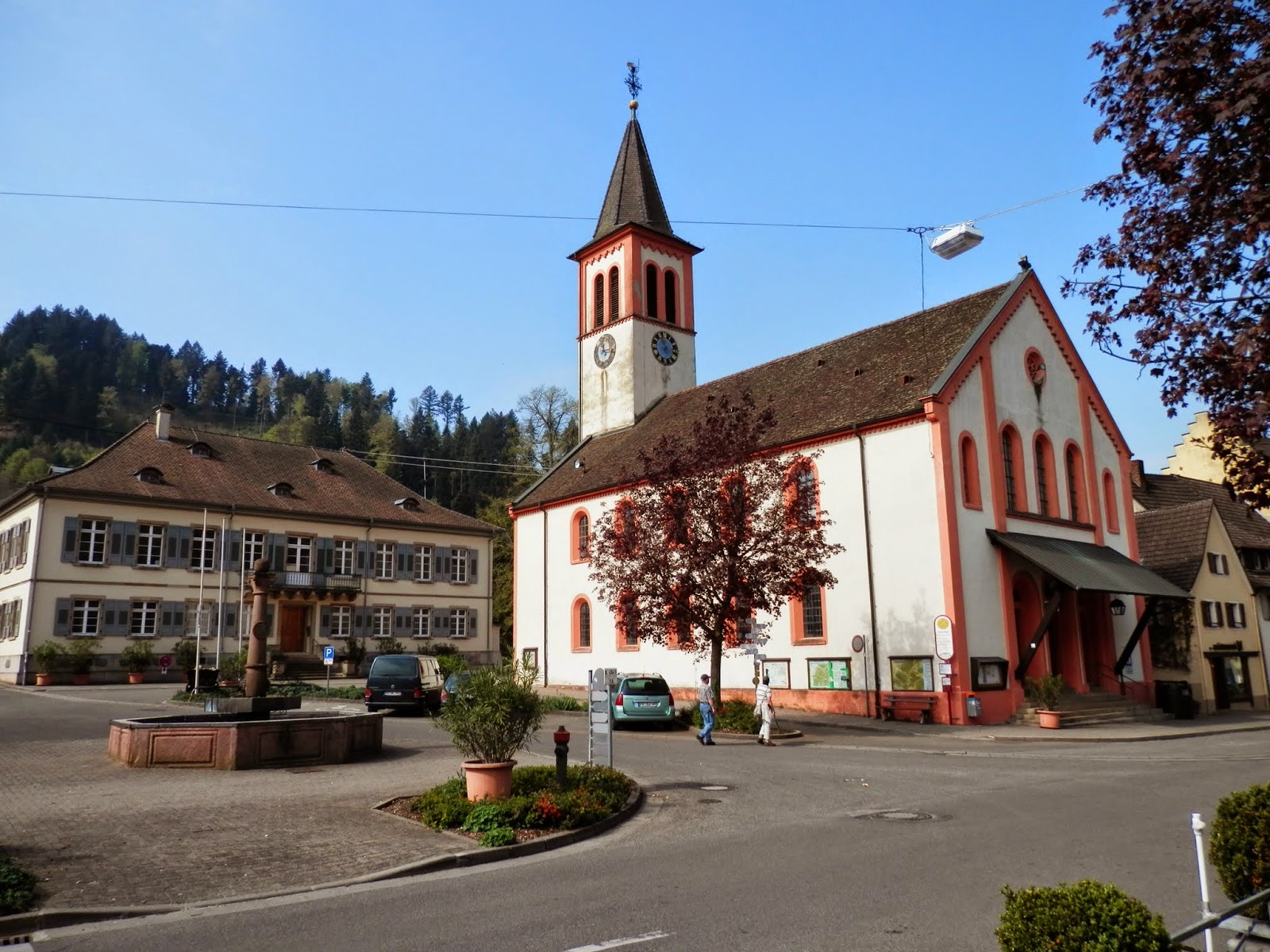 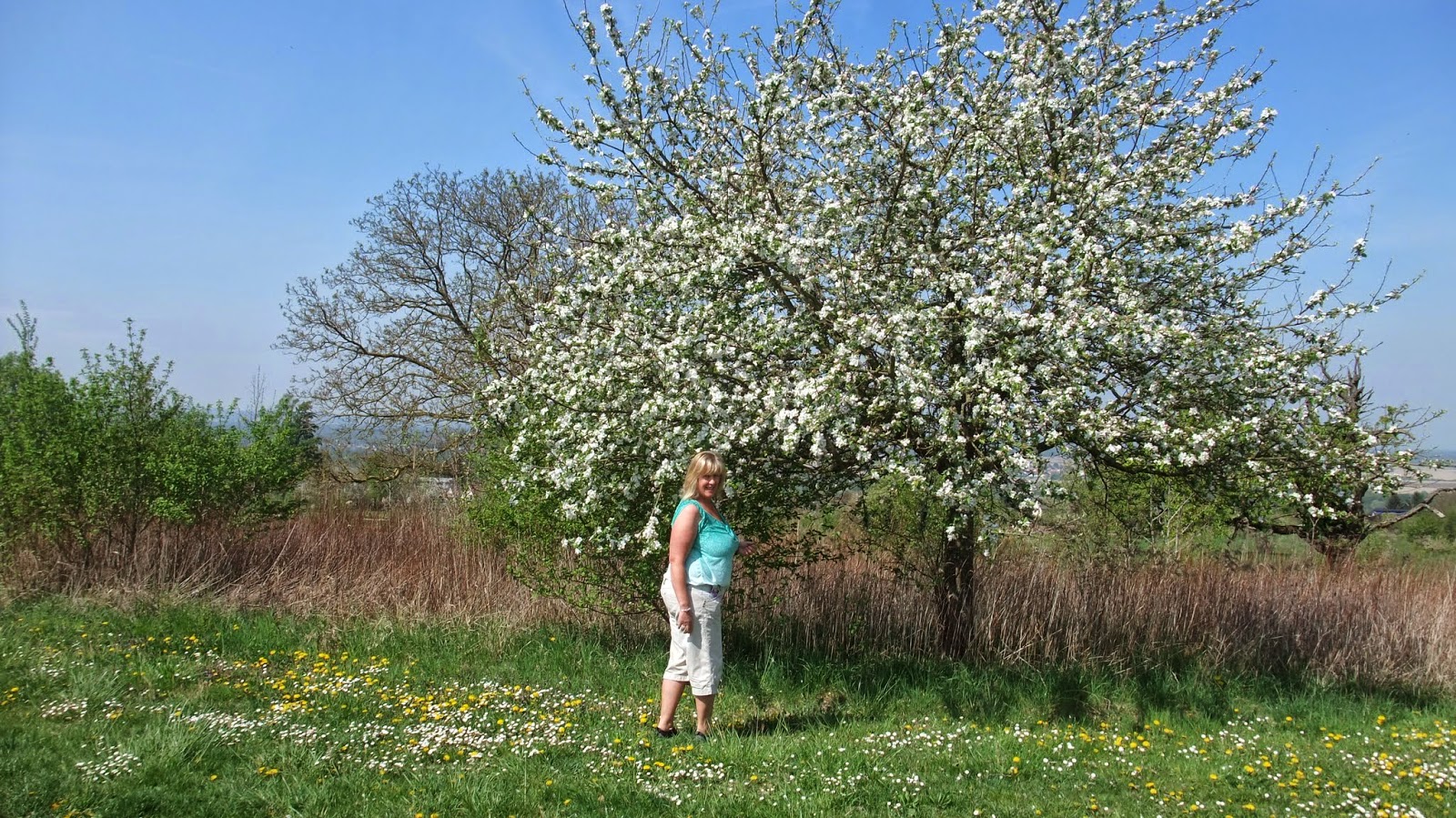 The Black Forest like Pisa is one of those places that’s been with me since very early on in life, whether through a story told by my nan or some early school event I don’t recall ... it could have even been from comic or an Astrix the Gaul story. What I do recall though is this mental image of this mountainous forest, with bears and wolves and snow in winter and being vast. 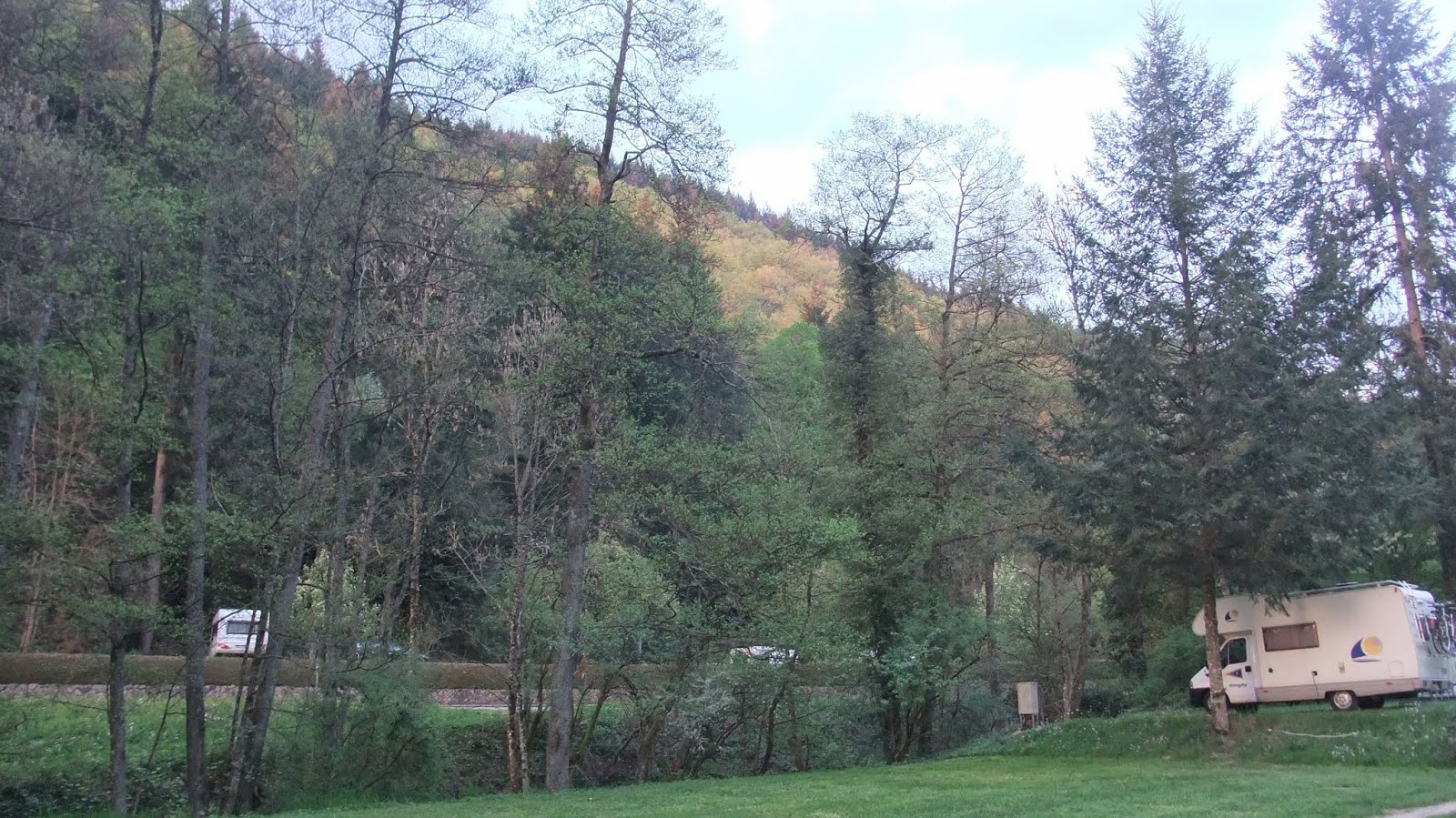 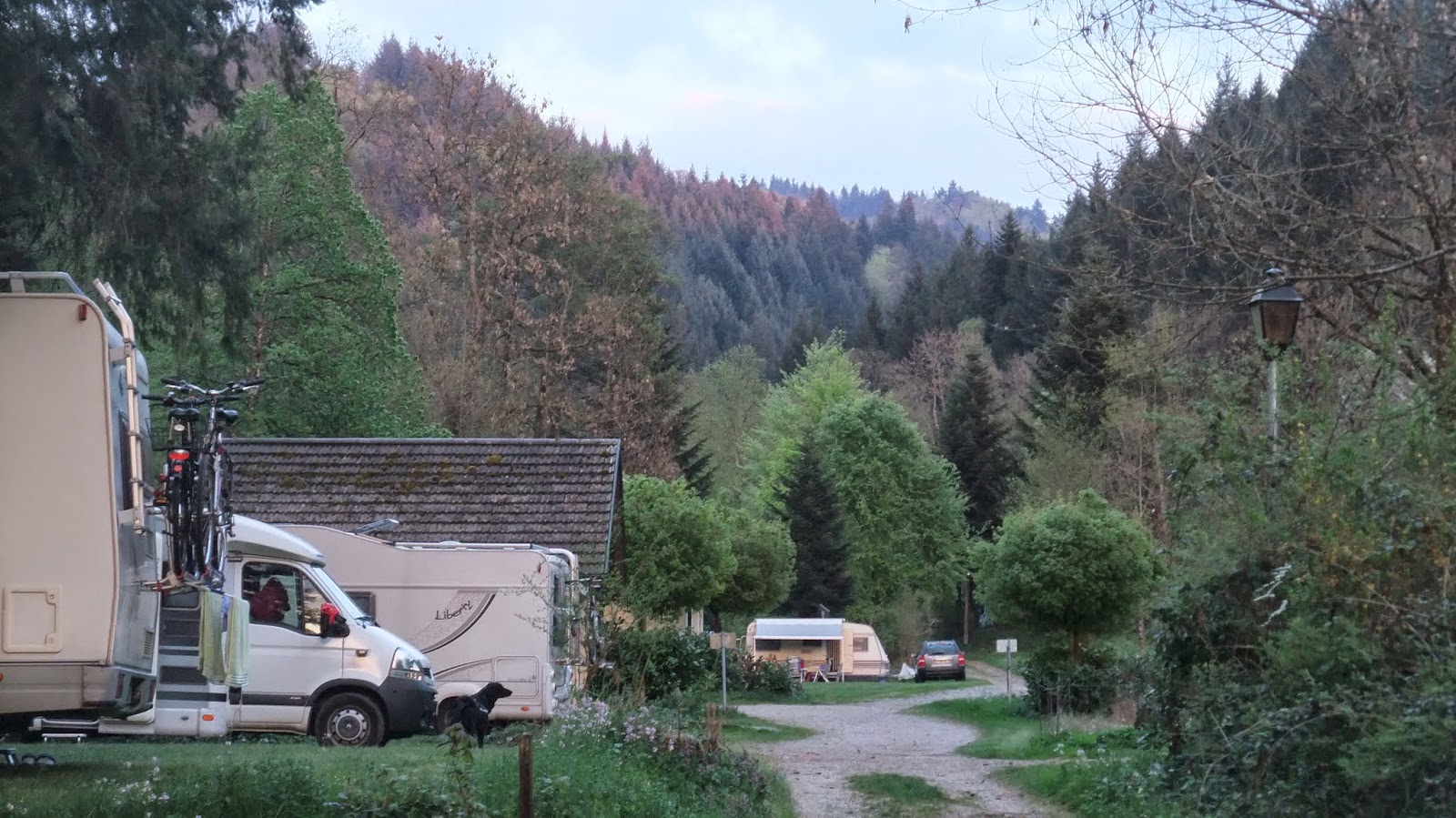 The bears and wolves are gone (wolves for interests sake are still found in isolated packs in northern Spain and Portugal). The hills and mountains will require a little geological time to erode ... ahem.
As the mountains of the forest slowly become lower ... more like very steep rocky forested hills, down towards the levels of Rhine flood plain (the Rhine at this point is both a river and a canal or navigation and there are two broad silvery ribbons winding through the lands come sunset). The trees thin, there are area of vines, the main stems taller than we’ve seen in Spain, Portugal and Italy, but still with only one level of lateral branching and on some only branching in one direction ... like lots of hockey sticks upside down in the ground. 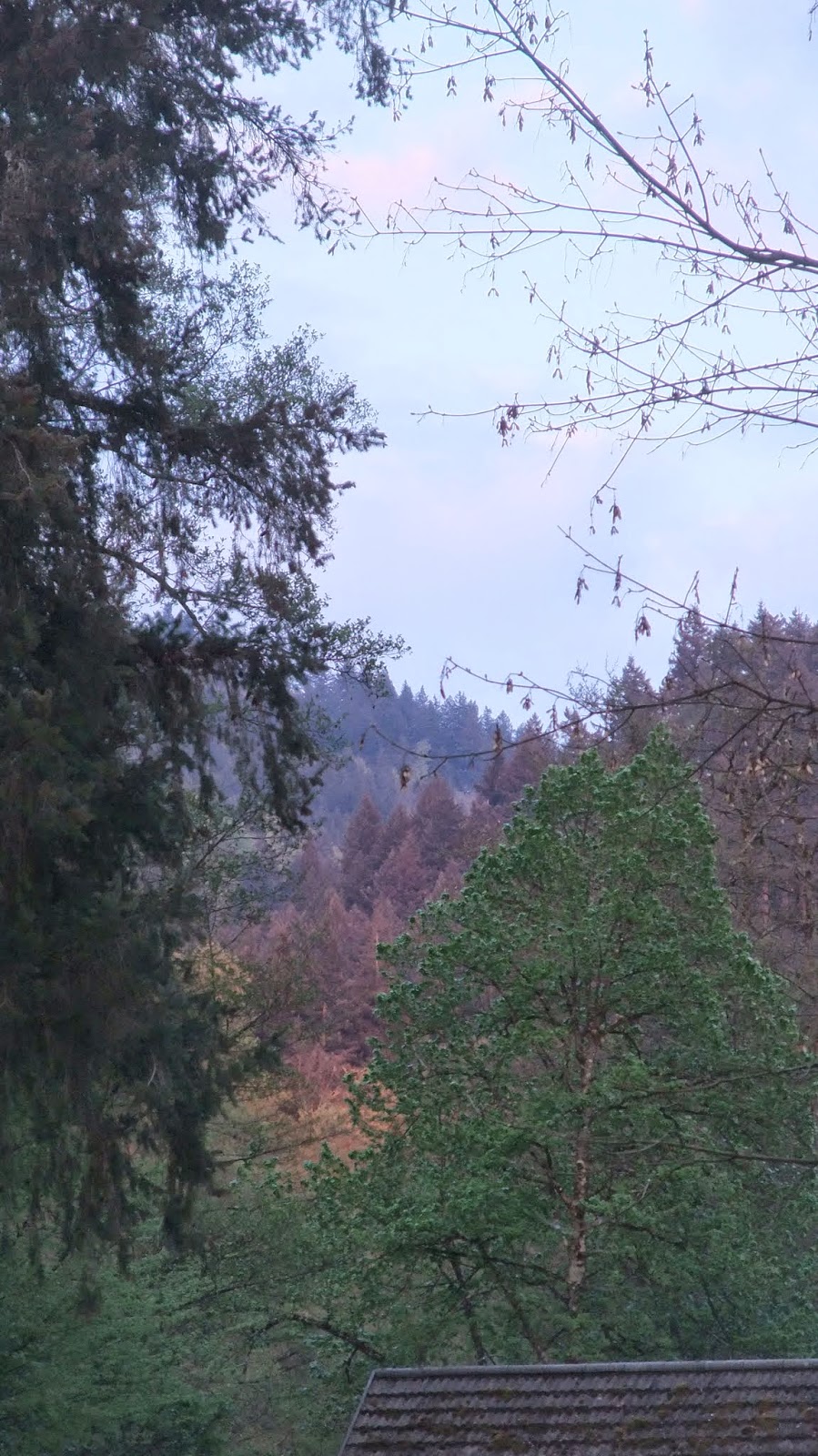 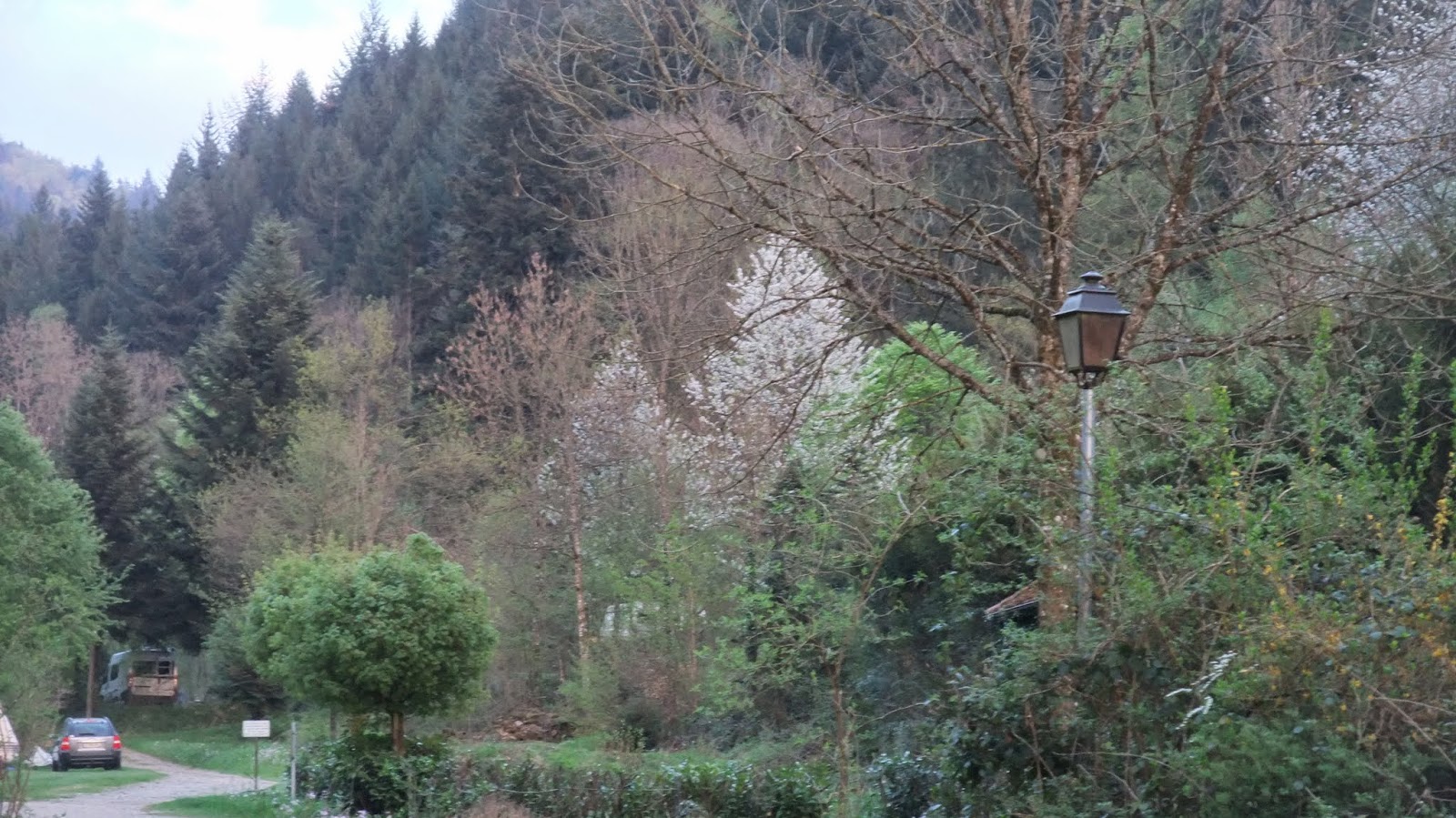 You look behind you and the see the limits of the heat hazed horizon, marked by blue hummocks and humps of mountains, lower down these slopes in the properly visible realm these are many hued shades of green. You look in front of you and you see the wide flat expanse of land the is the Rhineland a vast flat plain extending for maybe ten miles west, before it rises on the French side also to mountains. Lower than the Alps and less jagged looking, but still high enough for the highest plateau’d peaks to hold snow. When you look north the flood plain seems to be without limit, it just fades to and indistinct muzzy blue white haze. I was reminded of some areas along the river Nile, the difference being that when the mountains either side of the Rhine plain ascend, they are green and lush, where the Nile is variously buff, dun or beige. 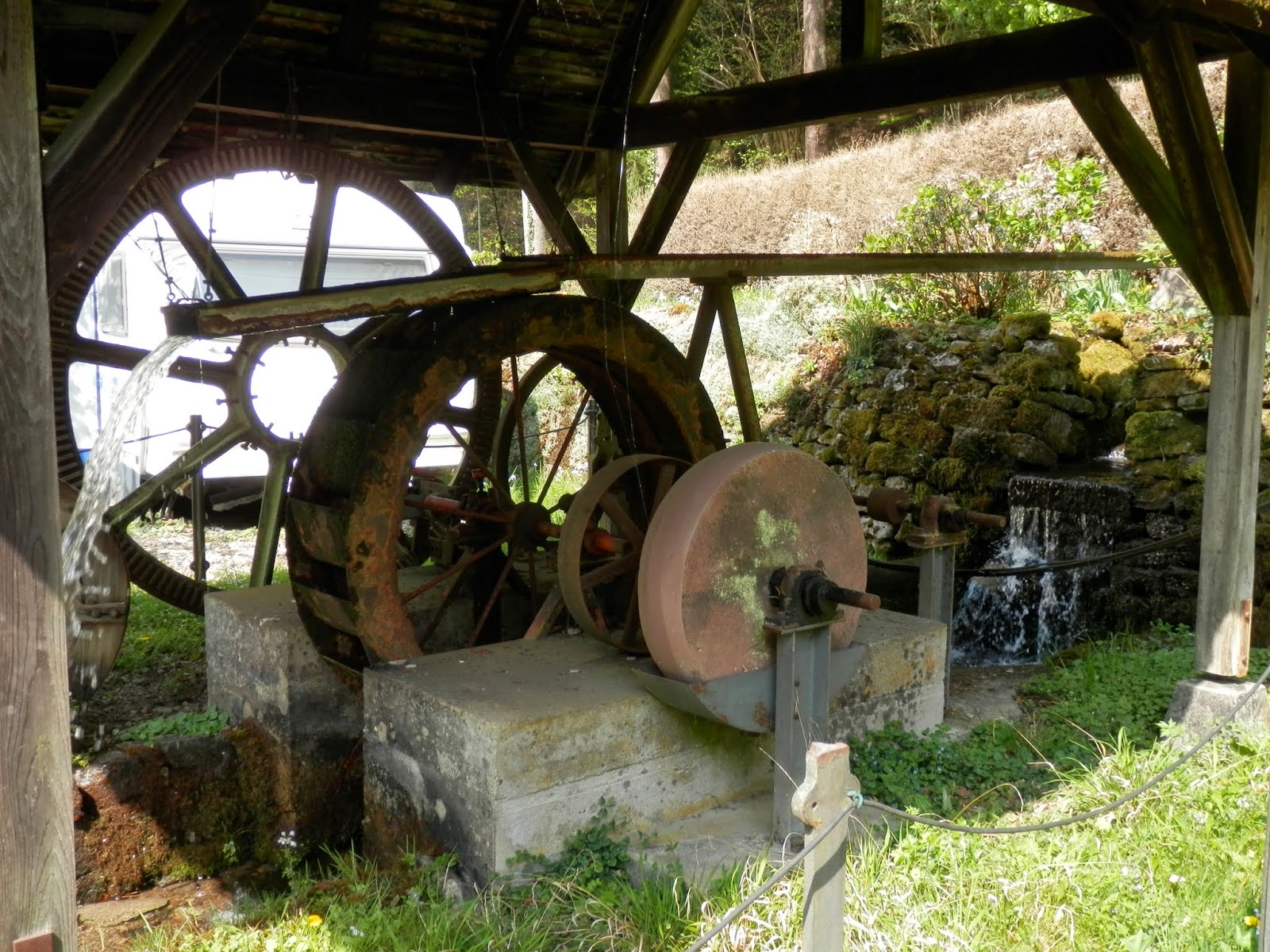 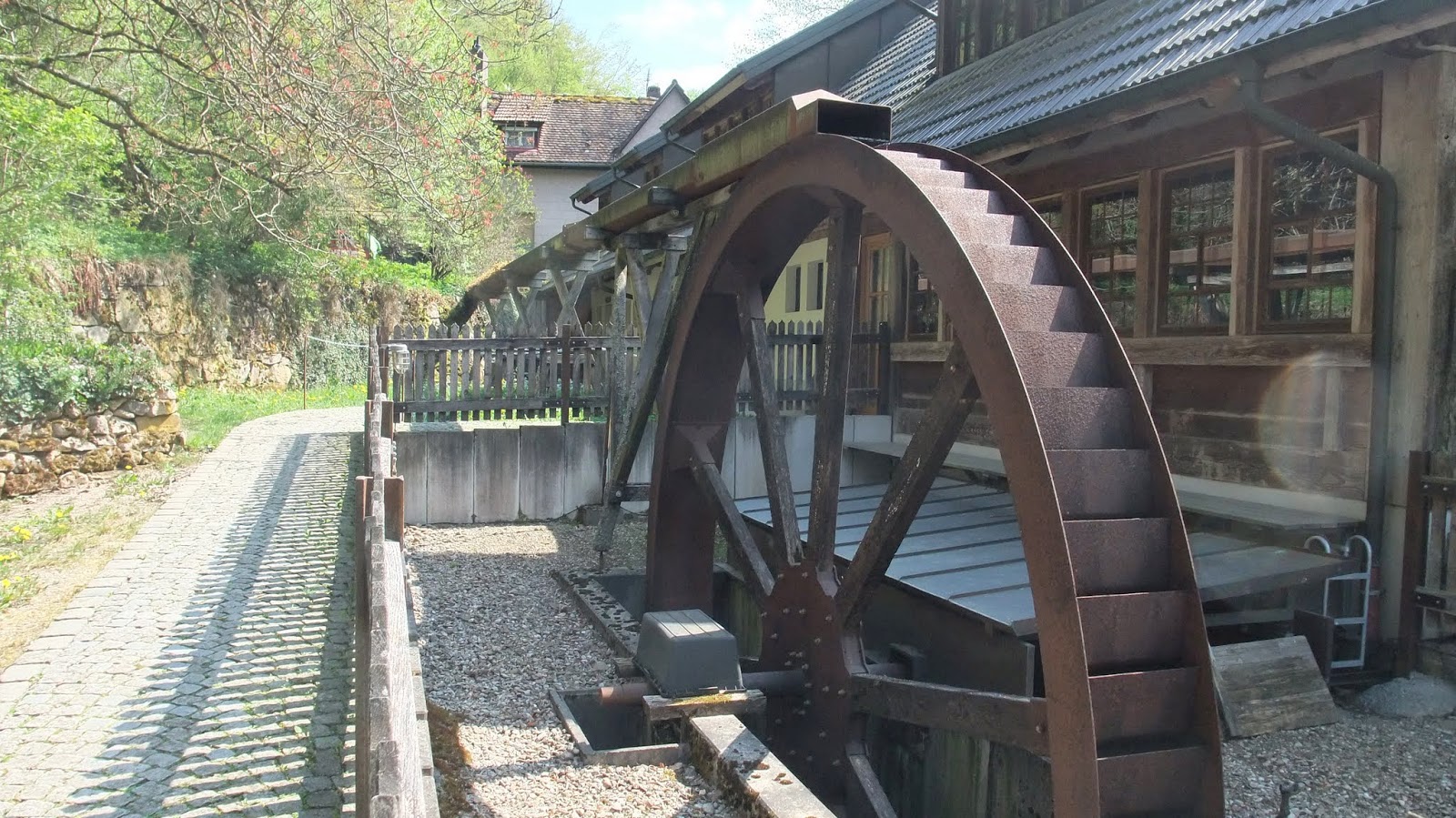 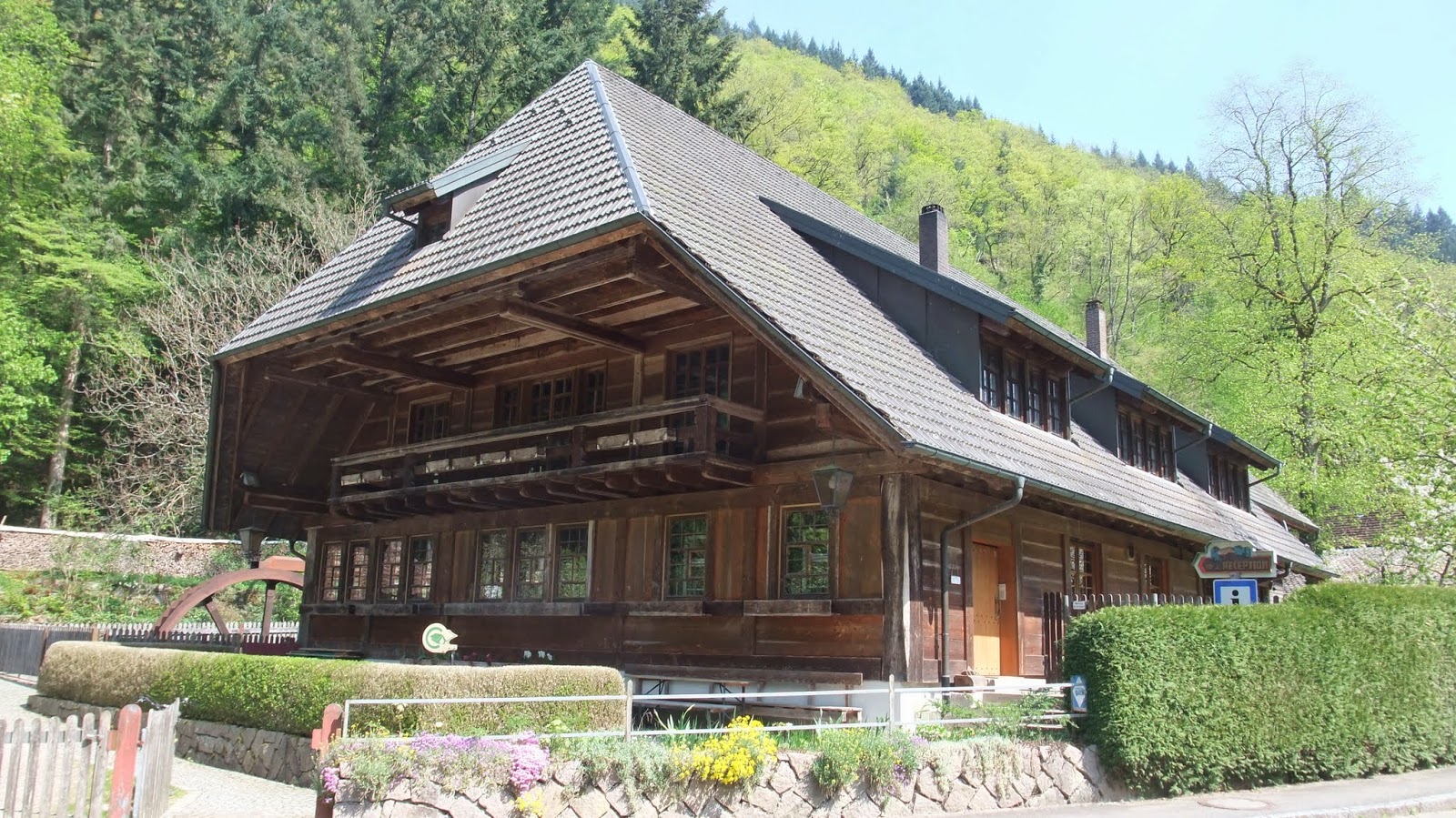 So that’s the banks and lea described. What about the forest itself? It’s vast; thirty by ninety miles approximate in `plan’, but I suspect that if you flattened it out it would quadruple in overall area. In places you can’t see twenty feet in front of you and in other places you can see mountains receding to the blue limit noted above, but inwards east into the forest deeper. There is a mix of deciduous and coniferous wood, as noted in an earlier post. We caught it at the right time because the deciduous trees were still in very early leaf, meaning that they still allowed through a lot of light. In the conifer areas, there are bits that are deathly silent and dark, so much so that that you are momentarily blinded as you exit into a glade or the sheer vertical V of a valley that marks the place where two enormous geological teeth meet. The Black Forest was so named because in the past it was impenetrable and dark, we know why. 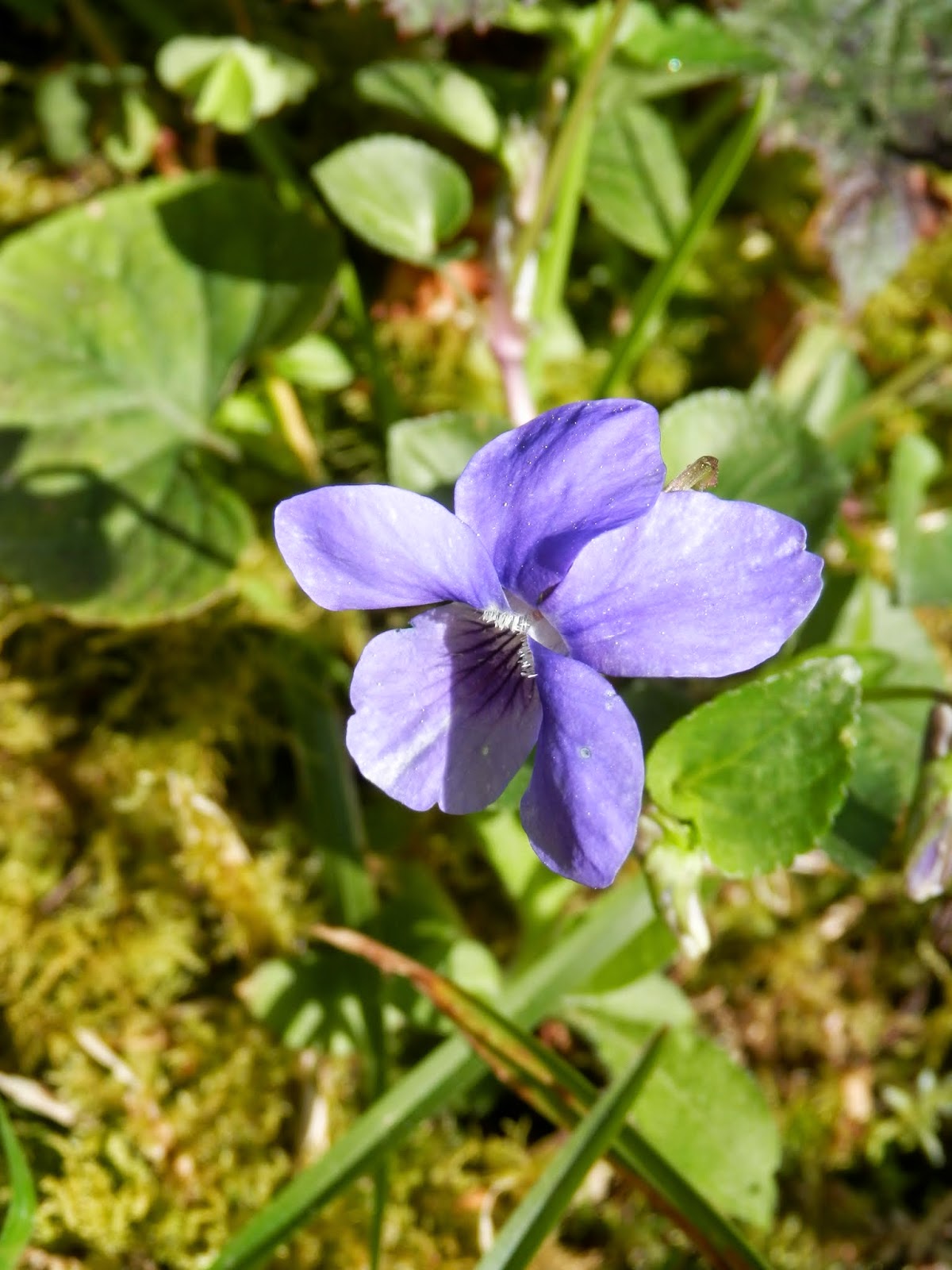 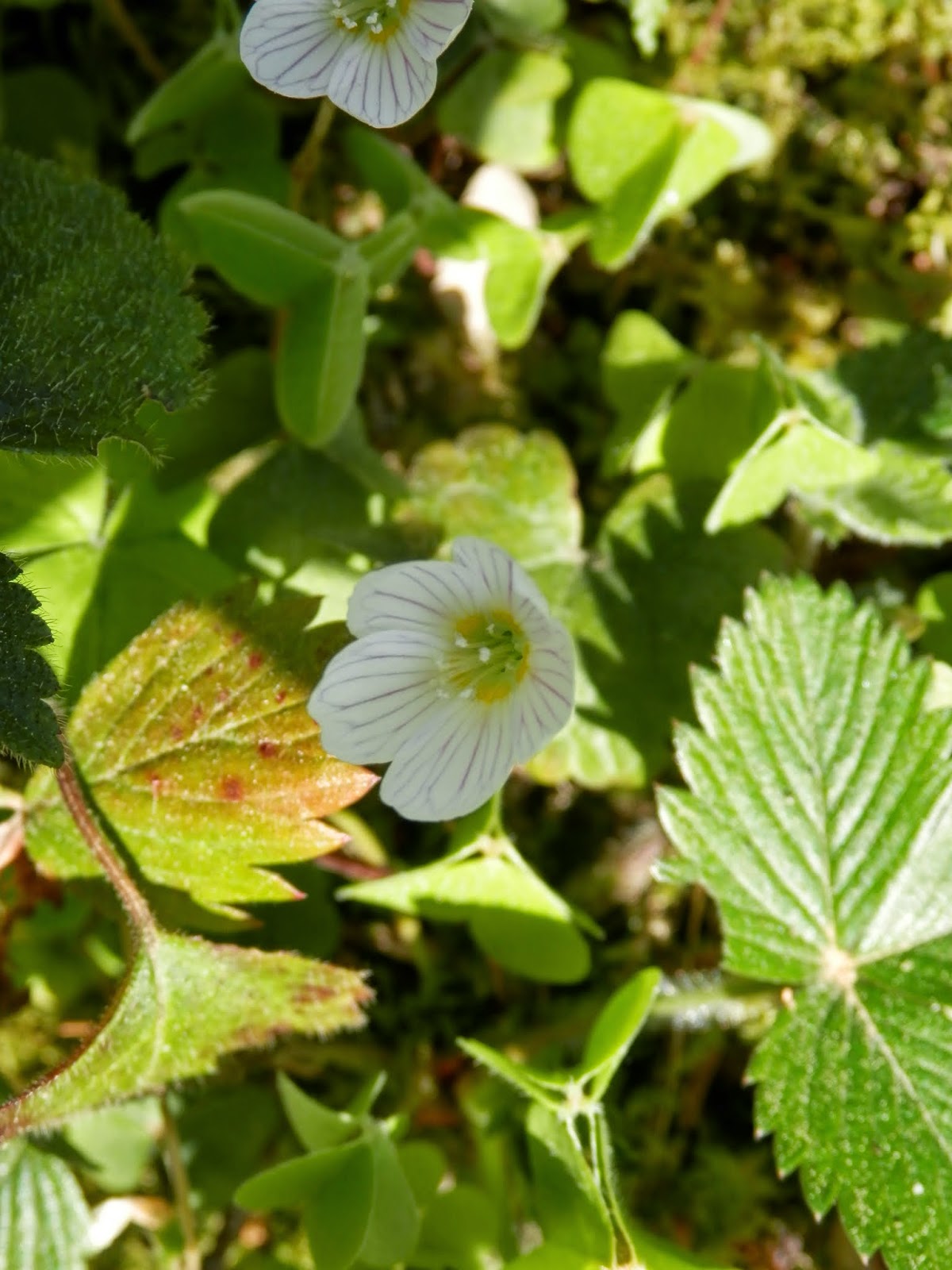 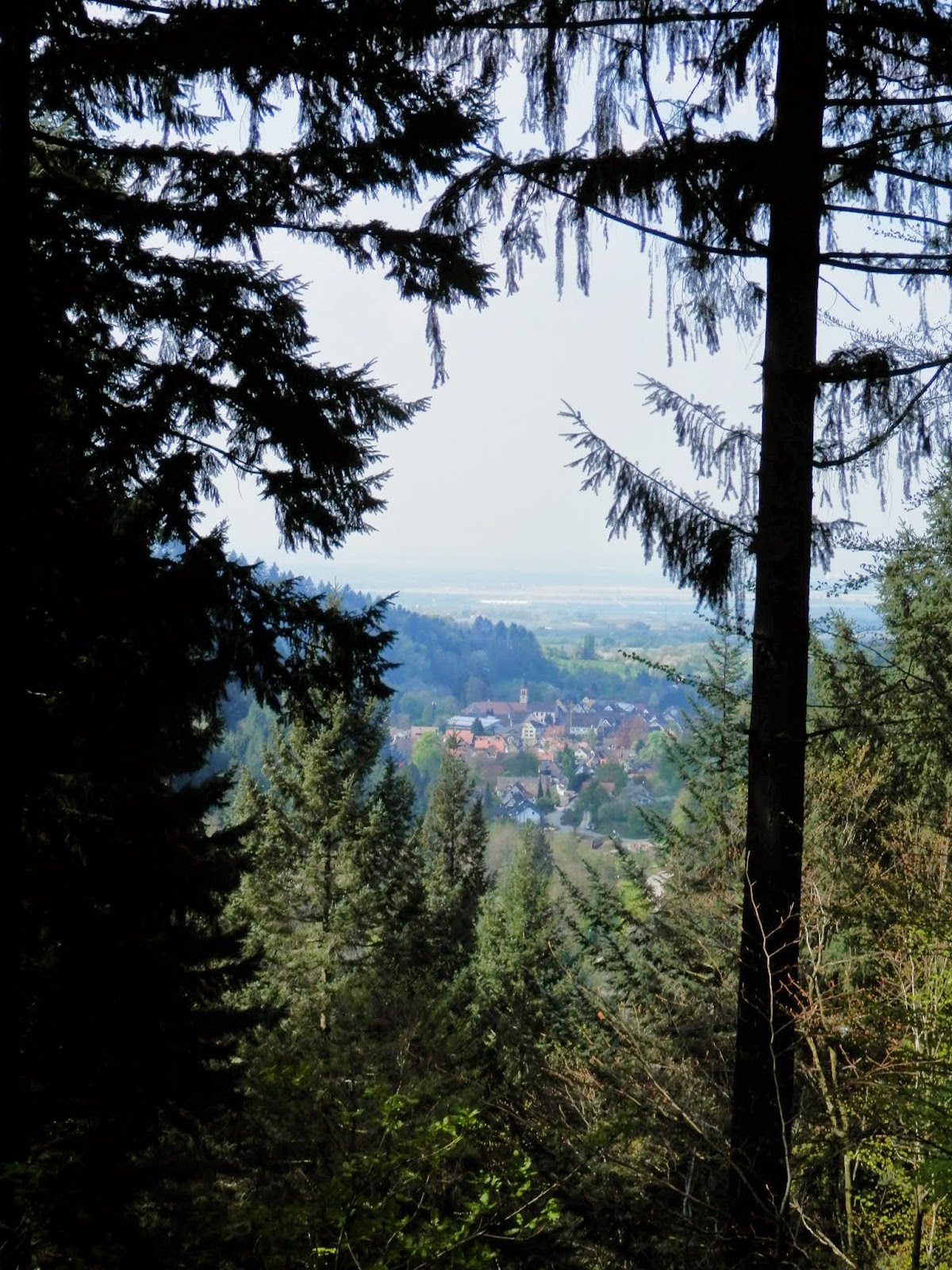 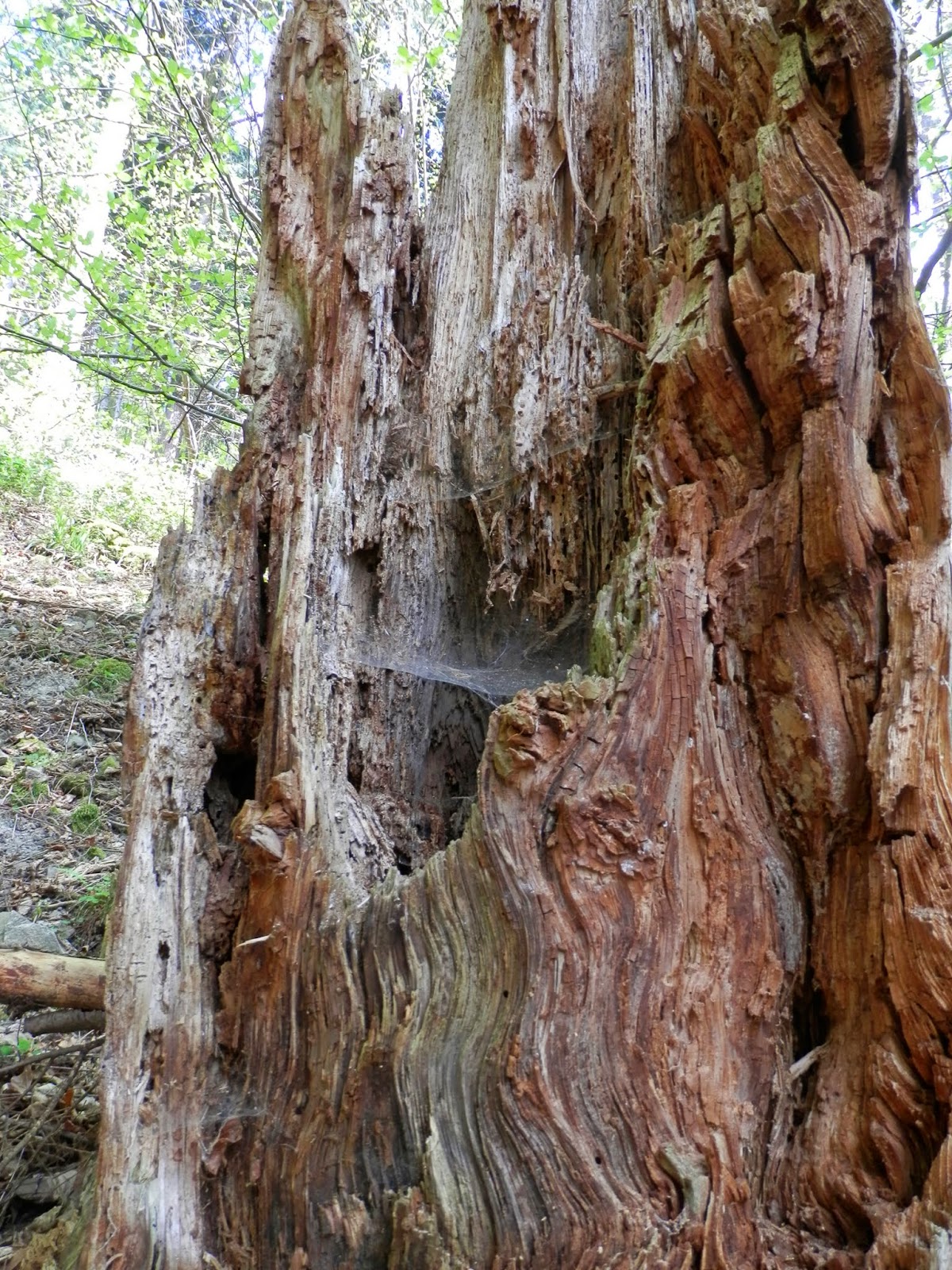 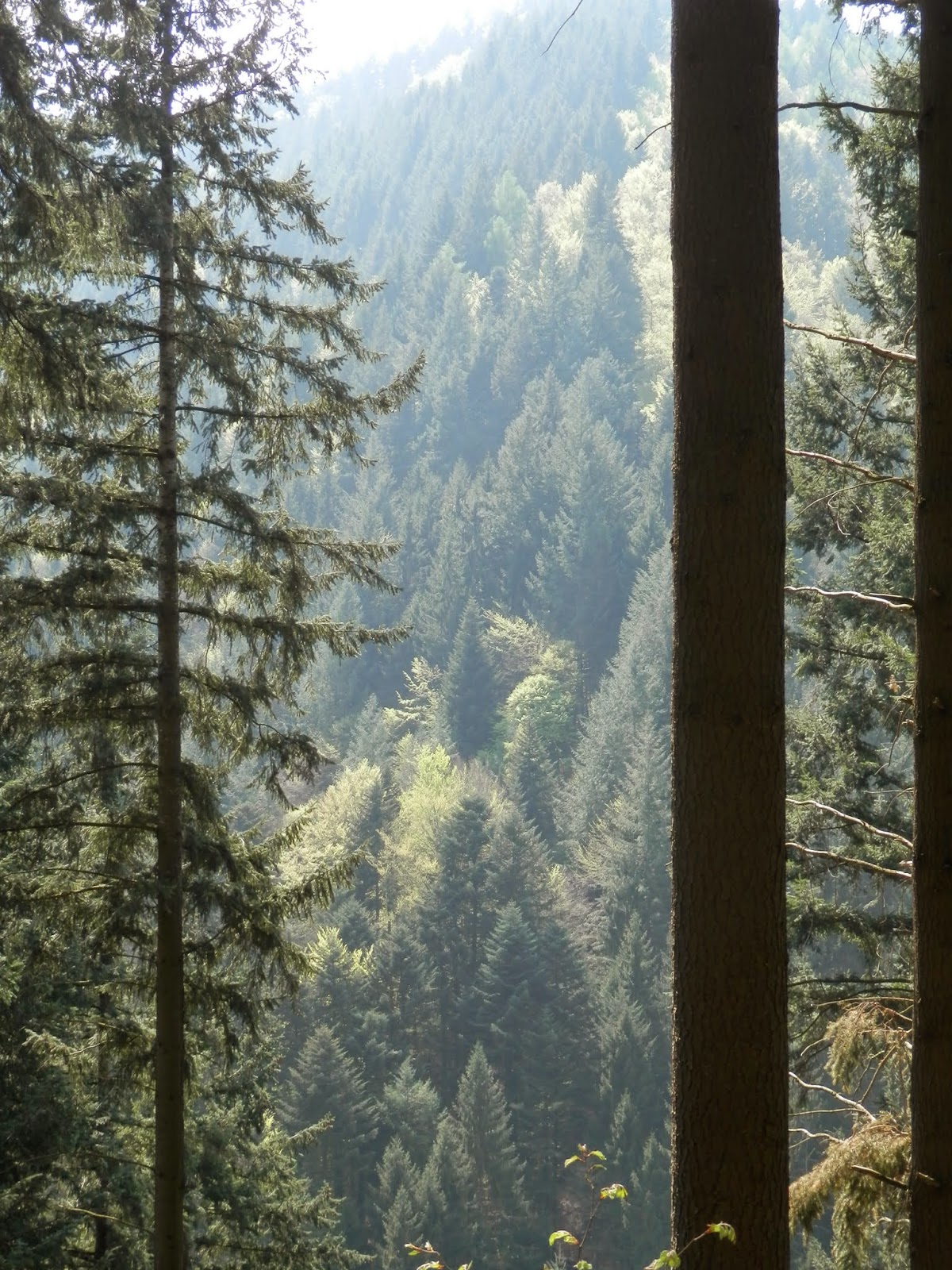 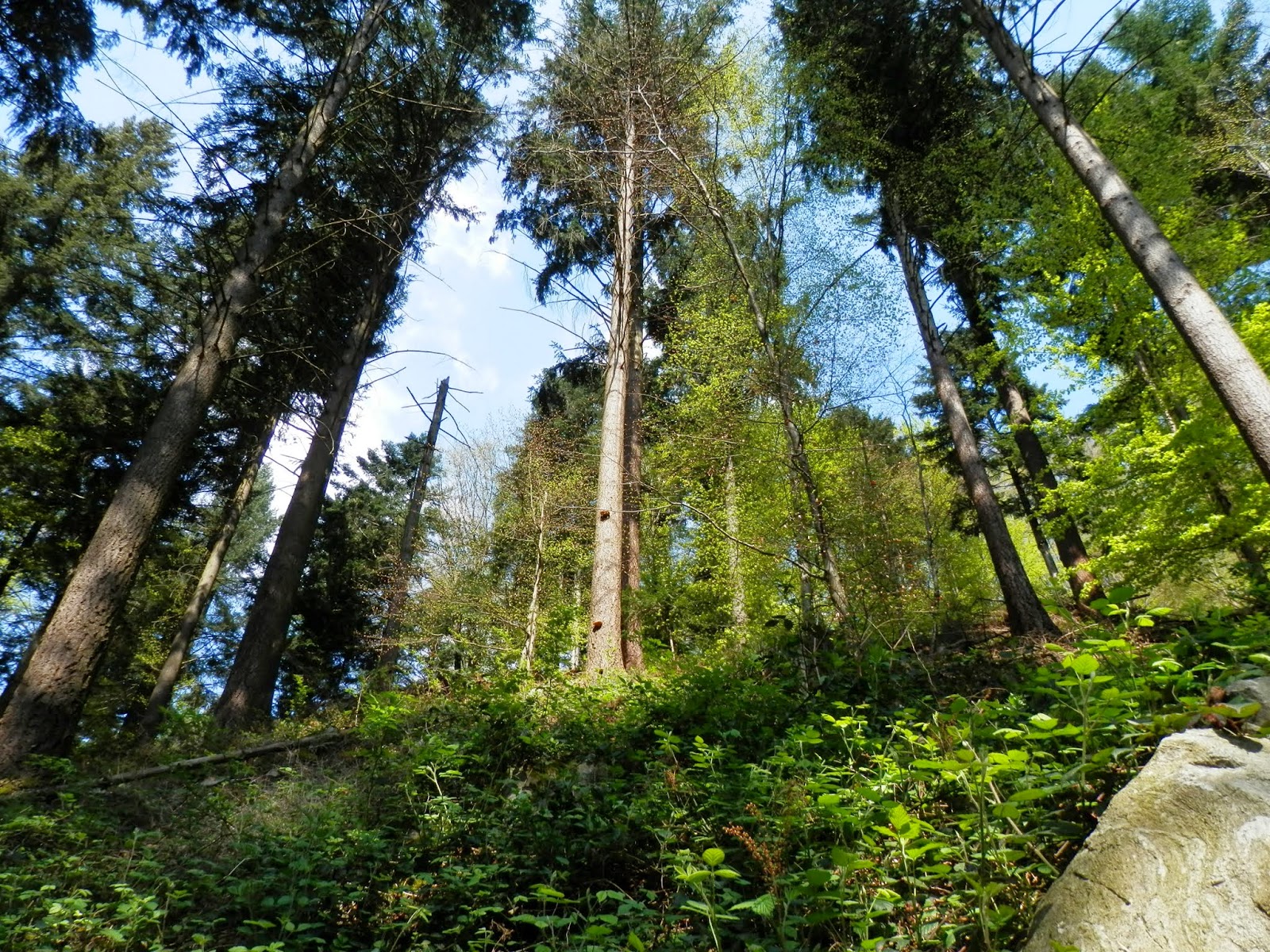 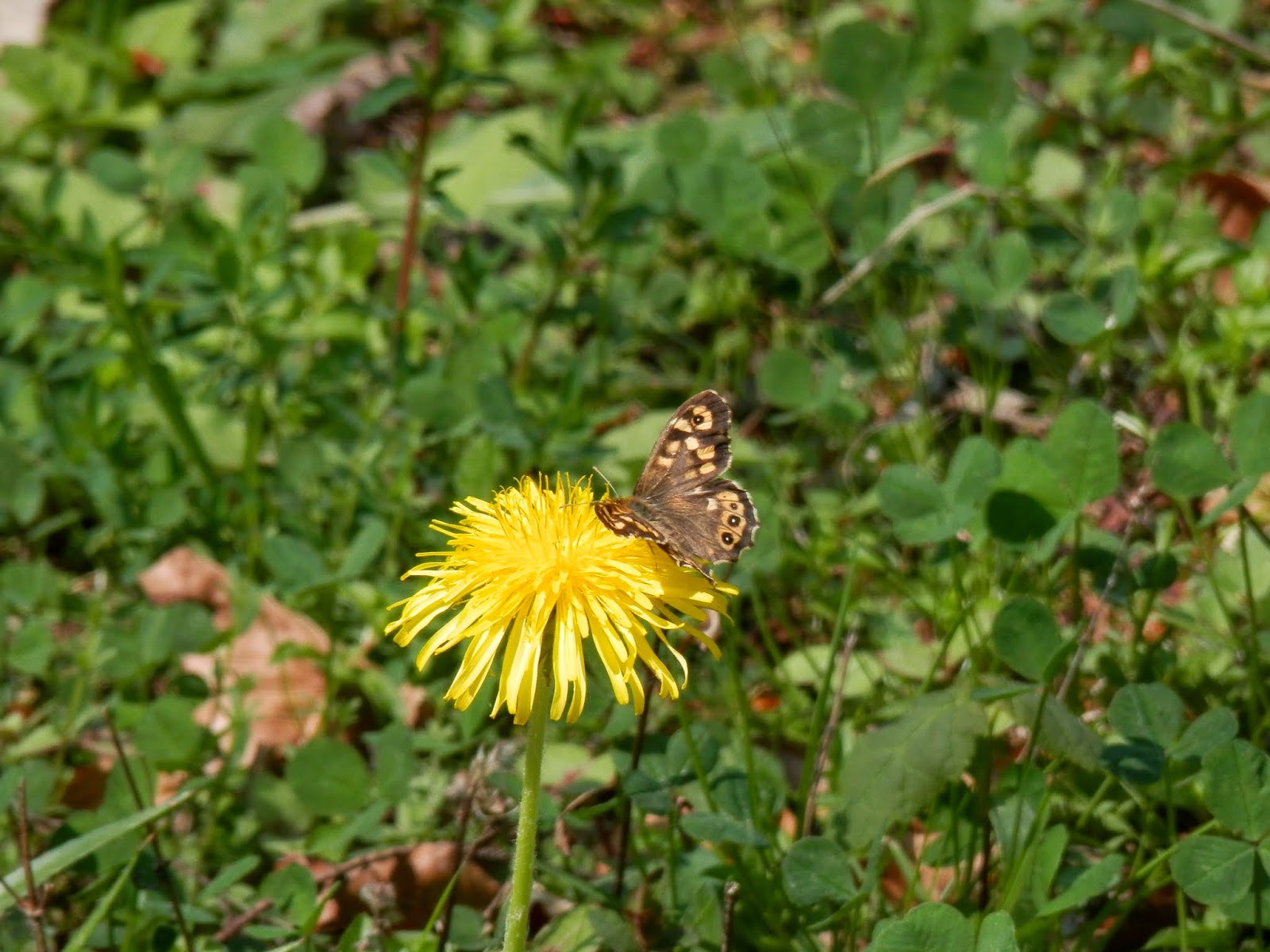 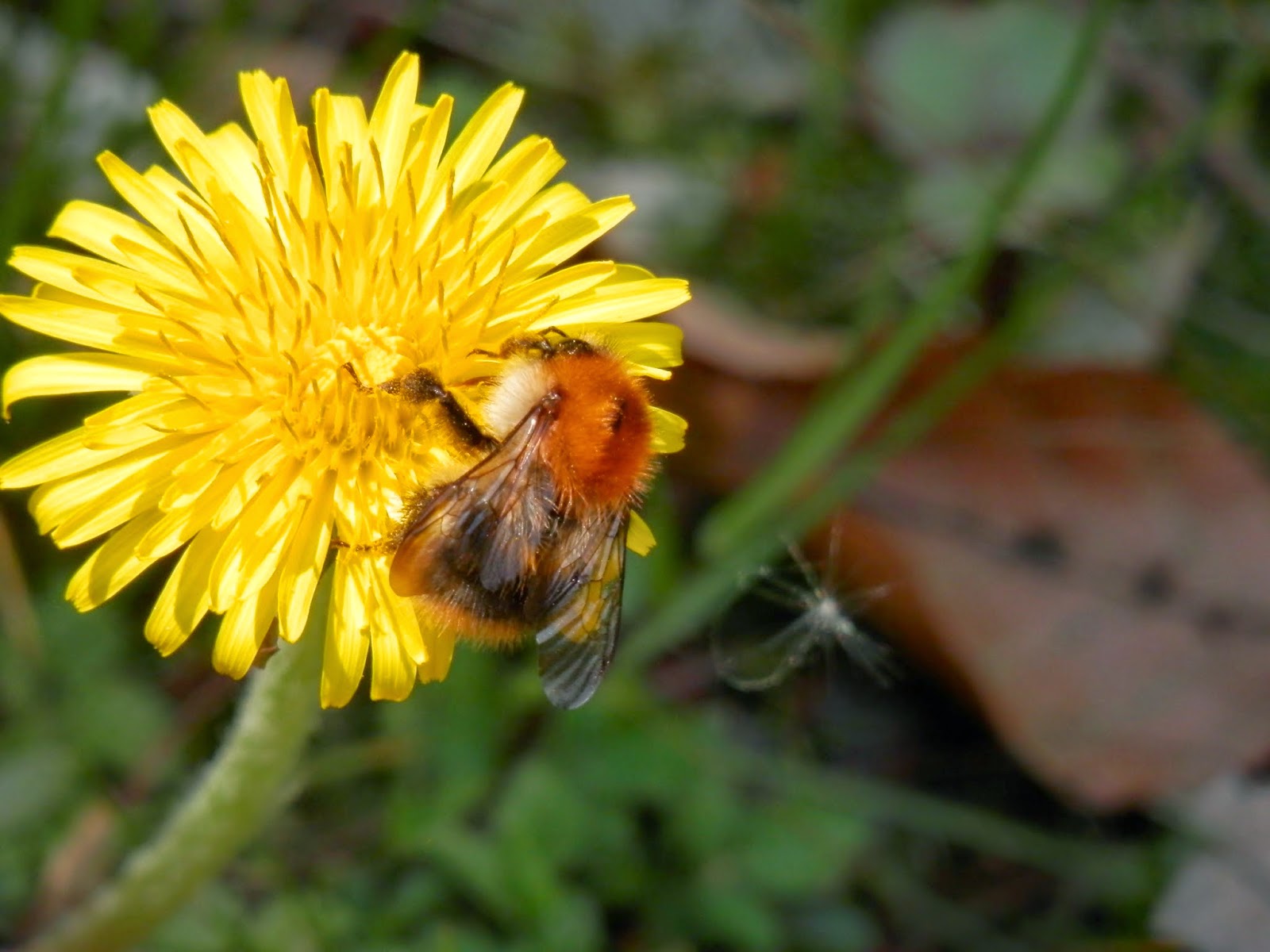 There are springs and waterfalls, like those we saw in Pont das Tres Entradas in Portugal a few weeks ago. So similar but so different, however to try and describe the ways they differ would be the job of a poet maybe. It’s something and nothing. The air, the moisture it carries, the song birds, the and tinkling and gurgling of streams and rills hidden in clefts echoing and being amplified by the apparent stillness in the most sheltered hollows, the rustle of leaf litter as you walk, and the sssshhhhhh of the breeze tickling the emerging leaves higher up the canopy, maybe even the distant background hum of motorways and industry. Maybe the reason is because it’s mythical and your deep animal brain recognises that it’s a place where you could get lost ... maybe even forever. 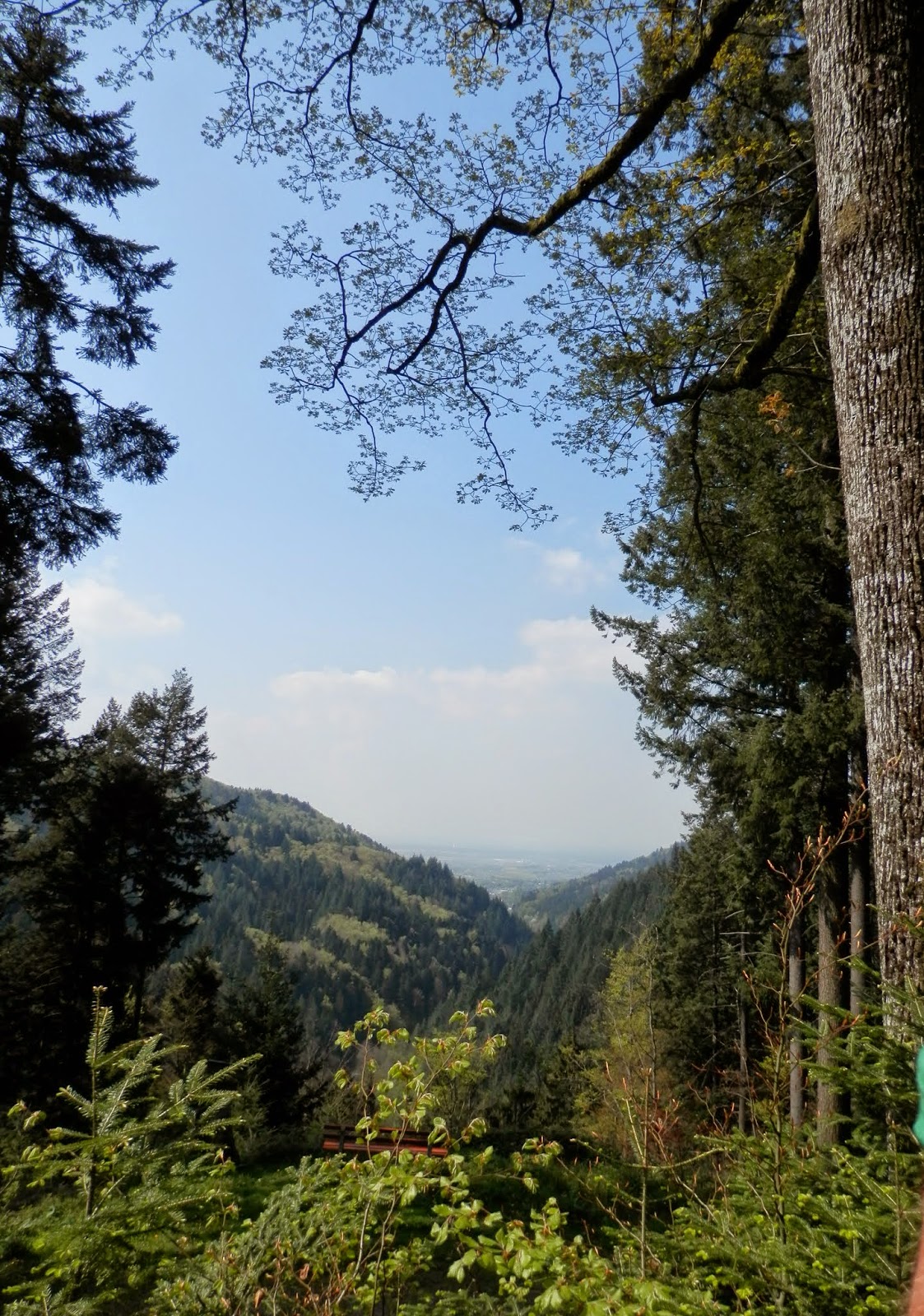 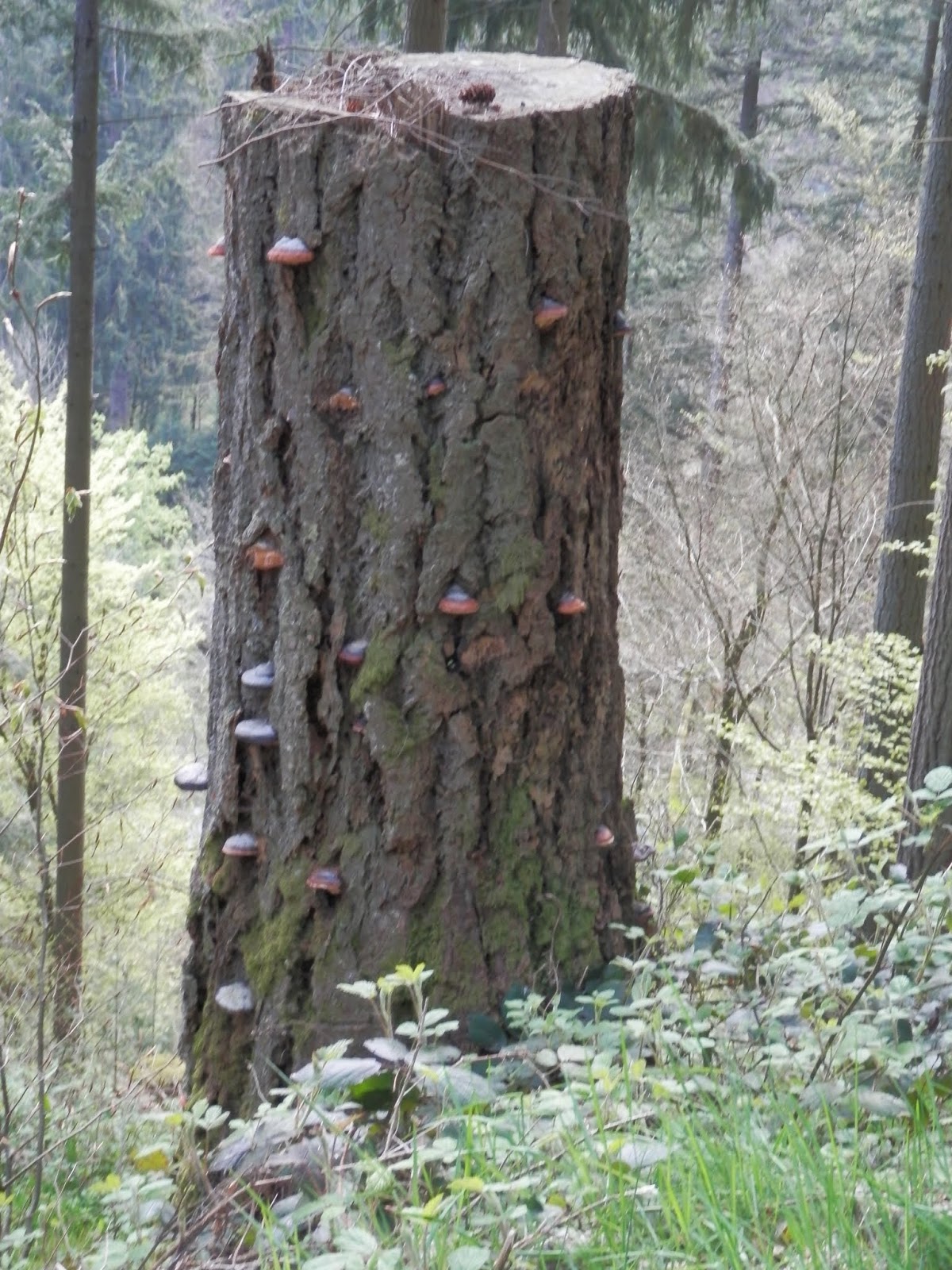 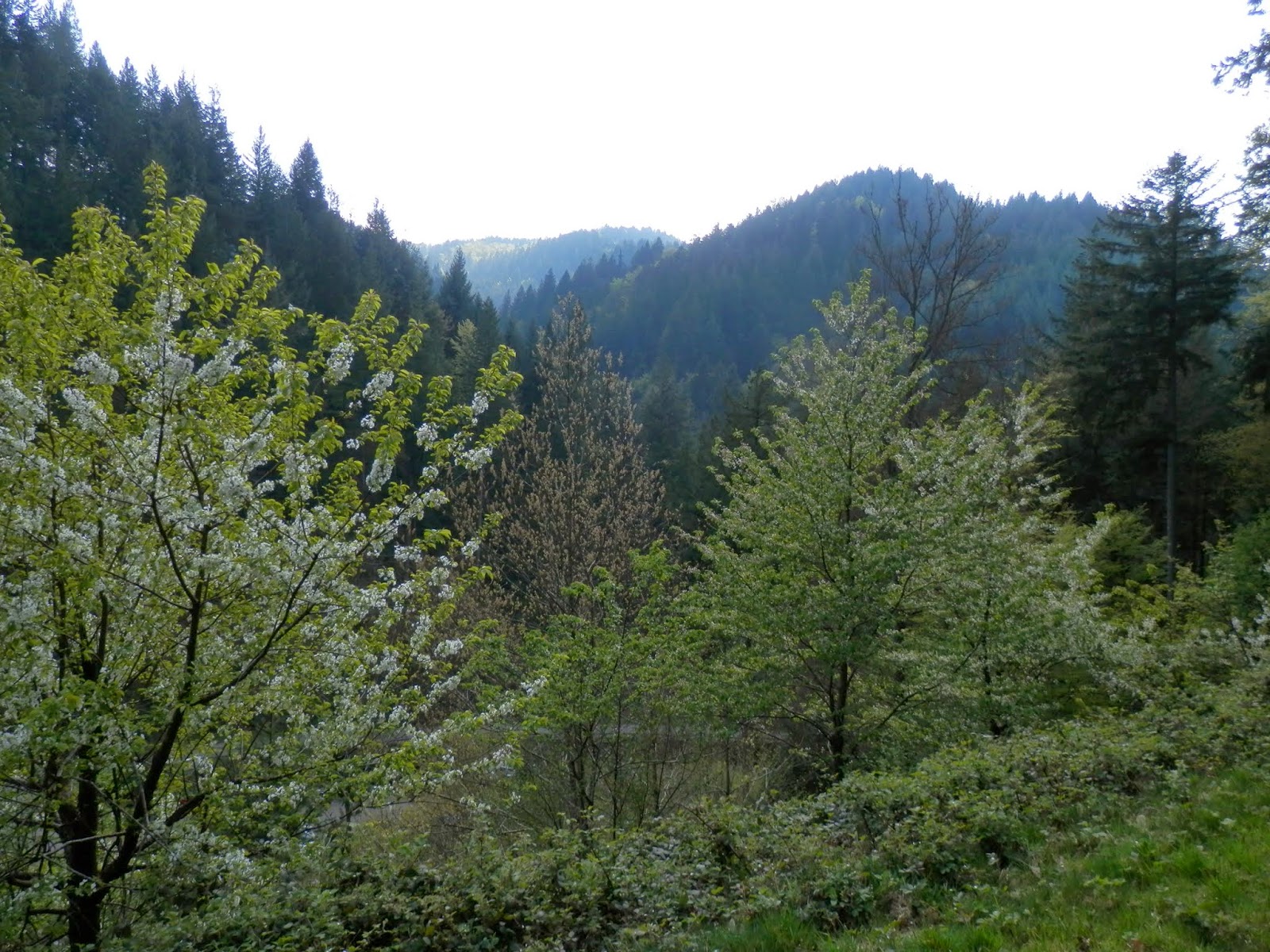 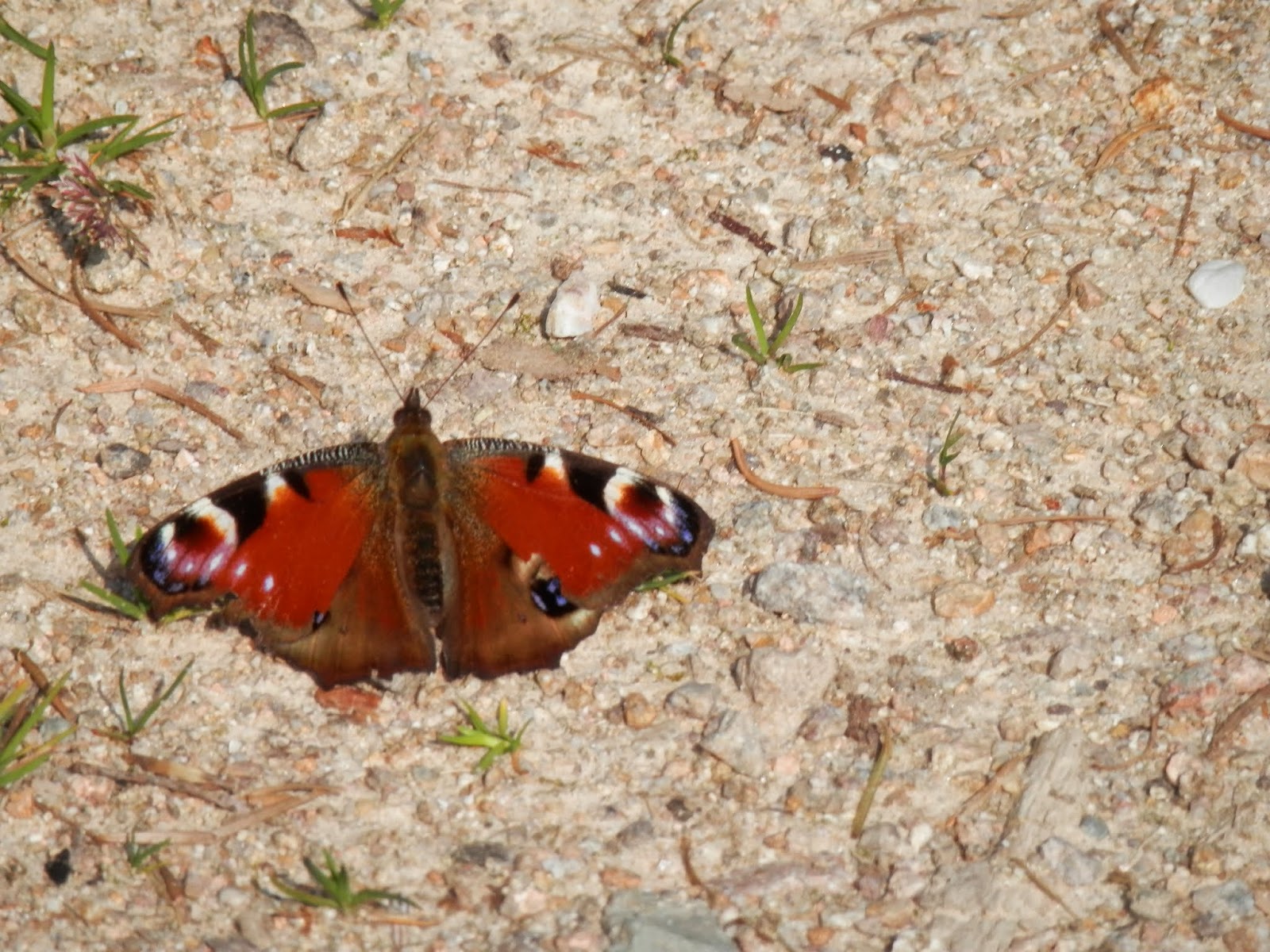 Where trees fall they are left as long as they don’t present a danger, this can mean an overturned pine (as pictured) can become a microcosm of the surrounding wood, with its own tiny forest of seedling pines no taller than my thumb is long, interspersed with tufts and hummocks of moss, both black and green, seedling herbaceous weeds sprout and bracket fungi forms fairy towns and castles in the now lateral crevices of the trees bark. And amongst all this flora wander the tiny six legged actual inhabitants of this world tree, beetles and ants, spiders, bugs butterflies in all shapes colours and sizes. 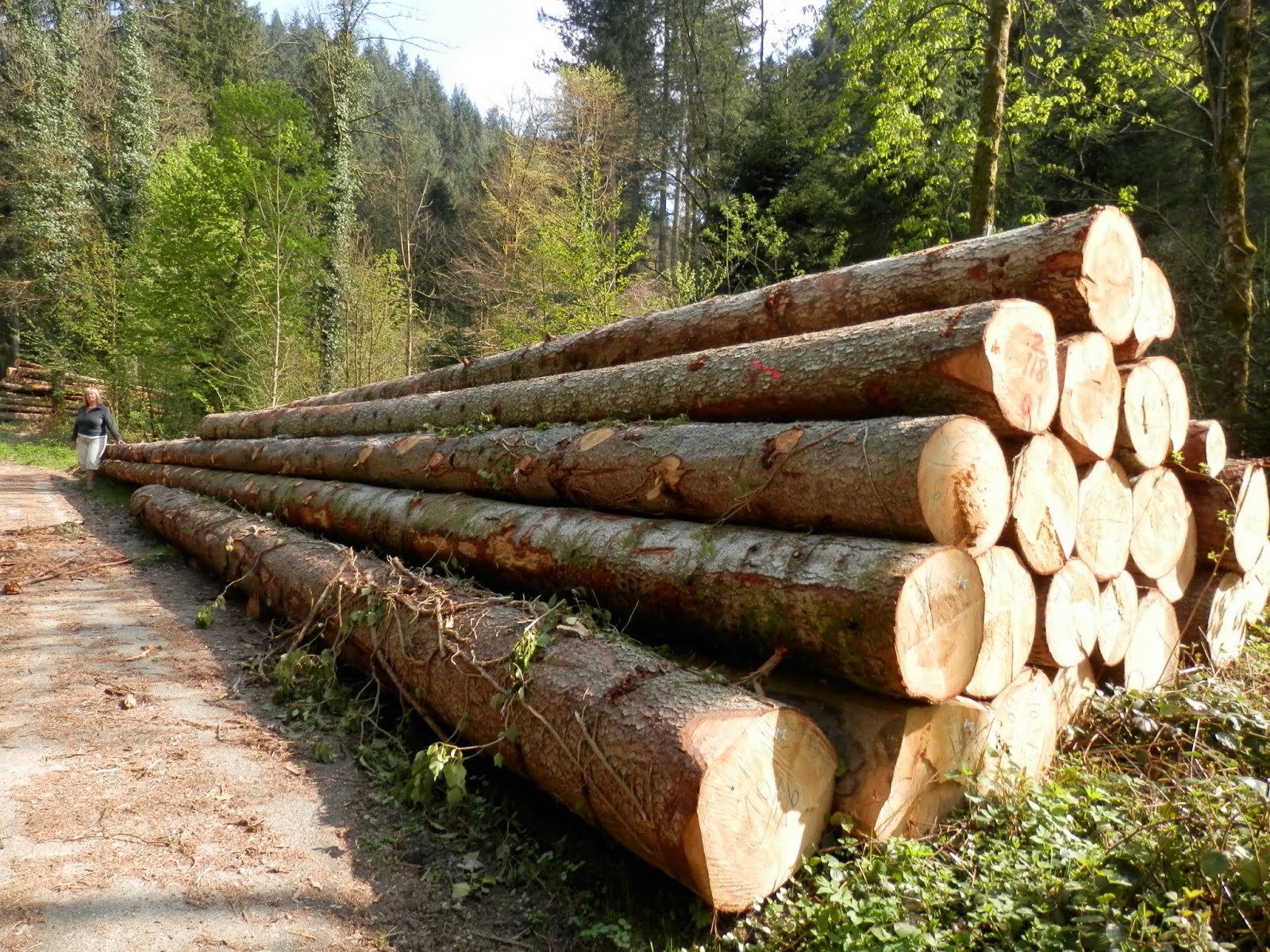 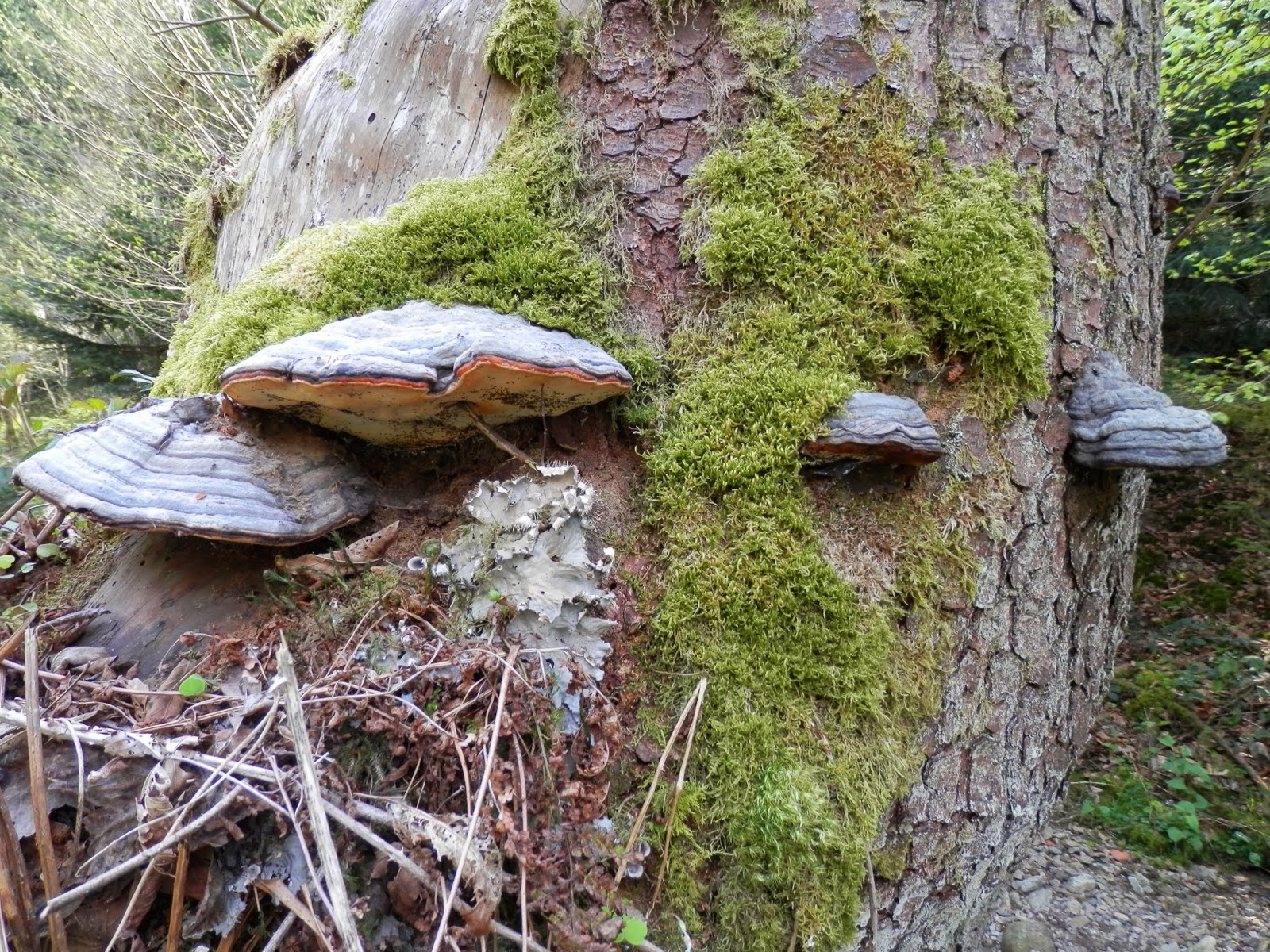 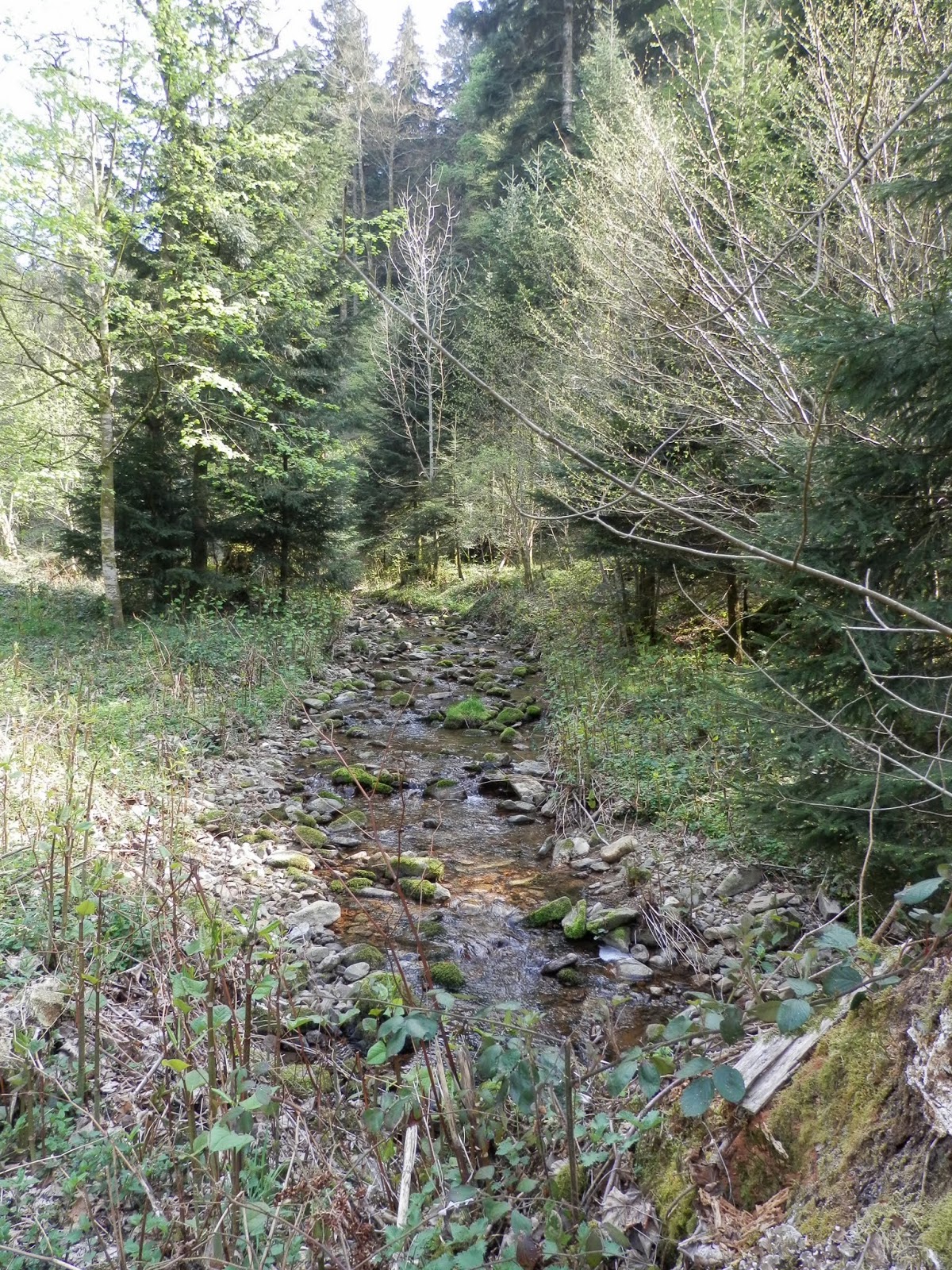 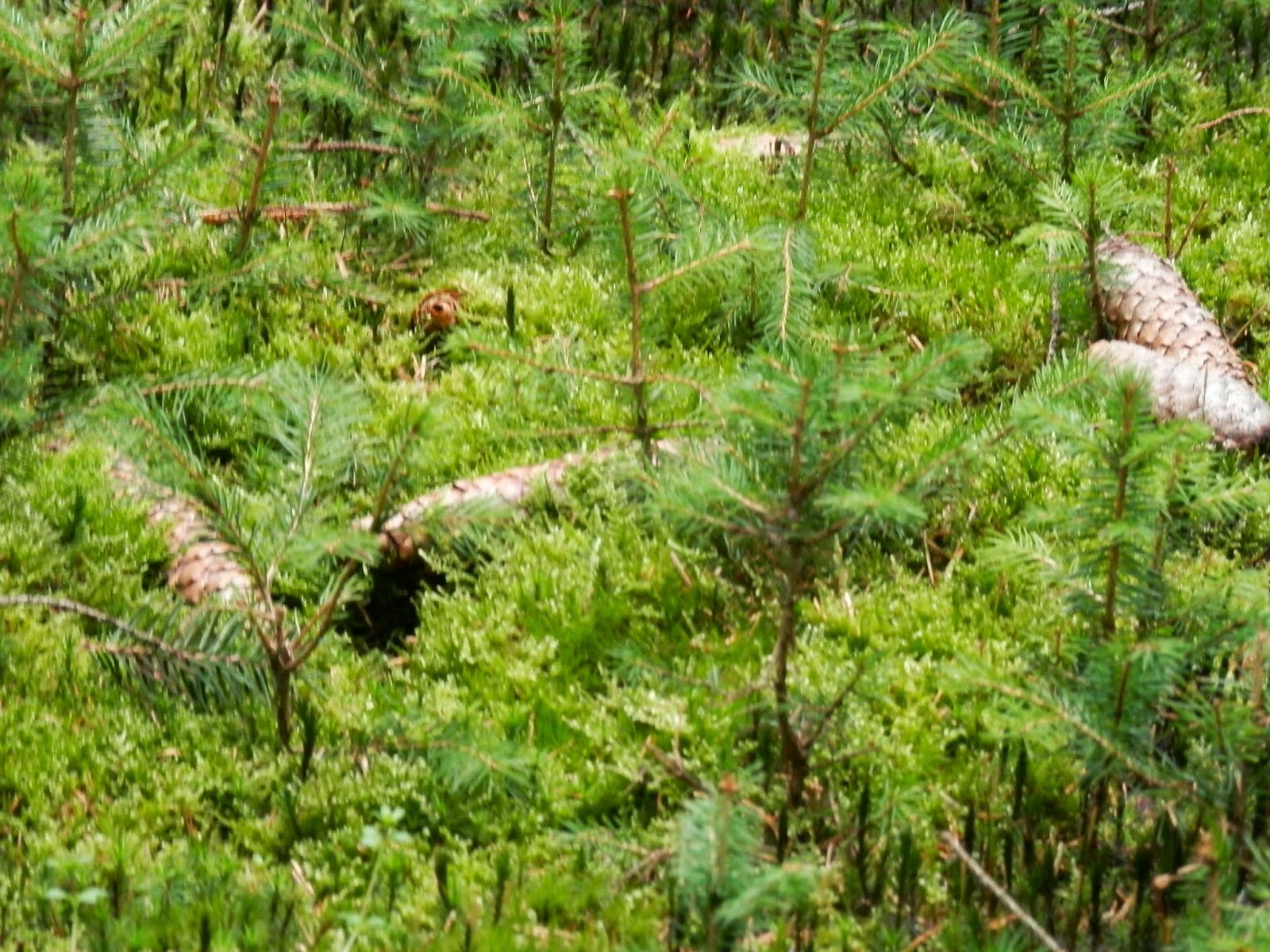 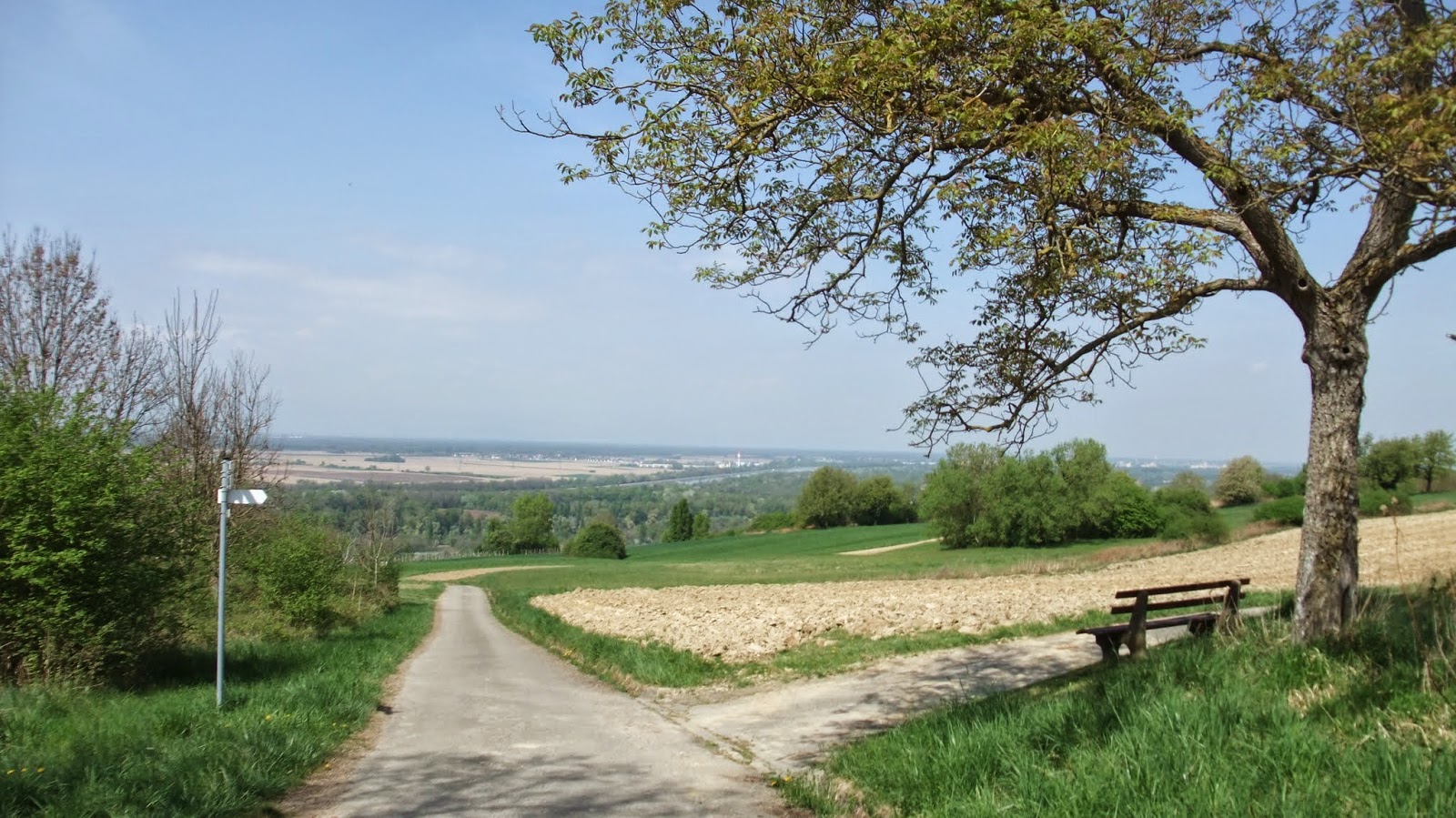 In the bar at the first campsite we stayed, they said they came to breathe the air that comes down off the mountain, in the woods itself cyclists, walkers and even a wedding party were doing the same, we even got passed by a jolly German jogger who must have been mid fifties or more ... and at quite some altitude. It’s a magical place, wilderness enough with pockets of absolutely picturesque habitation, and people who a genuinely pleased you’ve come to see their bit of our world.

The Black Forest goes on the list of places to tour just because.
Posted by ILTYT_Adventure at 09:31