We drove from Sagres one hundred and fifty miles in and up country to the Alvito area (though we think the postal area would be Baja, it’s hard to tell ... in the main because we don’t speak Portuguese, and let us say it now again: the British/English approach to learning foreign languages is appalling and we should be doing a lot better. Inland in one of the most remote and uninhabited areas we have visited, the receptionist and the cleaner come cook speak fair English, and this area is way way off the usual tourist track; we’re closer to western Spain than Portugal’s holiday coast. 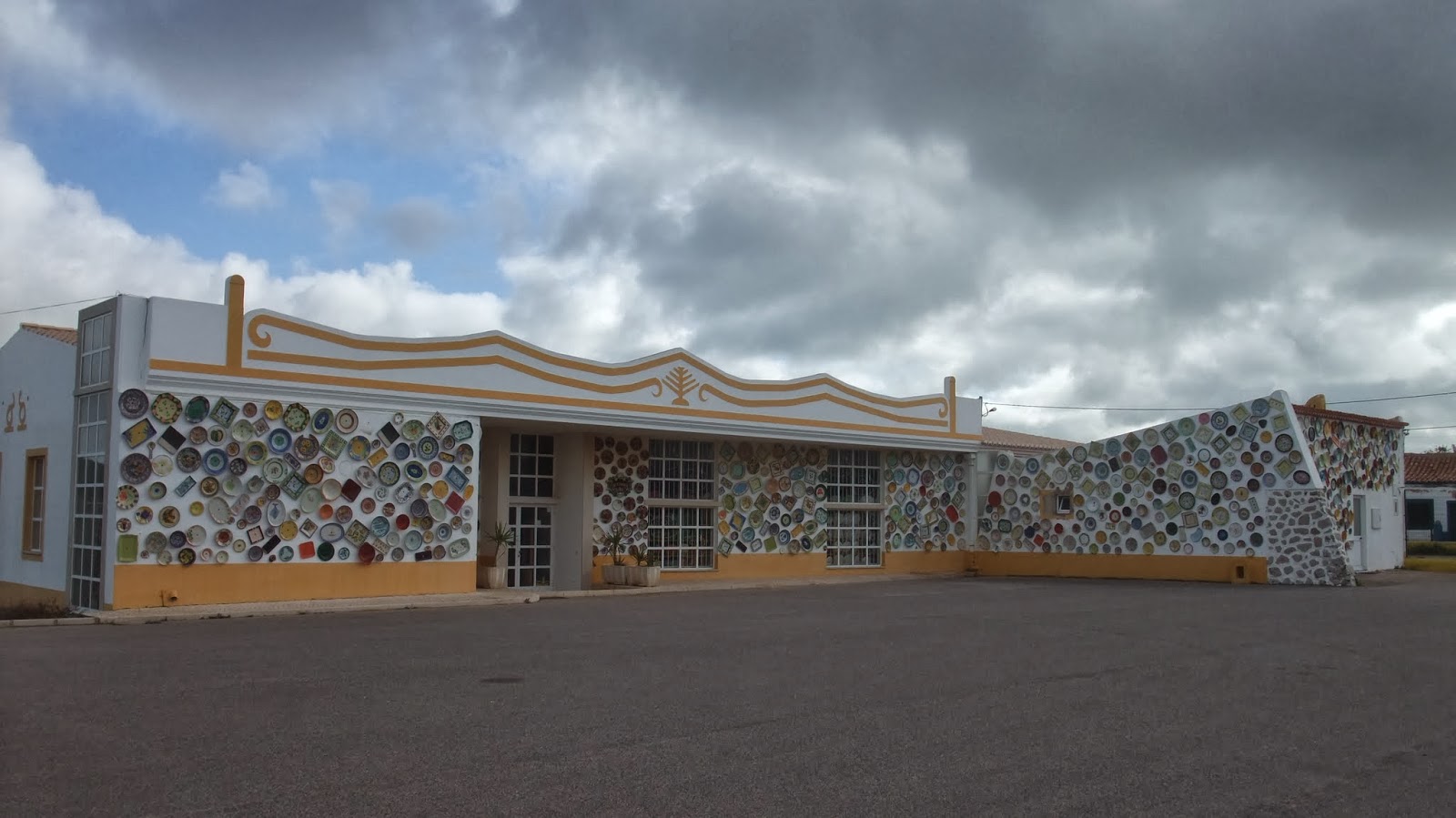 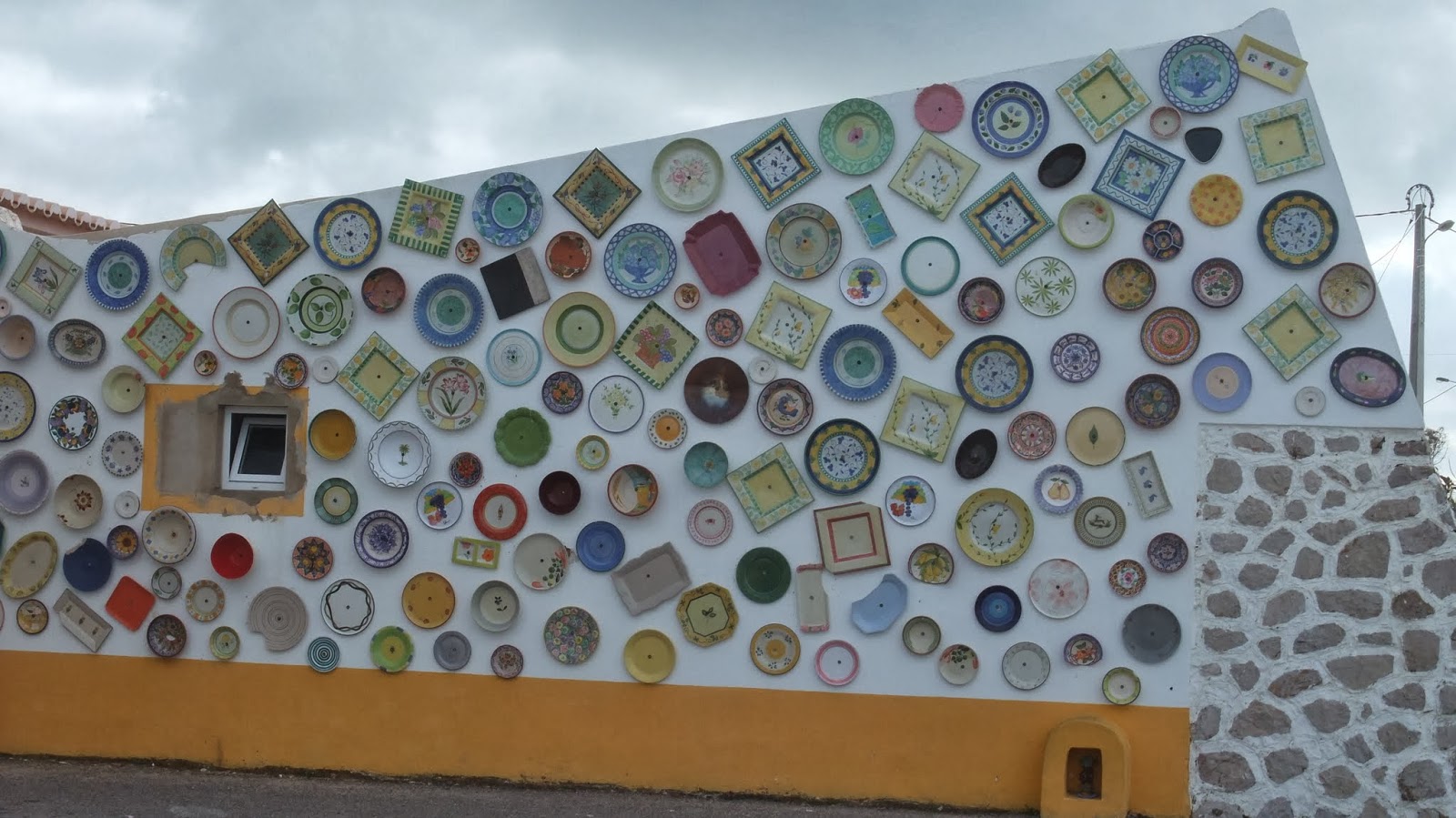 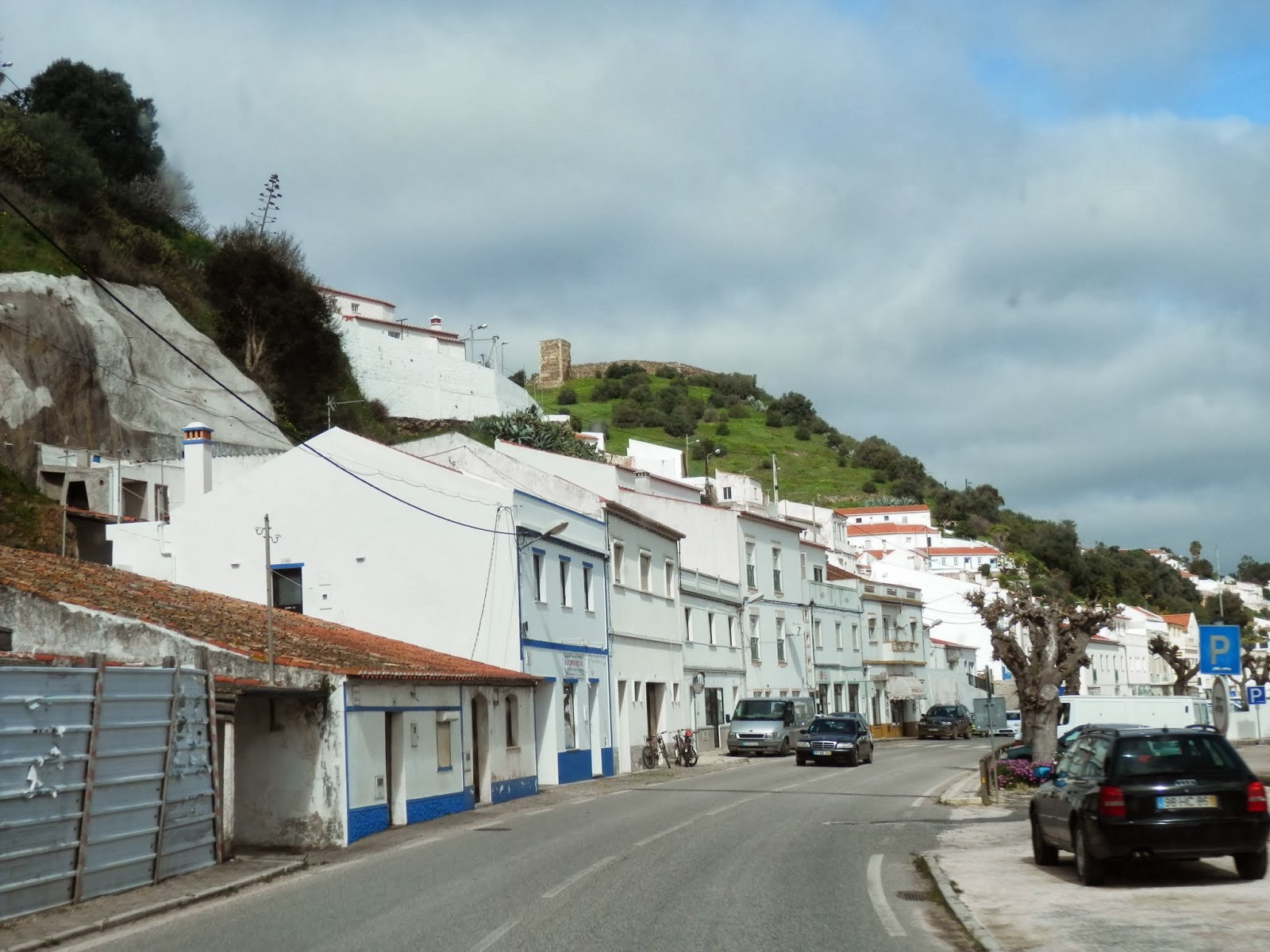 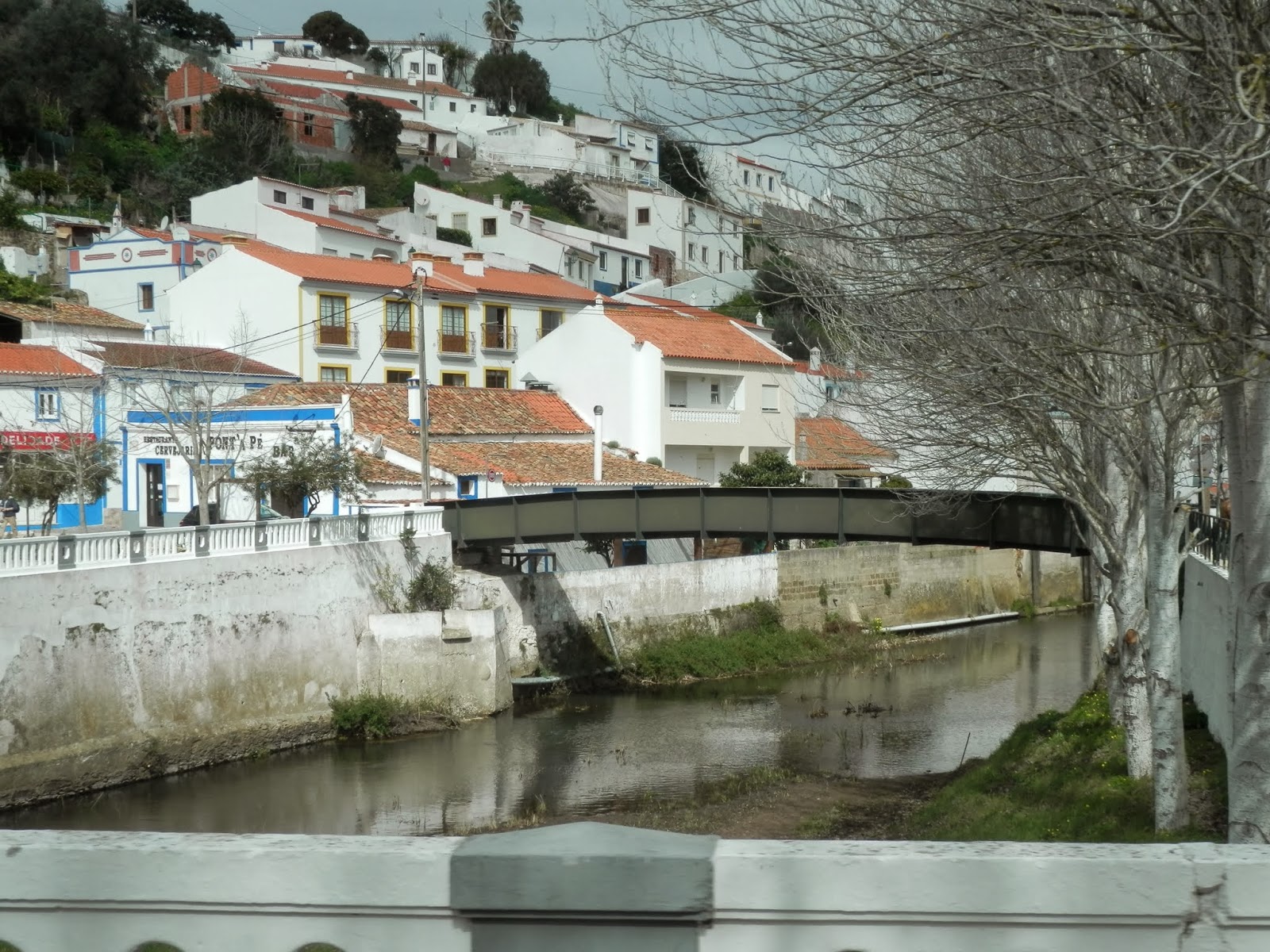 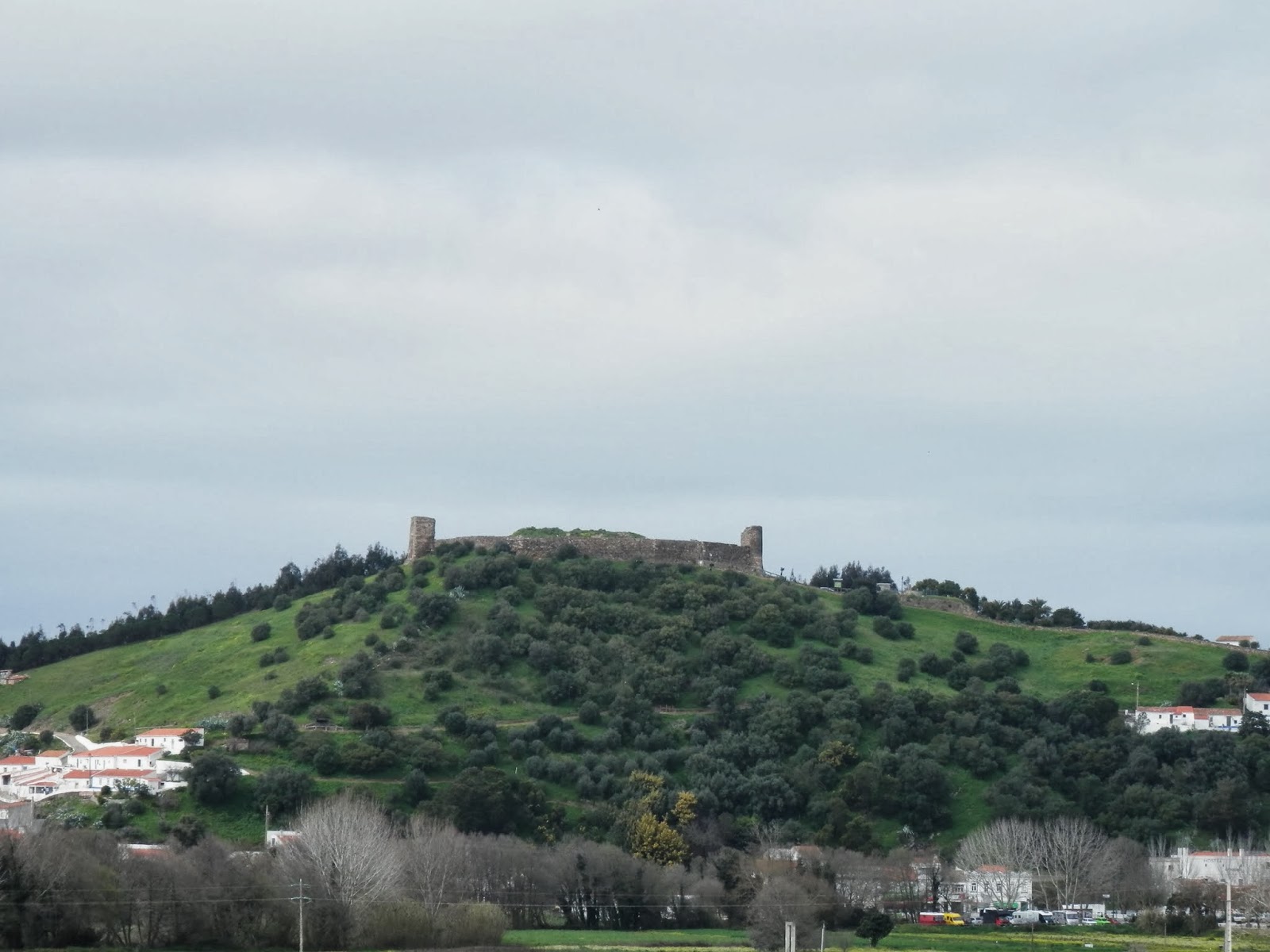 As a general rule, while we have found the holiday spots and surrounds disappointing, the one thing that has amazed and shamed us is the standard of English everywhere, even a mostly toothless old fisherman in Sagres Harbour spoke enough English to say good morning and explain a gutted Moray eel and a bucket of Octopus, as did the lady that ran the meat counter in a local supermarket ... while I moronically pointed at the meat I wanted held my hands in a cup shape to indicate portion size and oinked to indicate I wanted pork ... Oh the shame when she said `Half kilo of Pork Ok’? (to be fair this had been the international sign language of supermarkets off the beaten track in Spain, so I could forgive myself for assuming it would be the same here ... just). The Portuguese speak good English and are generally polite and friendly ...except the git in the post office in Sagres, he was a nob ... give a man a uniform and a f**&%@ing peaked cap, and you’re one step away from eugenics and concentration camps. 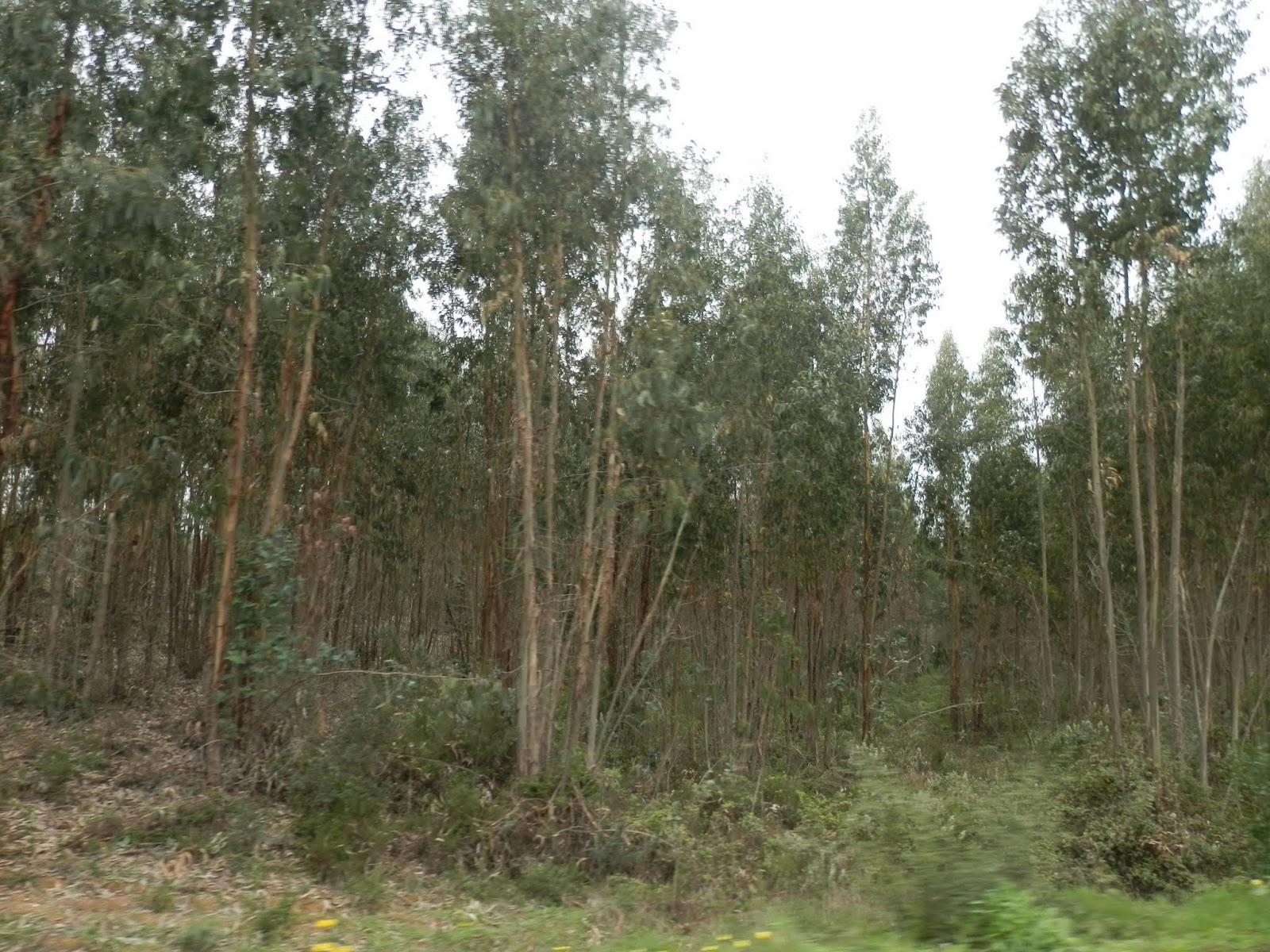 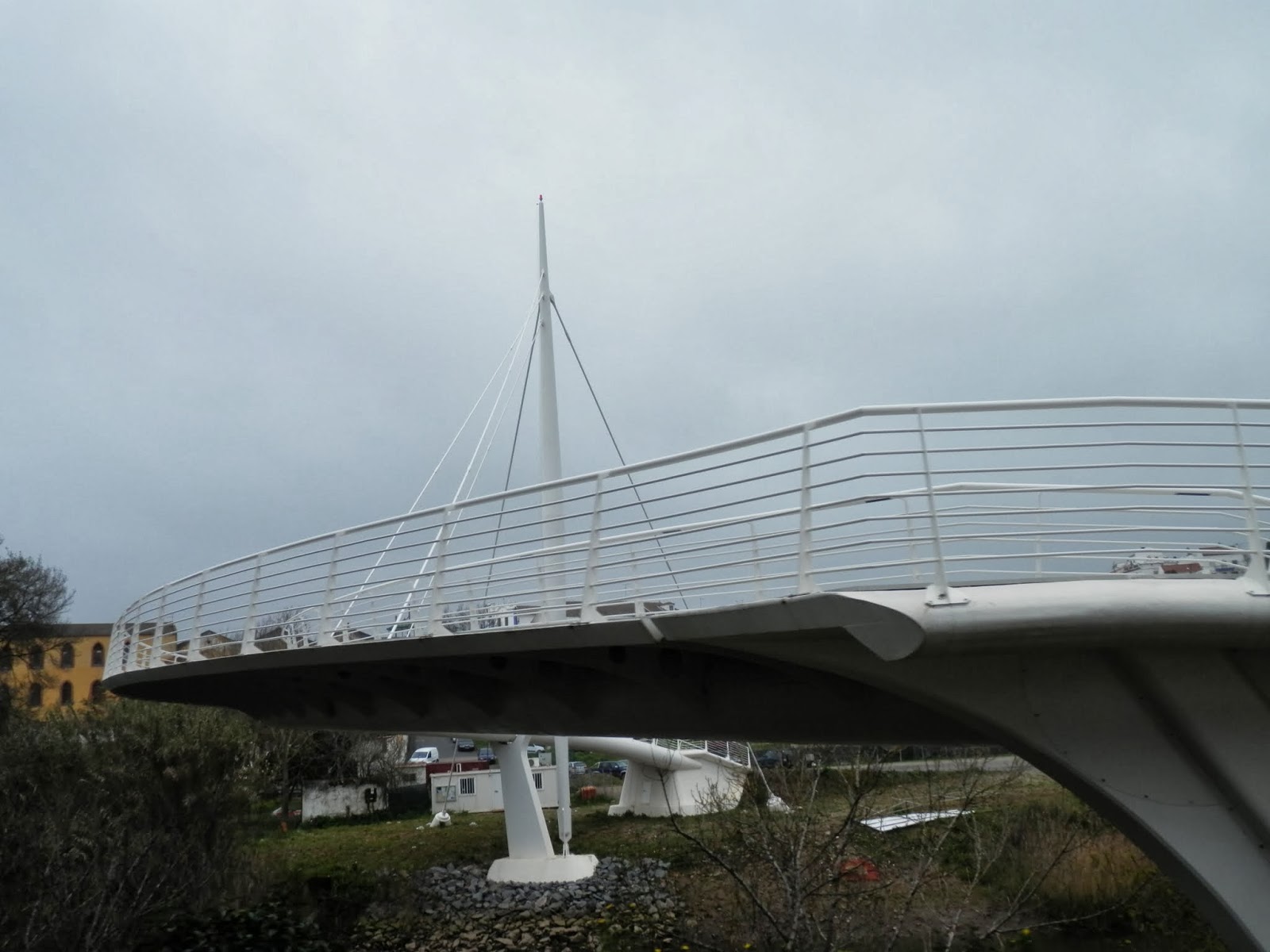 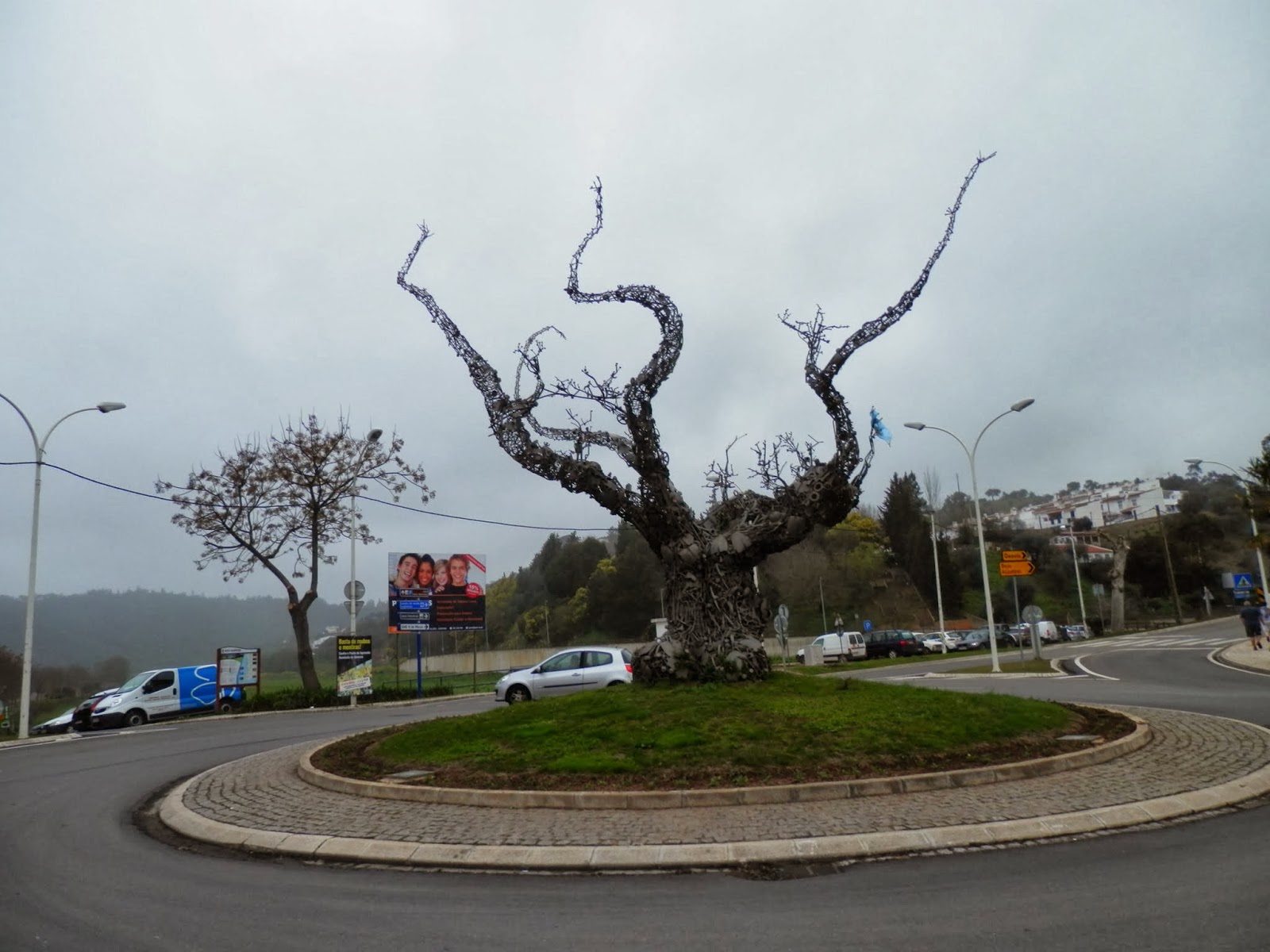 For the drive inland we avoided the toll roads and motorways, in part because you miss so much on the major roads, in part because the toll systems in Portugal need an induction course, so you know where and when you should pay, lest you run foul of the law because you didn’t. And finally because the tolls are expensive relative to the quality of road ... one other thing that proves the Portuguese tolls system is a balls up is the fact that quite often the split times to arrival at destination can be measured in very small amounts of minutes; if we’re paying for a road it has to be significantly quicker and flatter. 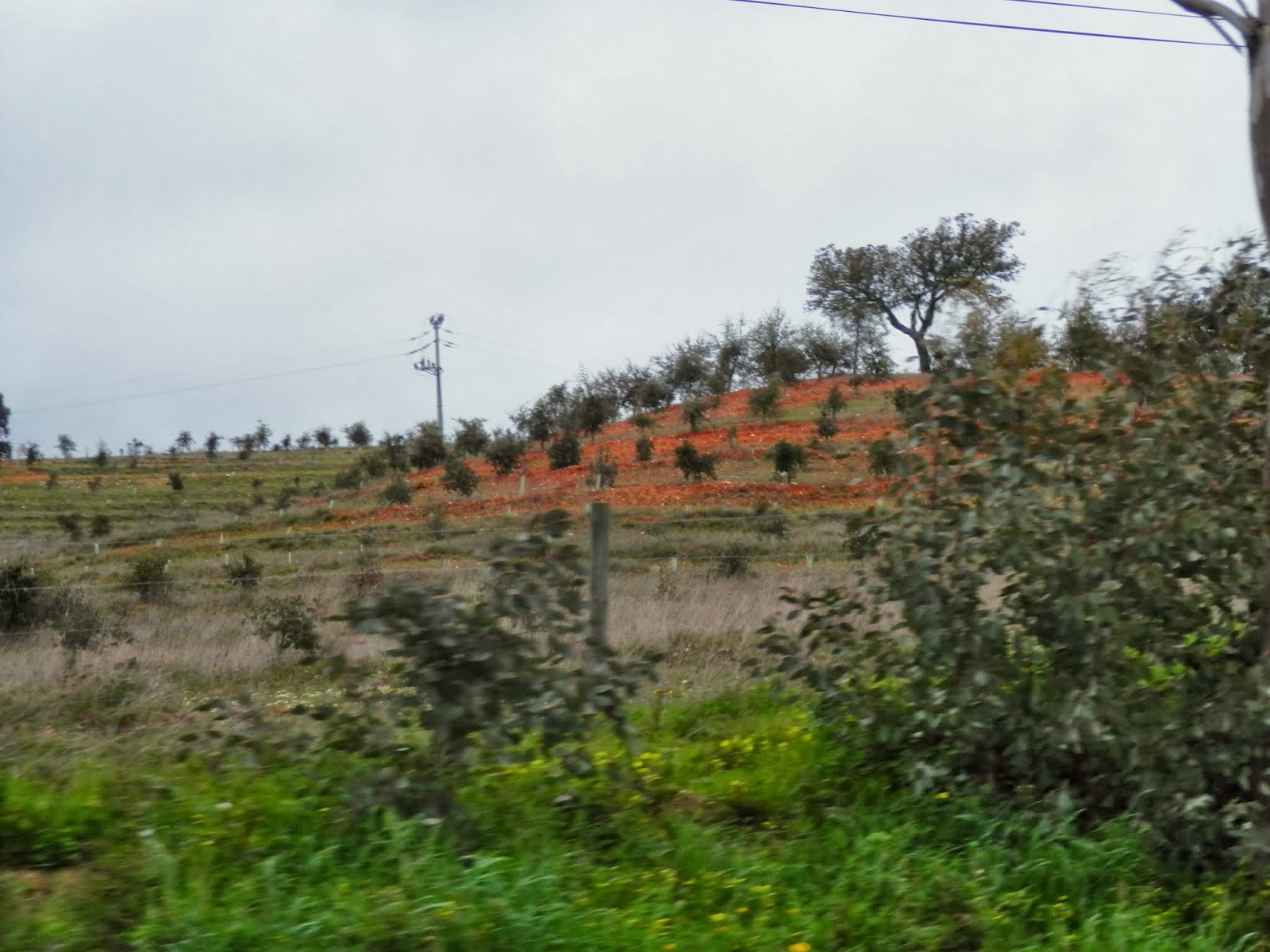 The big question though is: Did we find the heart and soul of Portugal, and was it with a whispered wow? No and yes. We found that inland a way in Portugal there are miles of Eucalyptus trees either as verge trees (land stabilisers maybe), plantations for sure. We found hundreds of Cork Oaks (Quercus suber), some stripped, some not and sheets of cork like giant half round roof tiles piled like logs maturing in the open air. We found ancient olive groves gnarly and open, with sheep and pigs roaming free beneath. We saw new olive groves, neat with small stock, still wearing their stabilisers and bark protectors, and middle aged olive groves across great swathes of rolling hills, of pale grass and calcareous soil with dark green piping of trees, giving those rounded hills a geometry that looked ... not quite unnatural ... graceful smooth rounded, like soft music sweeping and circling ... very engaging, very distracting (which is a bugger when the roadside gully is uncurbed and a foot or more deep ... or unfenced and twenty to thirty metres deep). 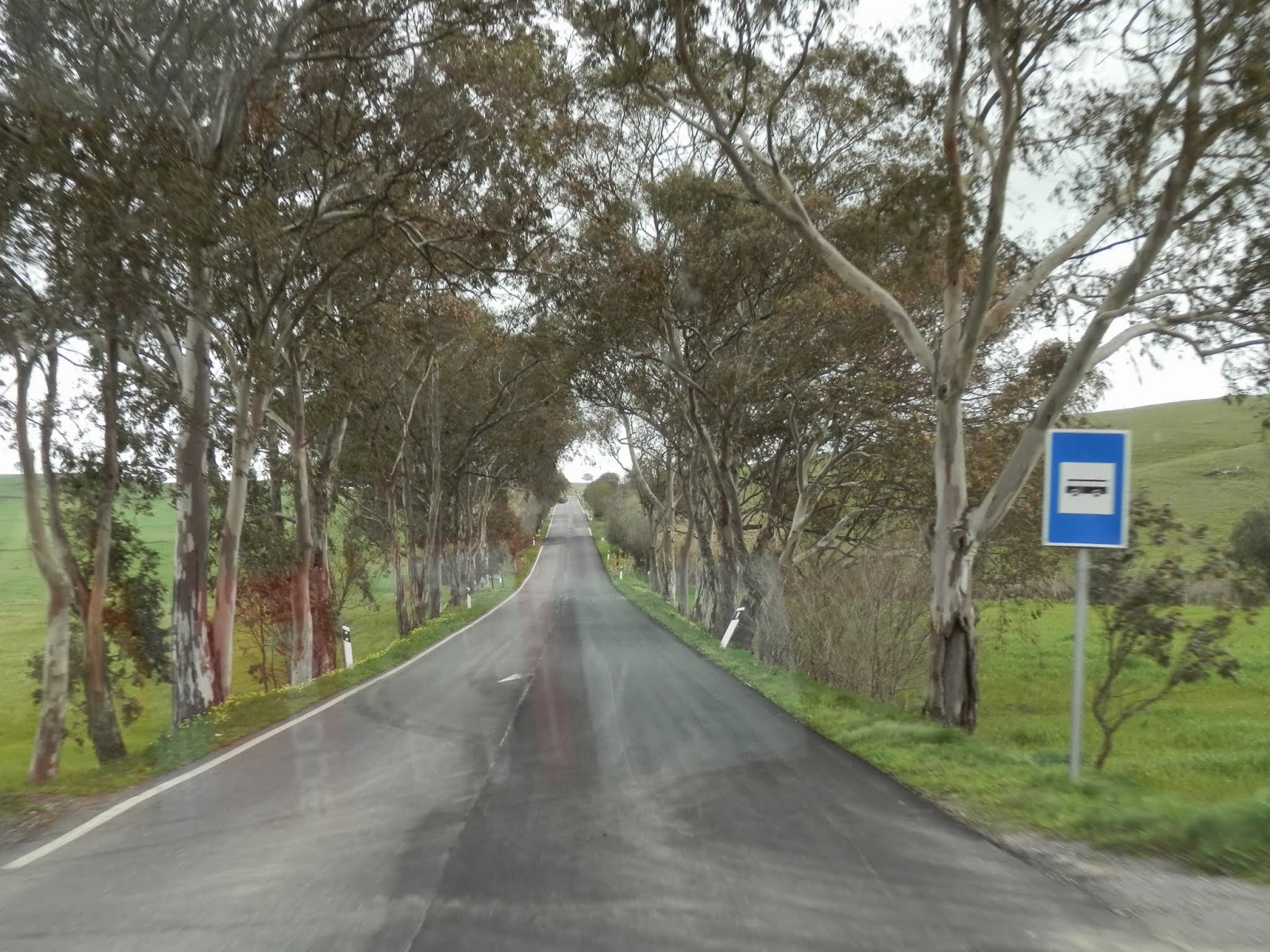 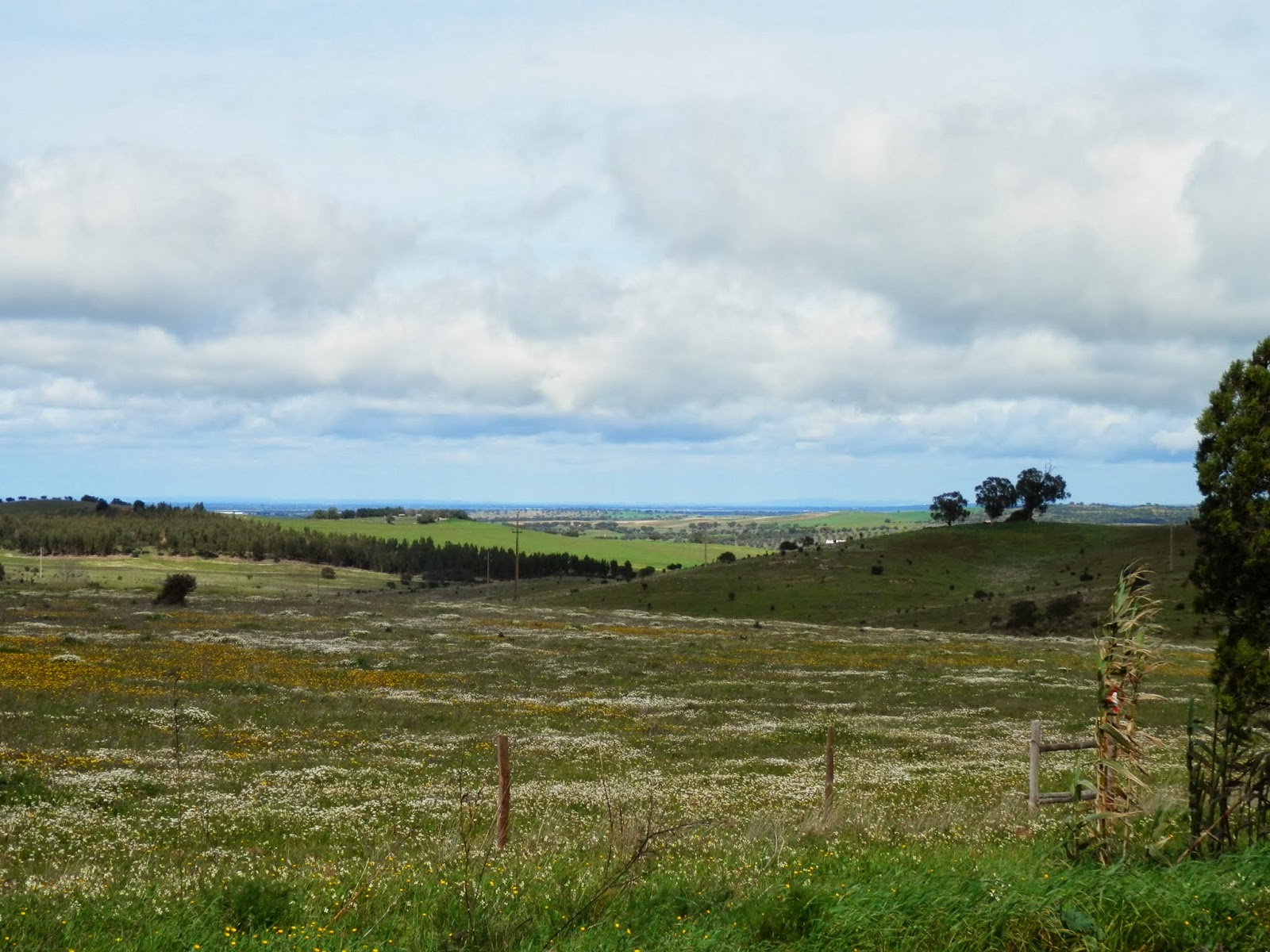 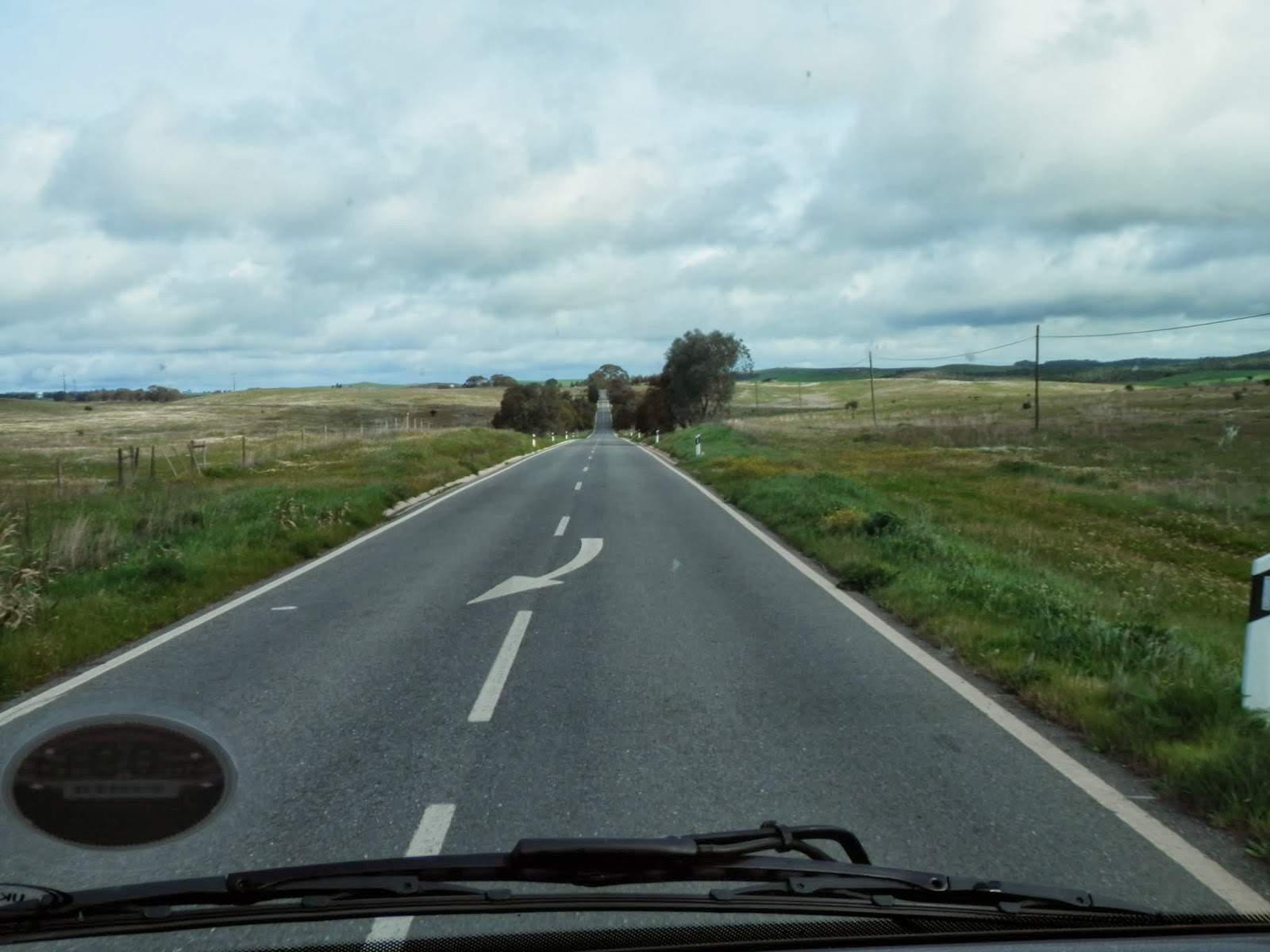 We found rolling hills and open land dotted with cattle, or pocked with rocks, and browsed by goats or rough tough looking multicoloured sheep. We found streams and small rivers here and there that had cut the rocks deeply leaving sheer cliffs only a few metres high, necessitating sudden twists and turns in the road; to take you up or down and around ... and to ensure the road ran level (in Spain they tend to just throw a bridge or cut a tunnel through and across these `wobbly’ bits); I think I prefer the Portuguese method even if it takes the wind out of Moho’s sails, and provides some heart stopping turns; not high, not even too far to fall just tight with what we would call `extreme adverse camber’. Clearly you eventually find a bridge, but they’re small, neat almost delicate, painted in reds and yellows. The only exuberant bridge was a foot bridge, cable stay type in a tiny town Odemira where we had a 10% climb away from a set of traffic lights immediately followed by a drive up a road a cart wide, and arms length from people’s front doors. Moho wasn’t happy about the 10% and said I need to stop filling up the water tank, toilet water tank, and fuel tank before I set out on long journeys because it makes his wheels ache ... Amanda said I need to stop talking to the van, and that maybe I shouldn’t be allowed near anything hot or sharp anymore ... she didn’t say that when I spoke to our cats. 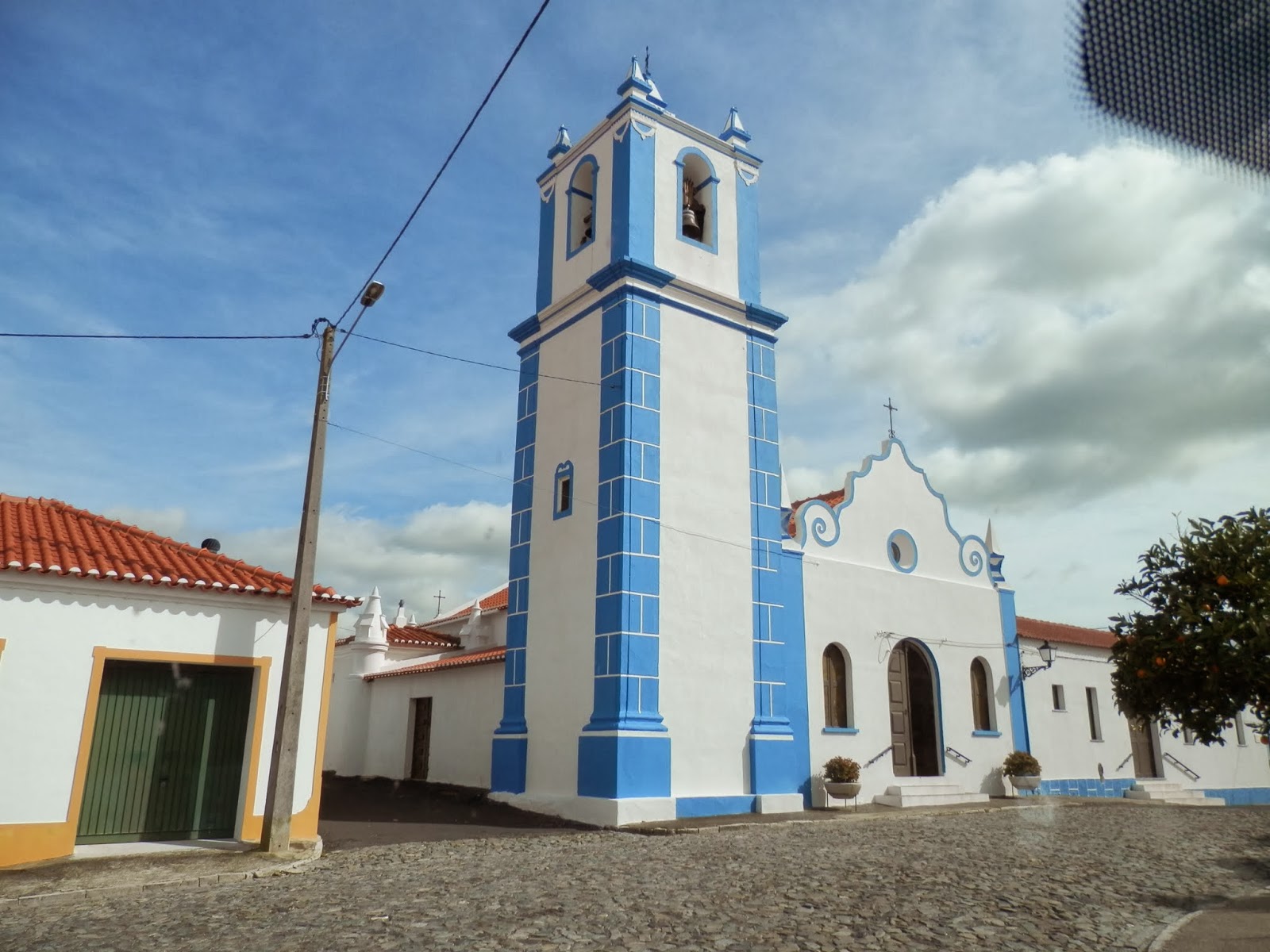 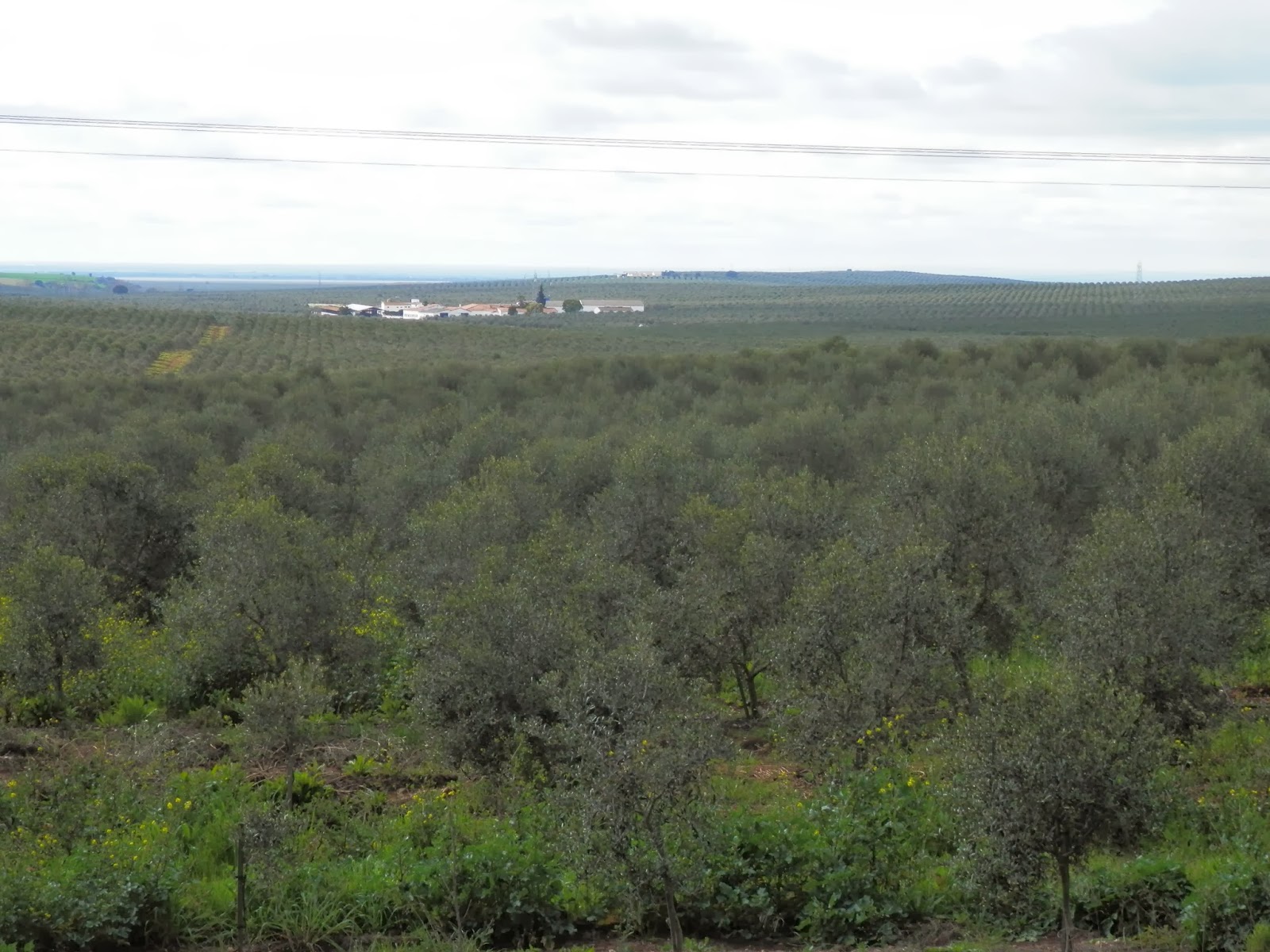 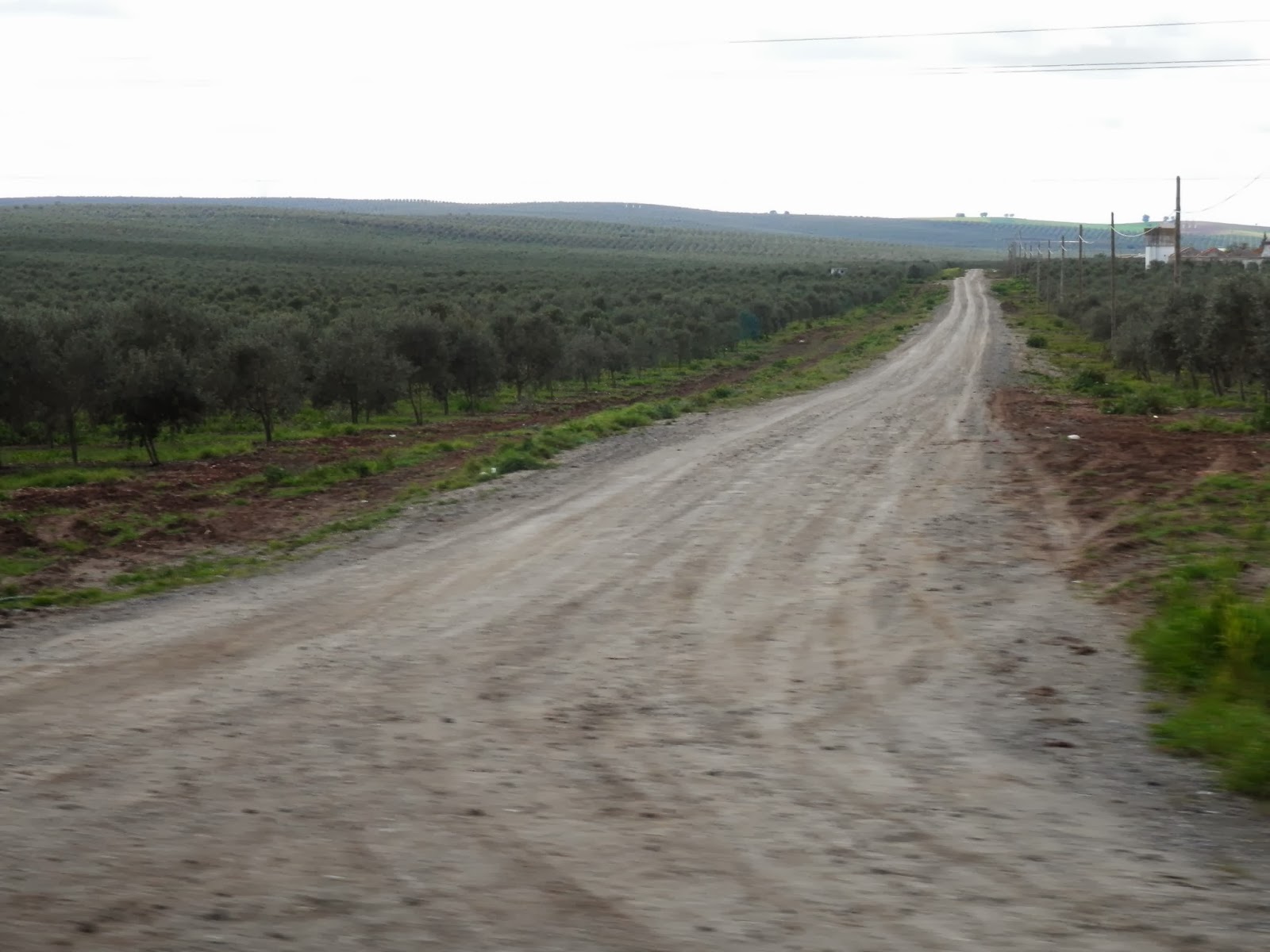 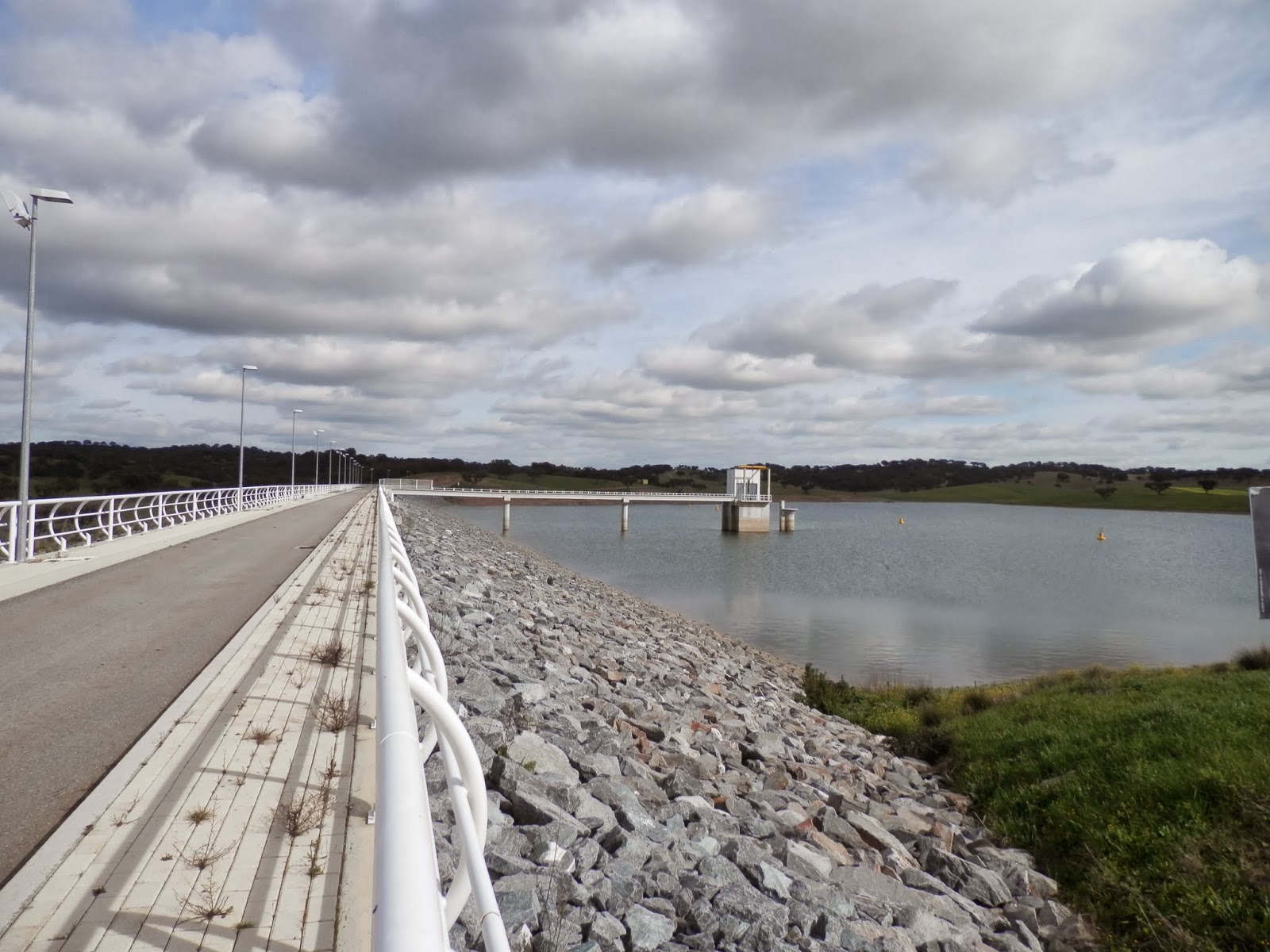 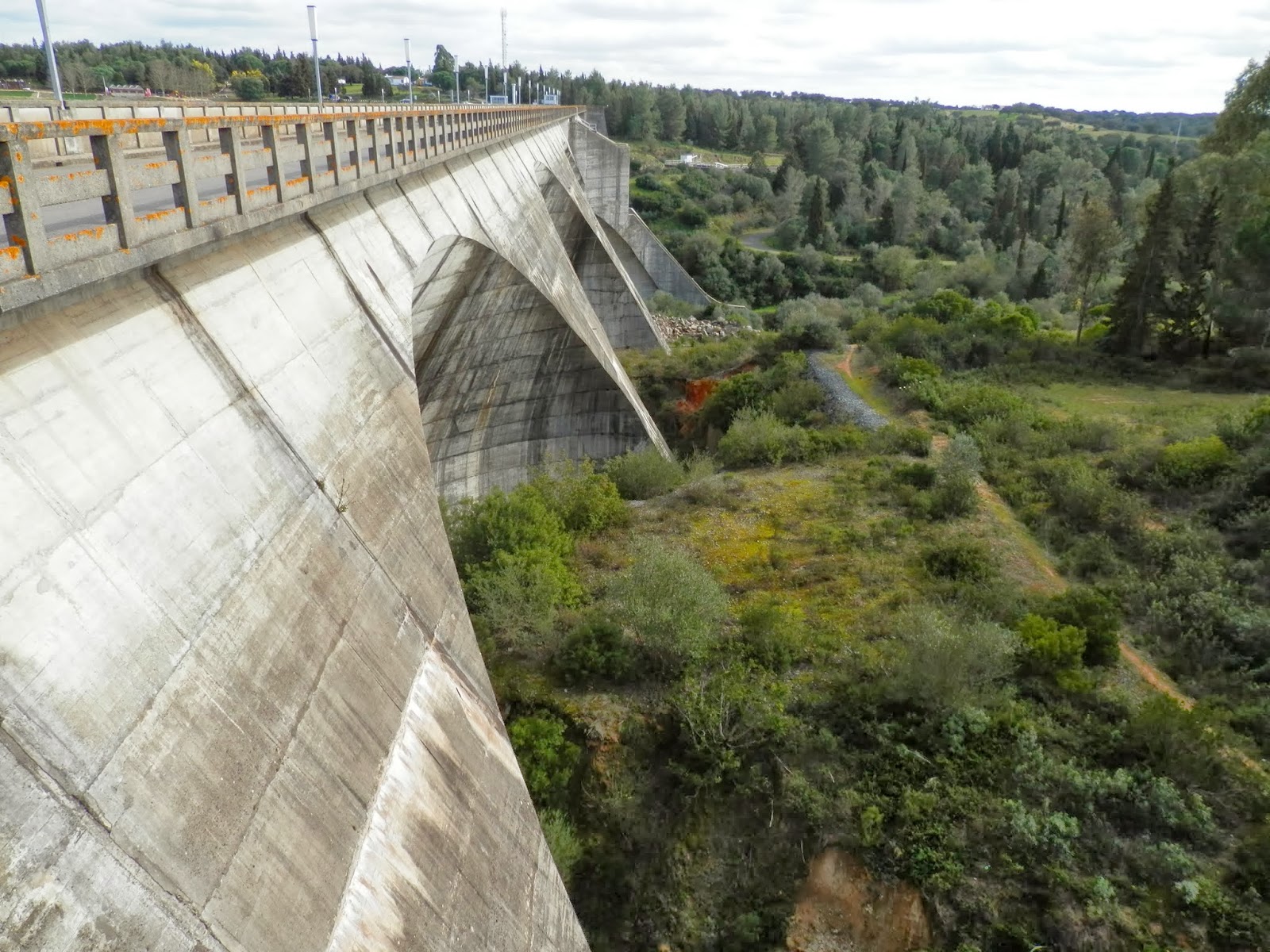 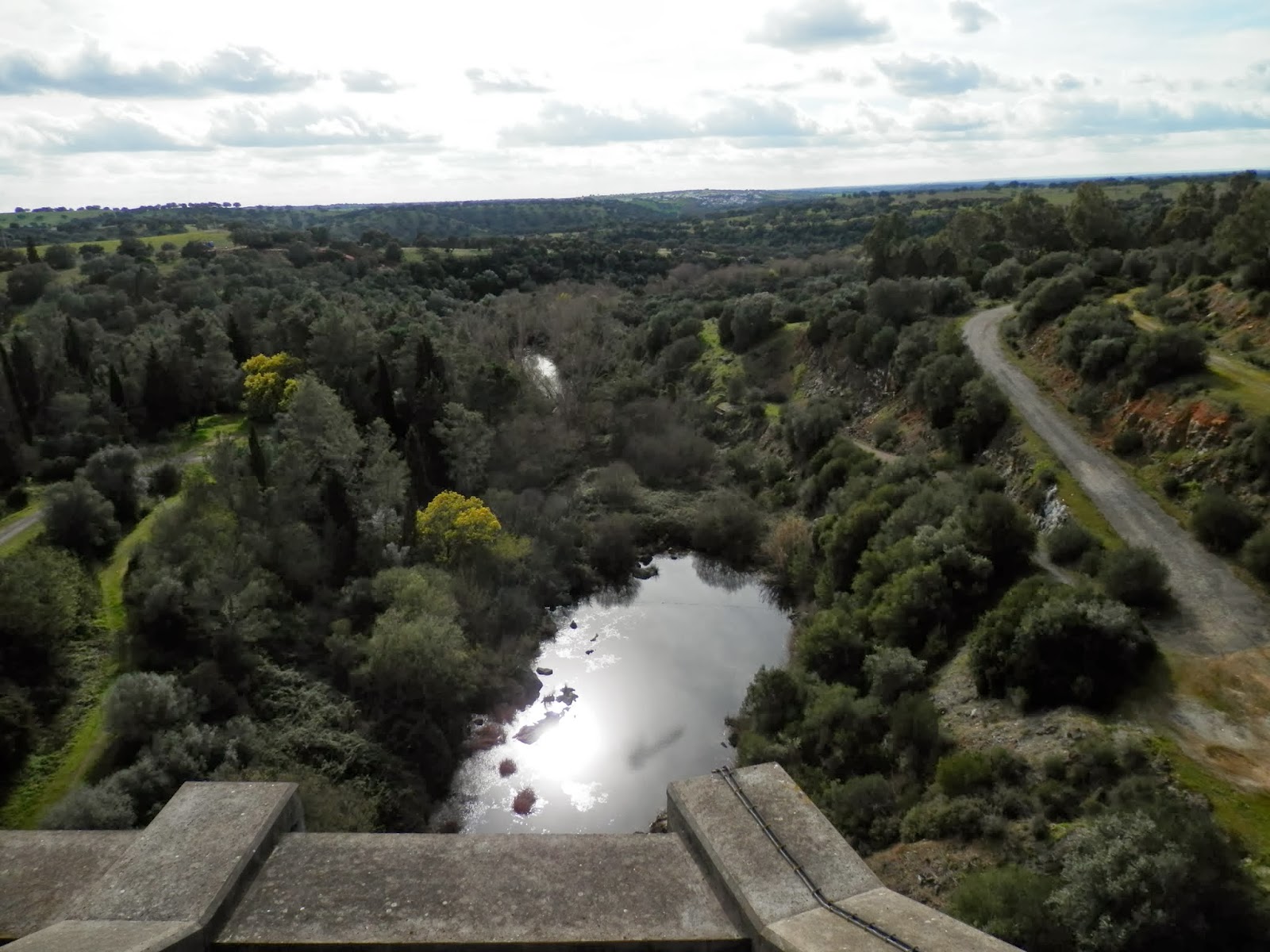 We saw iron red soil ploughed and ready for seed. The sort of red that makes you mouth water, and in other places we saw the rich dark green of cereal crops heading skywards from that same rich red earth. And bees, we’ve seen lots and lots of bees, I refer to earlier posts, that if there is something wrong with bees in Britain, it’s got everything to do with something we are doing or have done. Hedgerows HUMM here, get out your vehicle for just a few seconds and tune your ear and there it is ... do ensure when tuning your ear that you aren’t near wind turbines; at a distance they sound just like bees a buzzing, key thing to note is that the wind turbines don’t stop start, stop start.
We saw fields of wild yellow Lupins, daisys and all manner of early spring wild flowers in carpets, clumps and drifts. There were pockets of industry, high rough pasture, low dams of concrete and interlocked rocks between shallow valleys, and here and there people who seem compelled to nod acknowledgement to the odd couple in the big yellow van with the rarely seen British number plate. 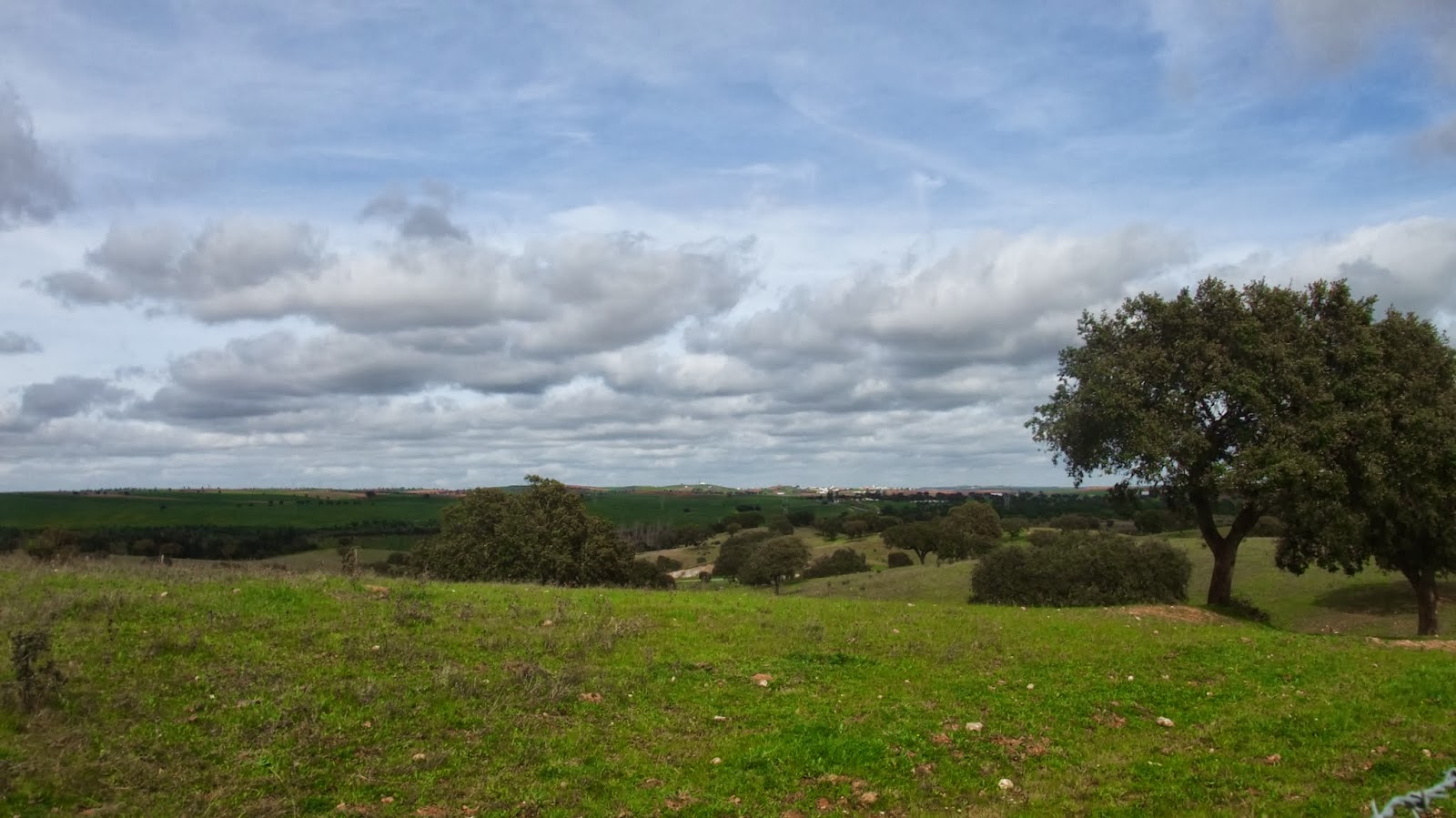 We finally arrived at Alvito around 4pm after three and a bit stop start hours of driving, along what felt like one long straight road with a few wibbles along the way (wibbles not wobbles). We actually drove on three separate roads that intersect each other seamlessly. This was just a lucky quirk for our particular destination if you look at the map, which Amanda discovered was truer than the Satnavs circuitous route to what it has had programmed as a primary non-toll route (or as we call them idiot proof straight lines). 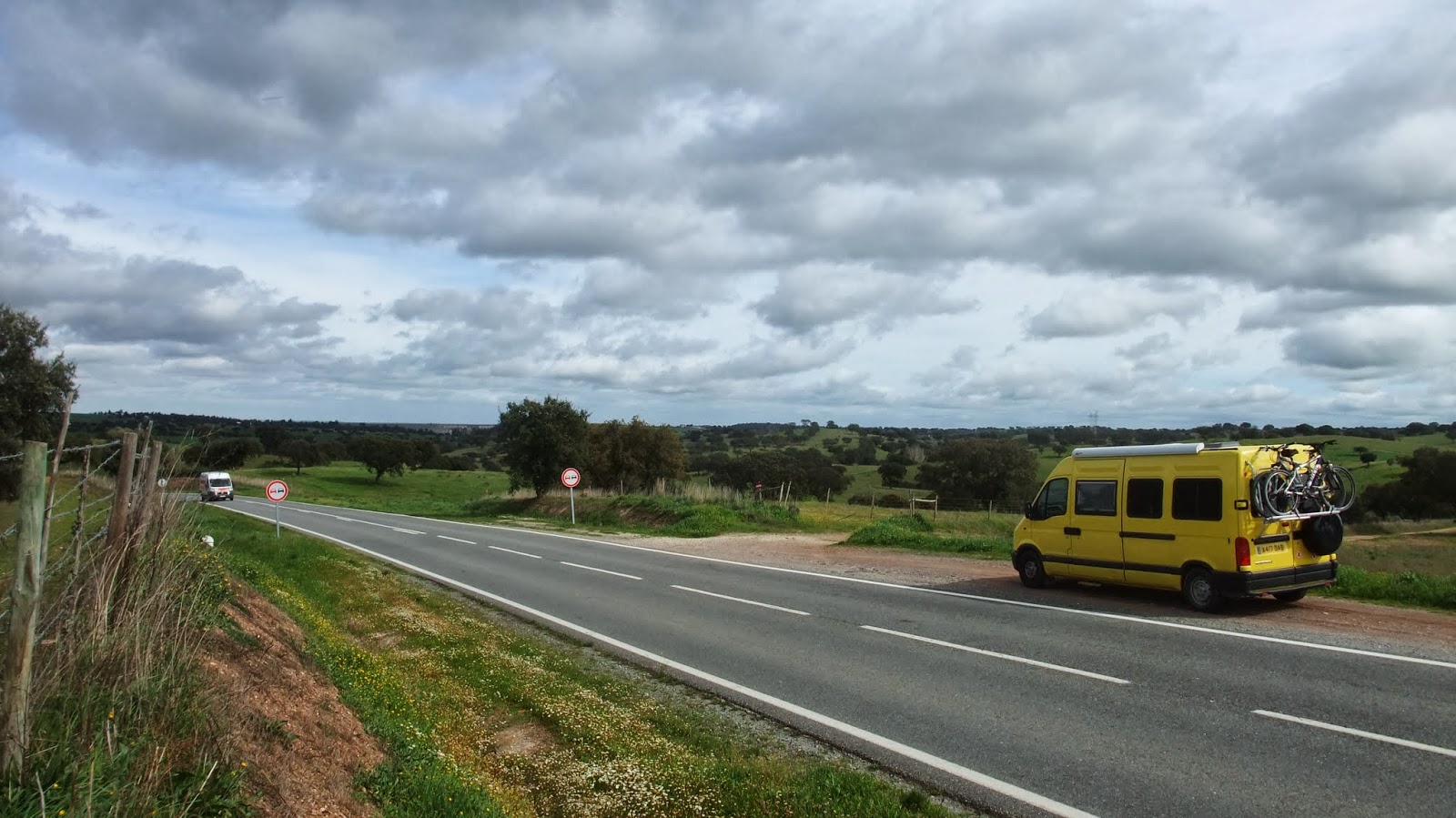