The Road to Granada and Back.

Today we almost killed Moho. We are very sorry we won’t do it again ... mostly because it’s a long way home on the back of a lorry if we shred the engine. The issue is overheating, or more correctly getting to the point where steam is going to start issuing and or lumps of shrapnel will be pocking Spanish roads. I’m not sure the whether the cooling fans are kicking in properly if at all.

The road to Granada from the coast just east of Carchuna is spectacular with a capital S. Most of the spectacular is due to the way the Spanish road builders have bridged between the various peaks to maintain the road at an average of 6% incline (or there about). Amanda has tried to take pictures, but they are all in motion so the quality and alignment may not be up to our usual high standard, ahem. 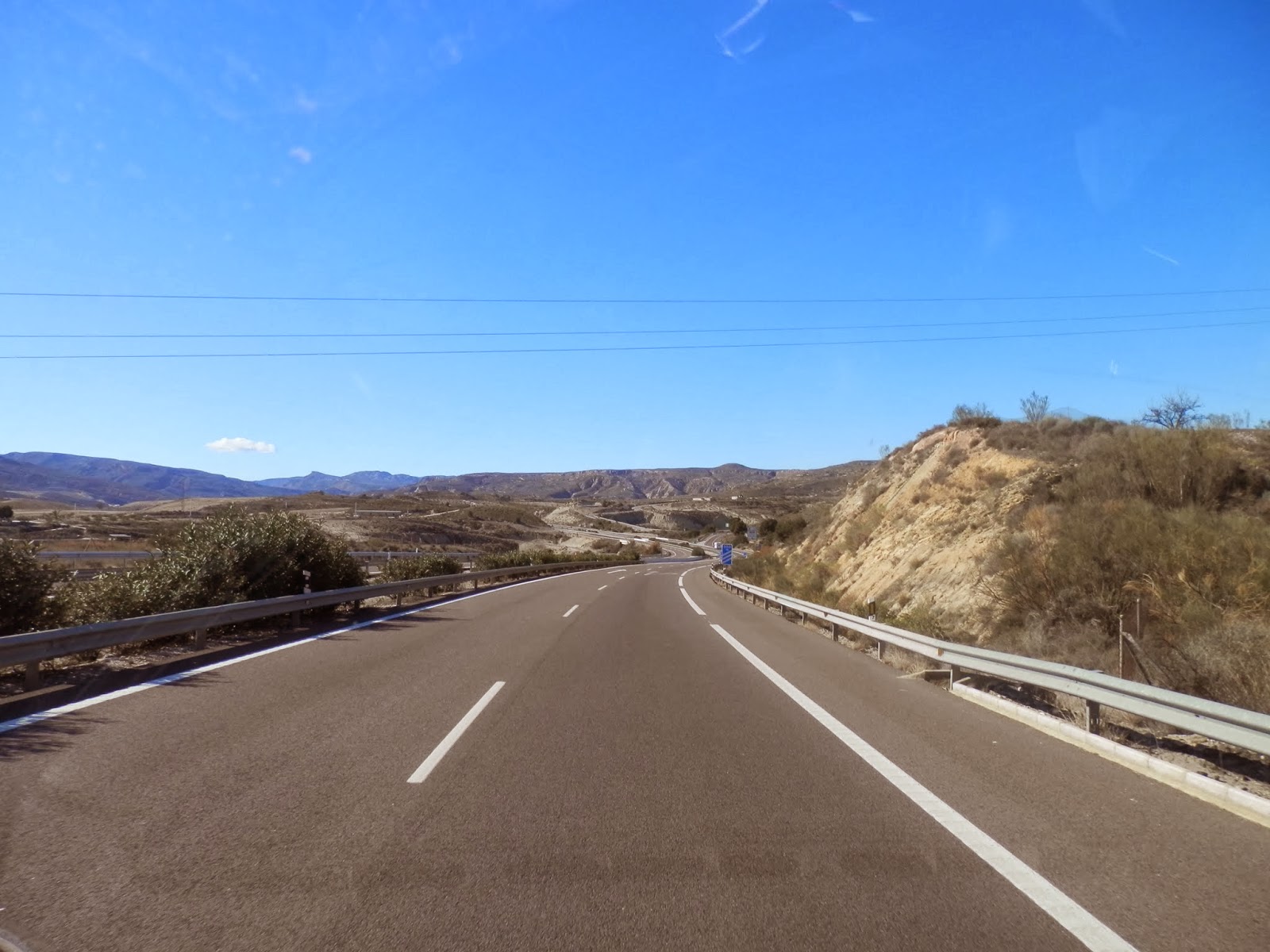 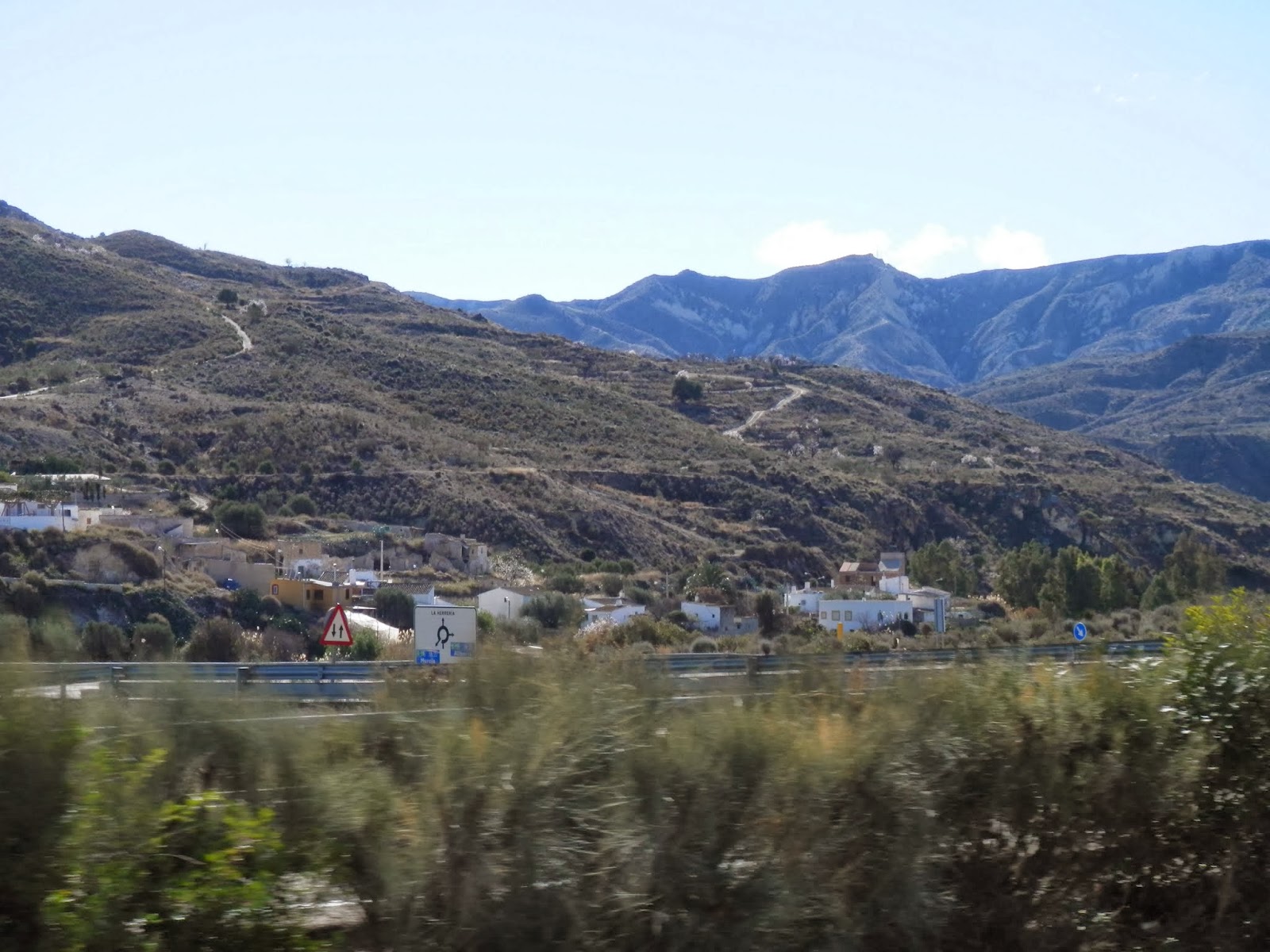 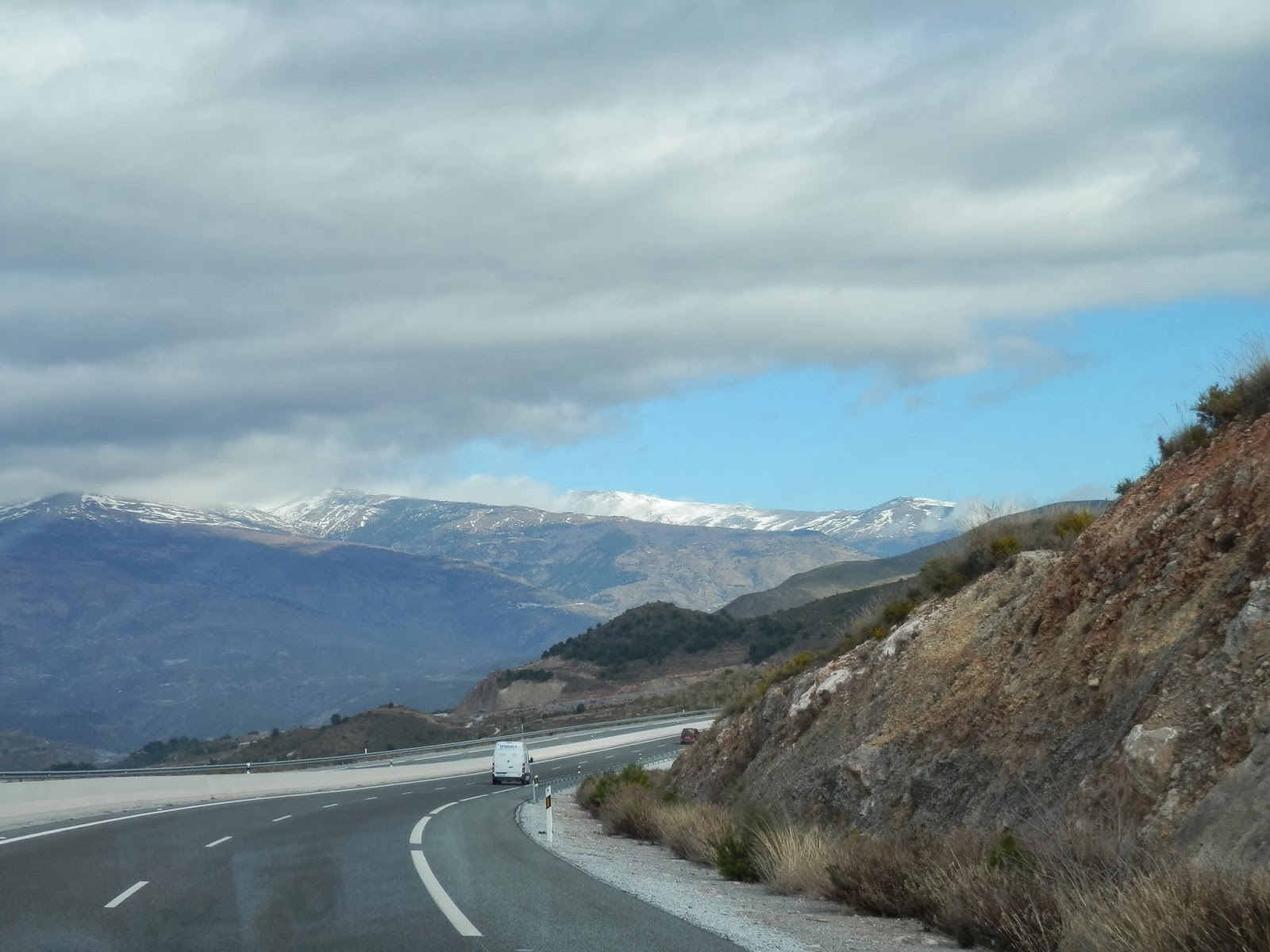 There are no short cuts to Granada, the old road parallels the new, which in places is still either being constructed or widened in situ (the old road where it’s being replaced was clever and spectacular in its own right, and in places a shed load steeper with lots of switchbacks). There is a section over a reservoir that could have been a set from a computer game I once possessed called Ryven or Riven (I can’t remember). The road just skirts the cliffs, leaping the shortest hops between the mounts and mountains. It’s brilliant because it relies very little on tunnelling, which is slow and expensive. Instead they have been hauling in bridge sections and then by some magic we couldn’t observe `flying’ them across the gaps. 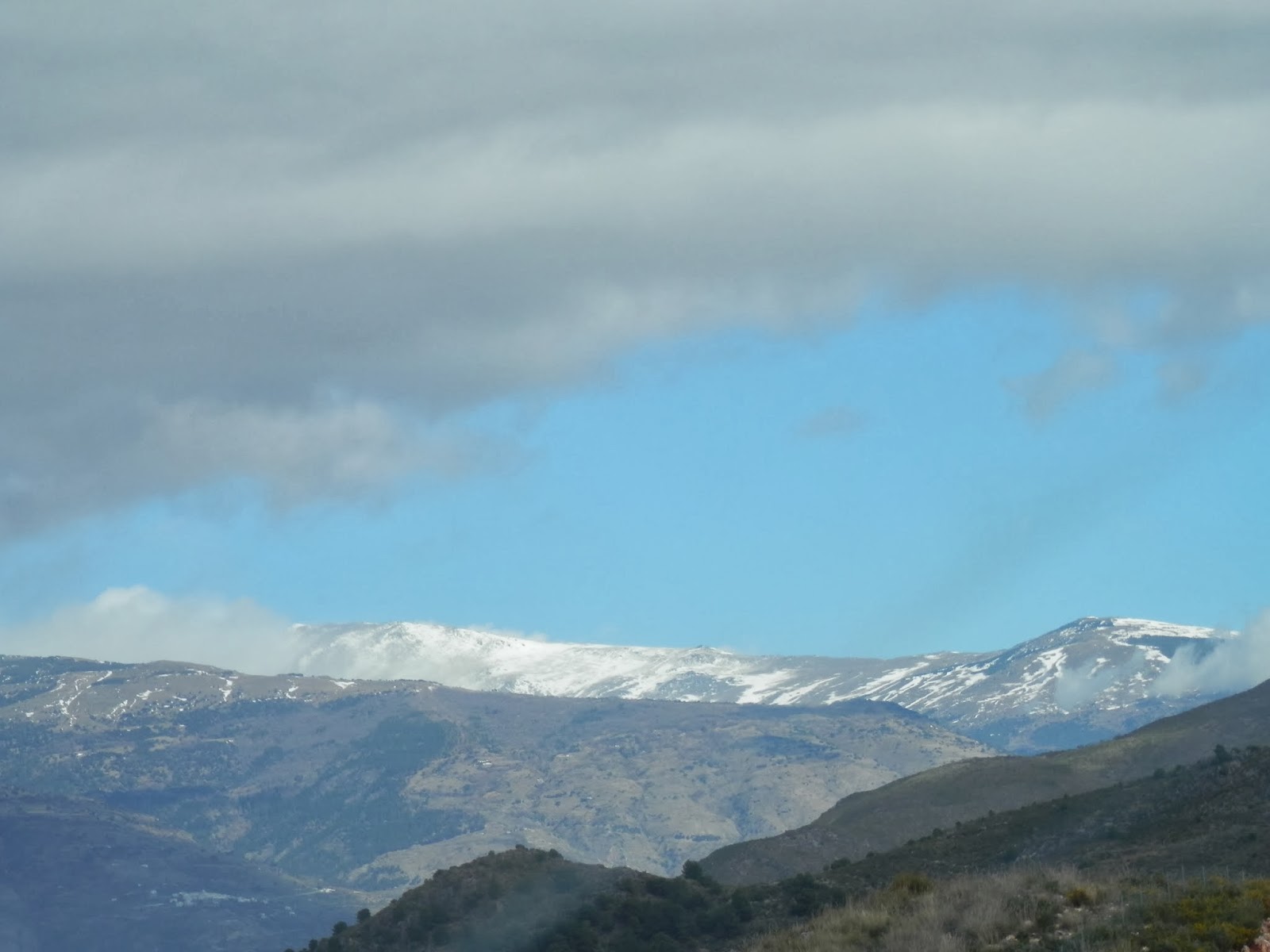 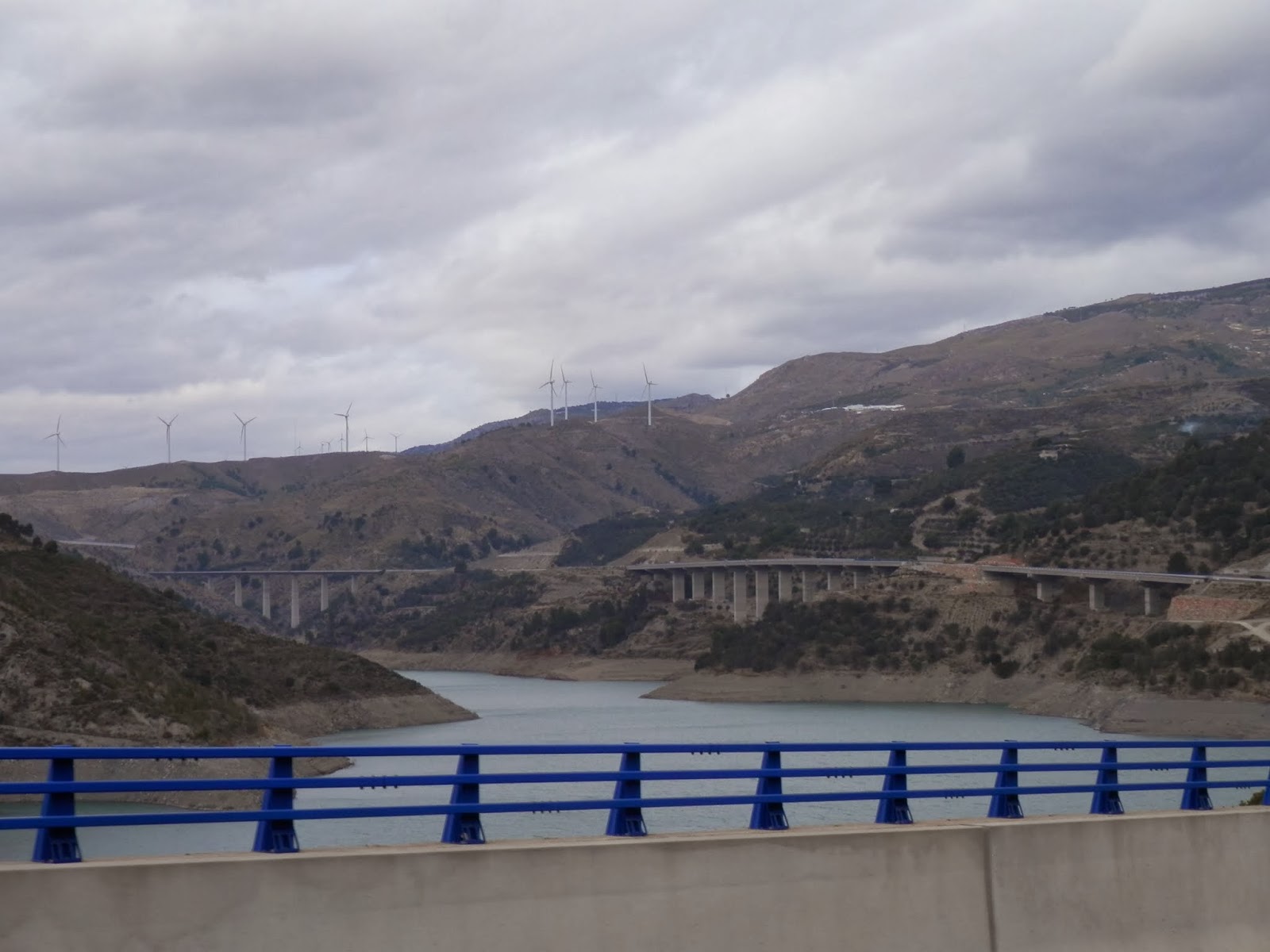 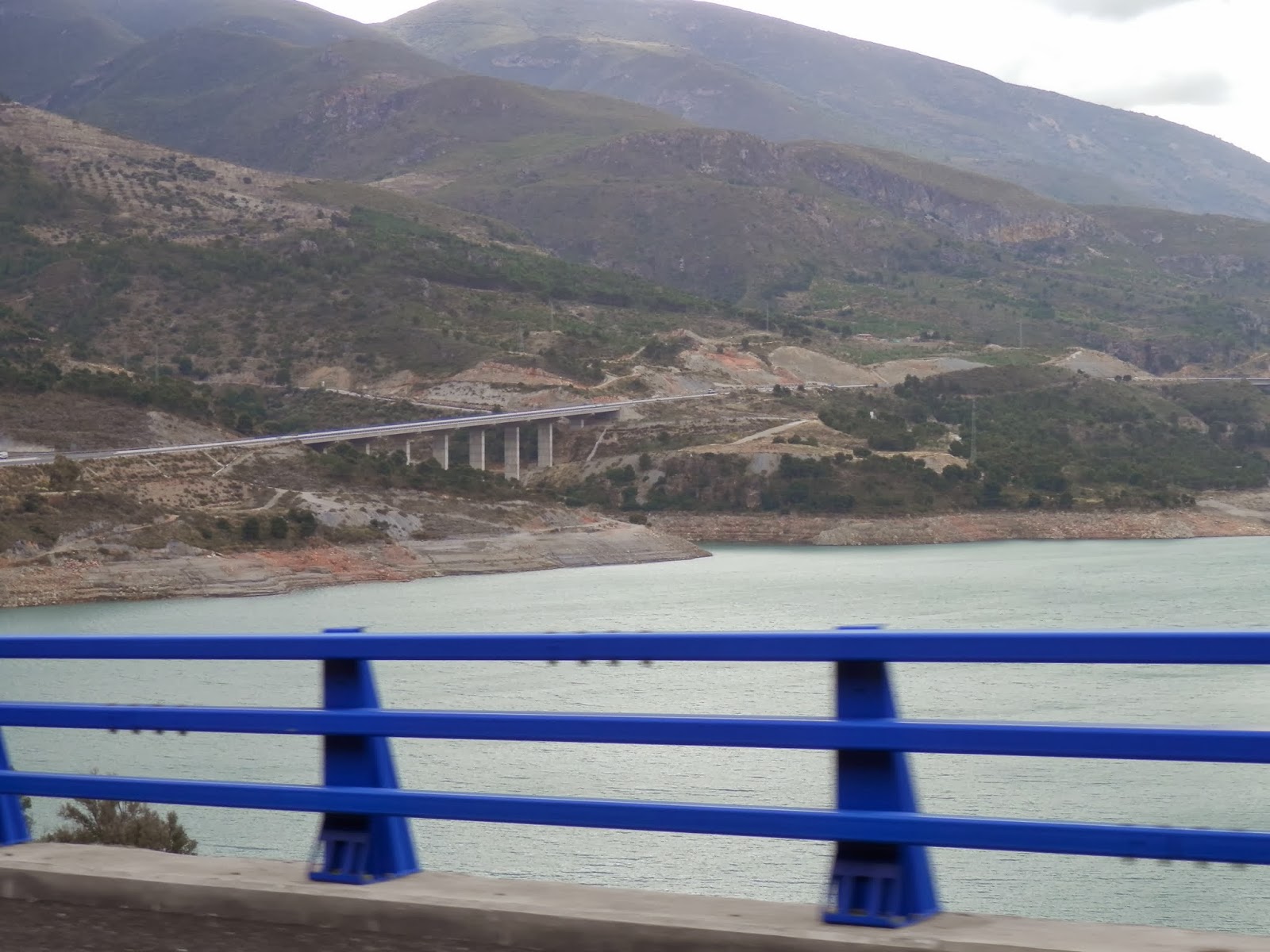 Addendum: We saw it on the way down, picture included.

As ever we’ll let the pictures fill in the gaps in my ability to describe. 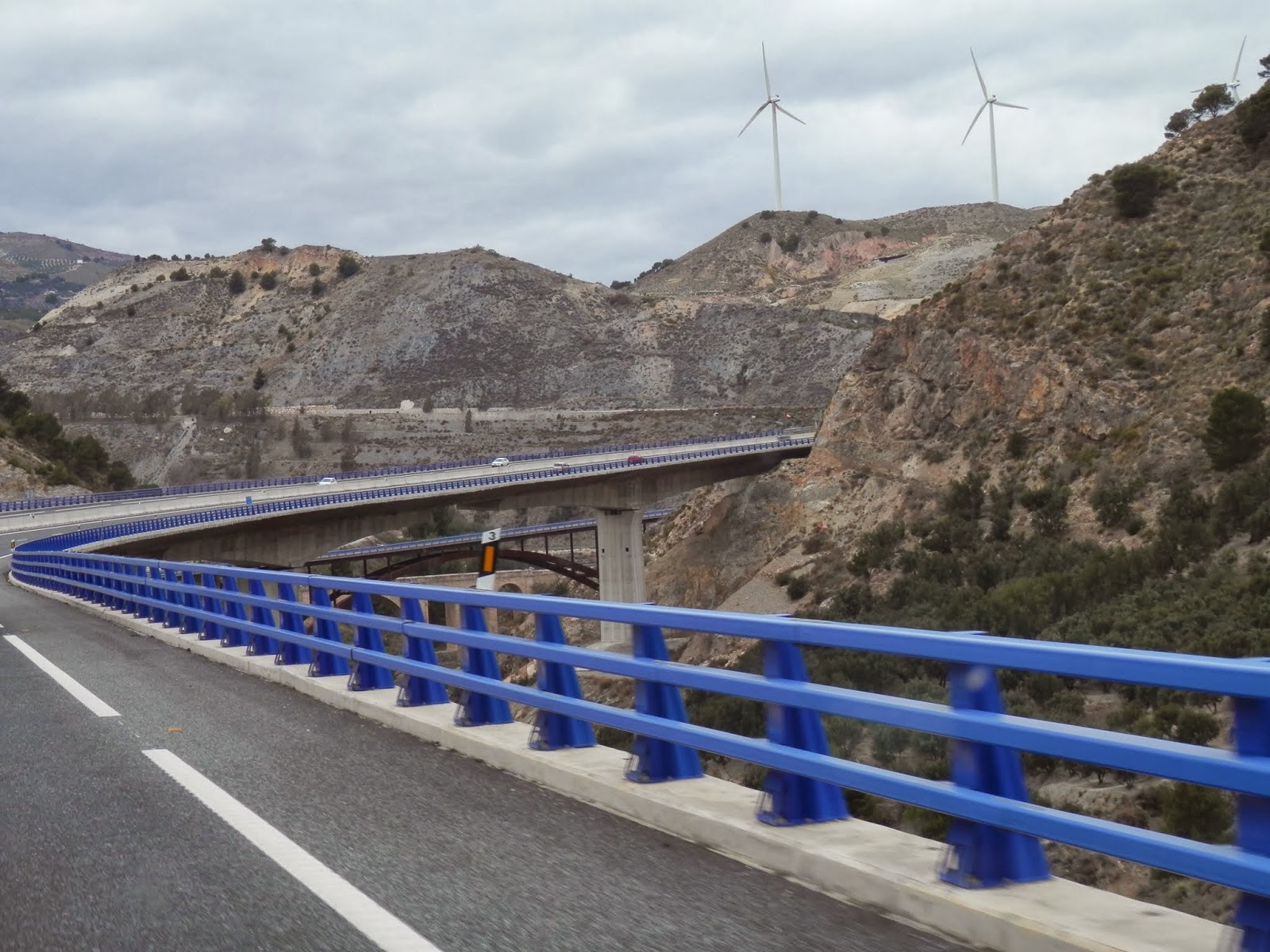 With regard to Moho; whether we hadn’t allowed enough warm up mileage before we started the ascent, or whether the prolonged ascent with our overall weight is too much I’m not sure (I wish I’d dumped our water, and not taken on fifty litres of diesel, when we had enough to get up). What I do know is that I’m going to have to trace out some wiring, check some fuses and maybe even phone the Moho Technical Support hotline ... Benchsound in Stanford le Hope, to get some ideas about when fans should kick in. 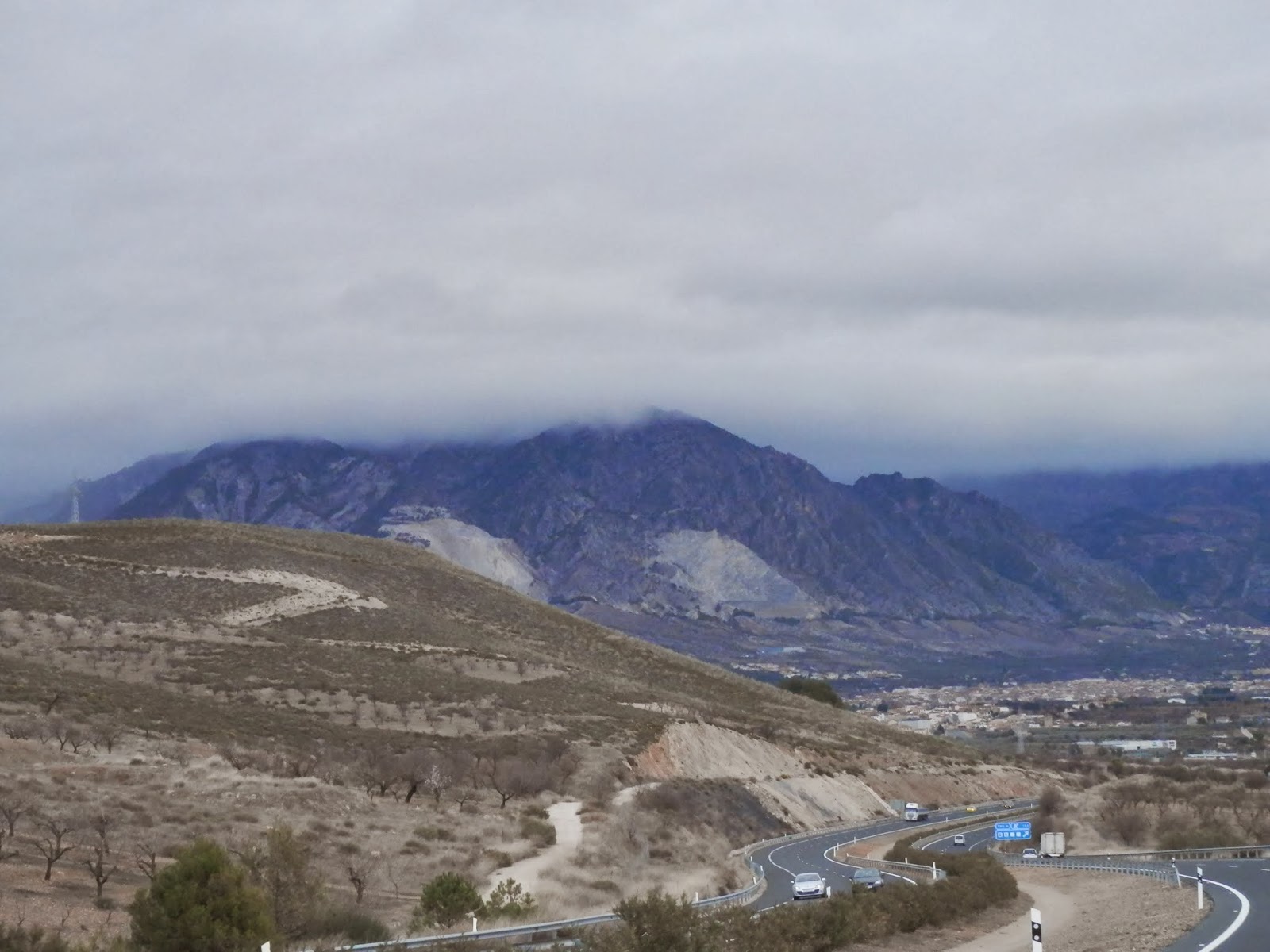 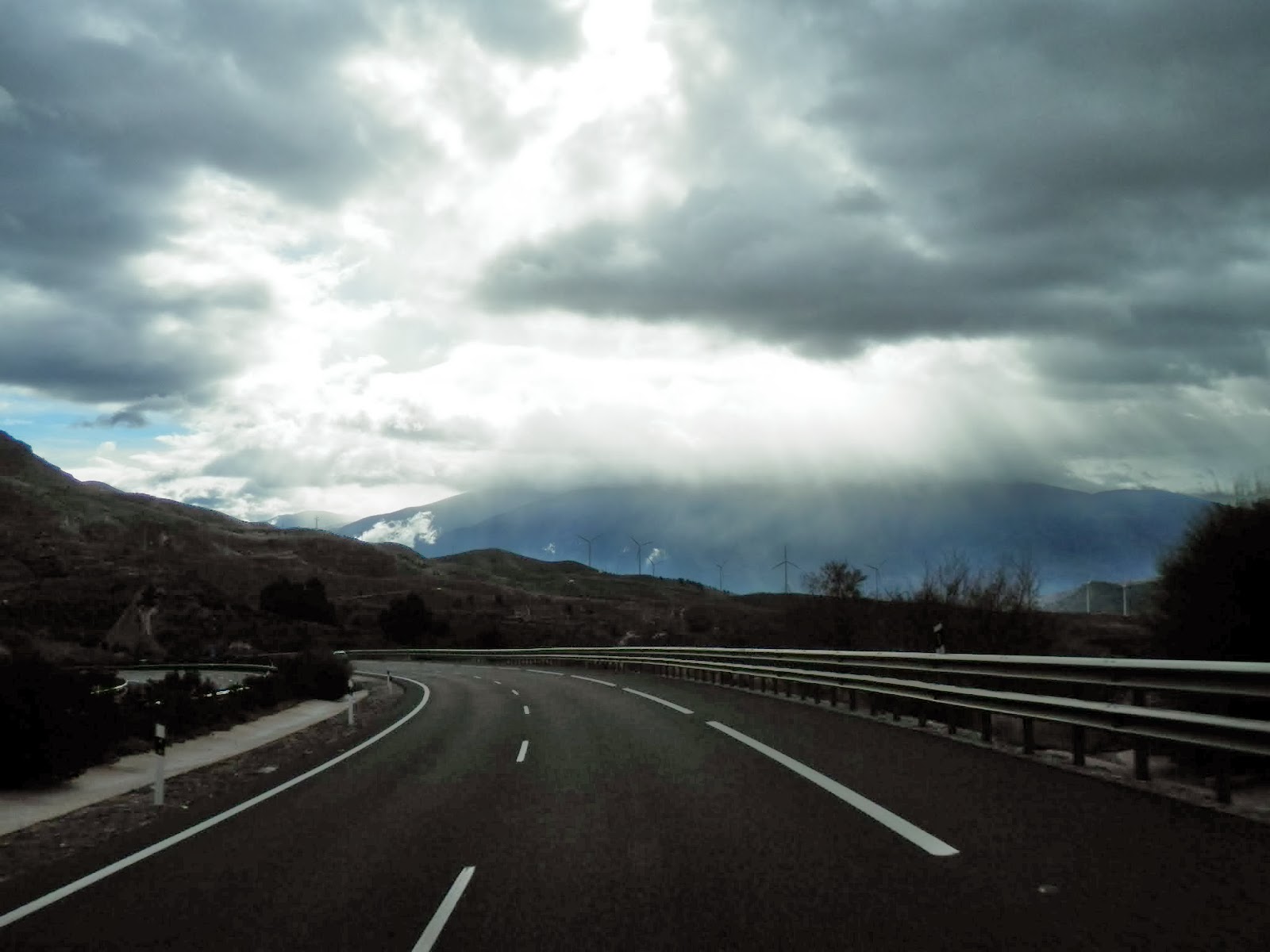 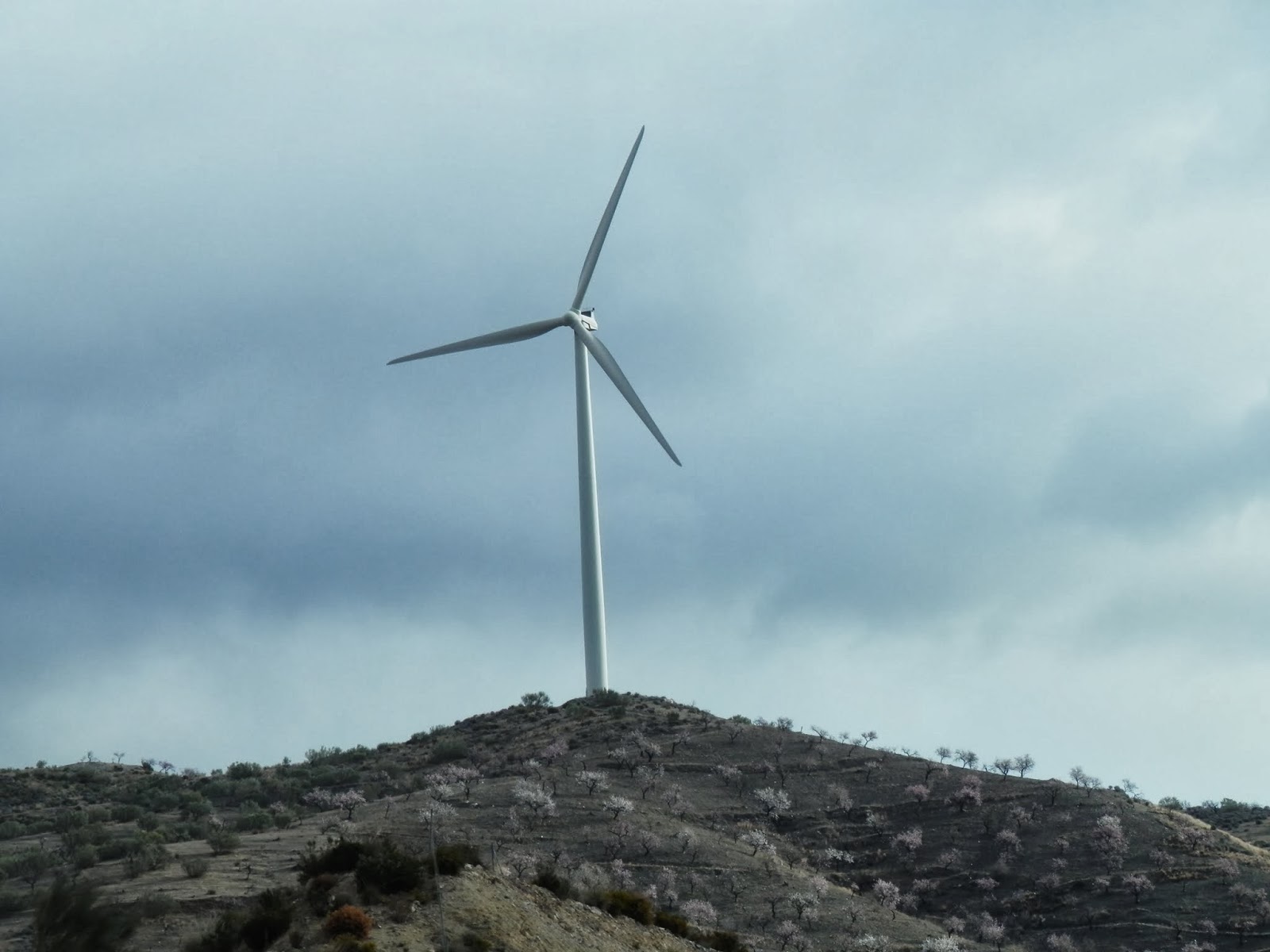 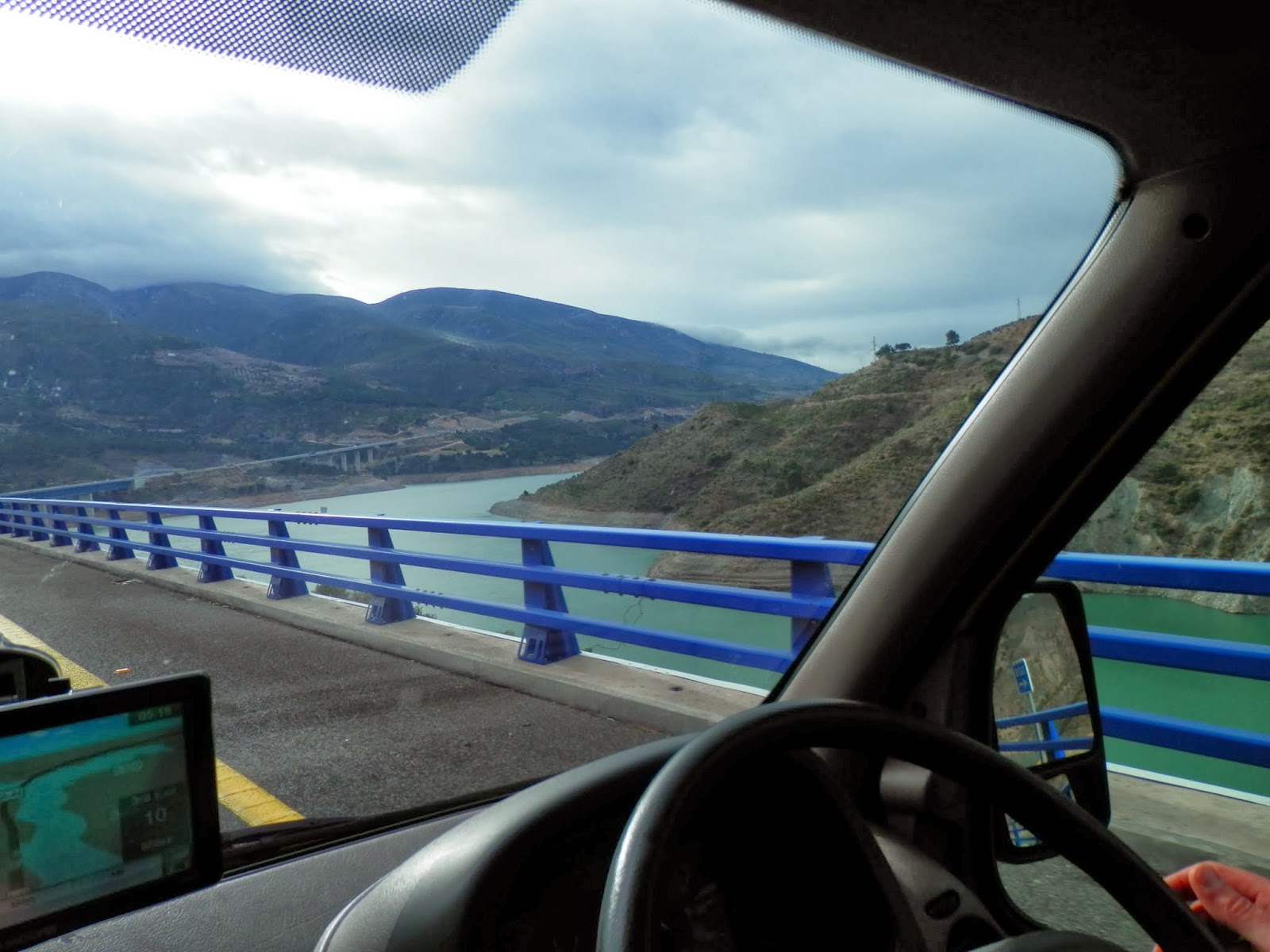 We can manage the heat old school style by whacking the heater full on and turning the cab into a blast furnace (up at those heights entirely welcome I can tell you) until we hit a downward stretch, and then the temperature drops back to normal quicker than you can say `Panic over’. What causes concern is the fact that there is no fan noise run on after the engine has stopped. And when I deployed my Triangles and donned my HiViz jacket to pop the hood, I got really concerned because both fans where idle and we were the proverbial gnats cock off redlining. 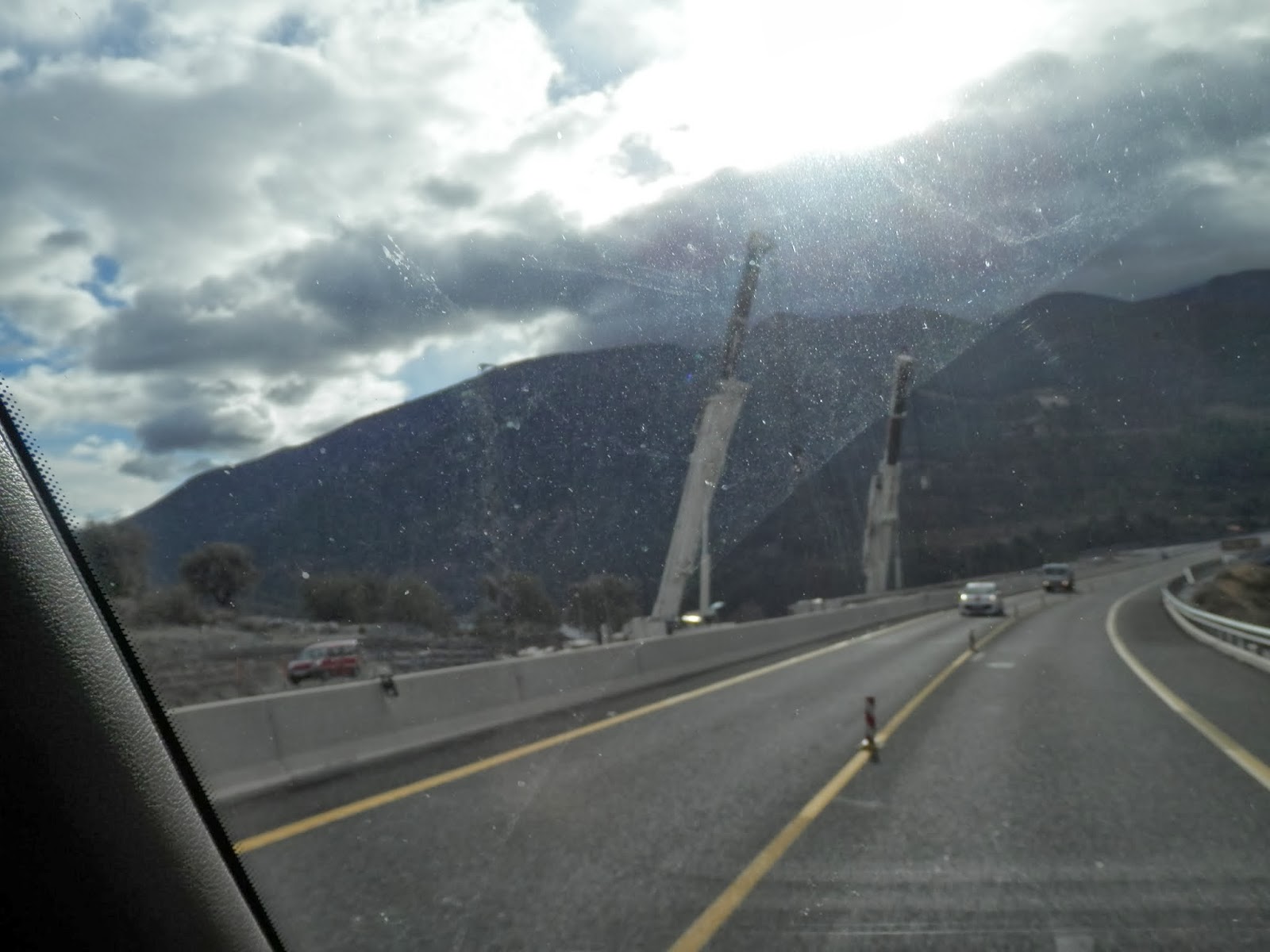 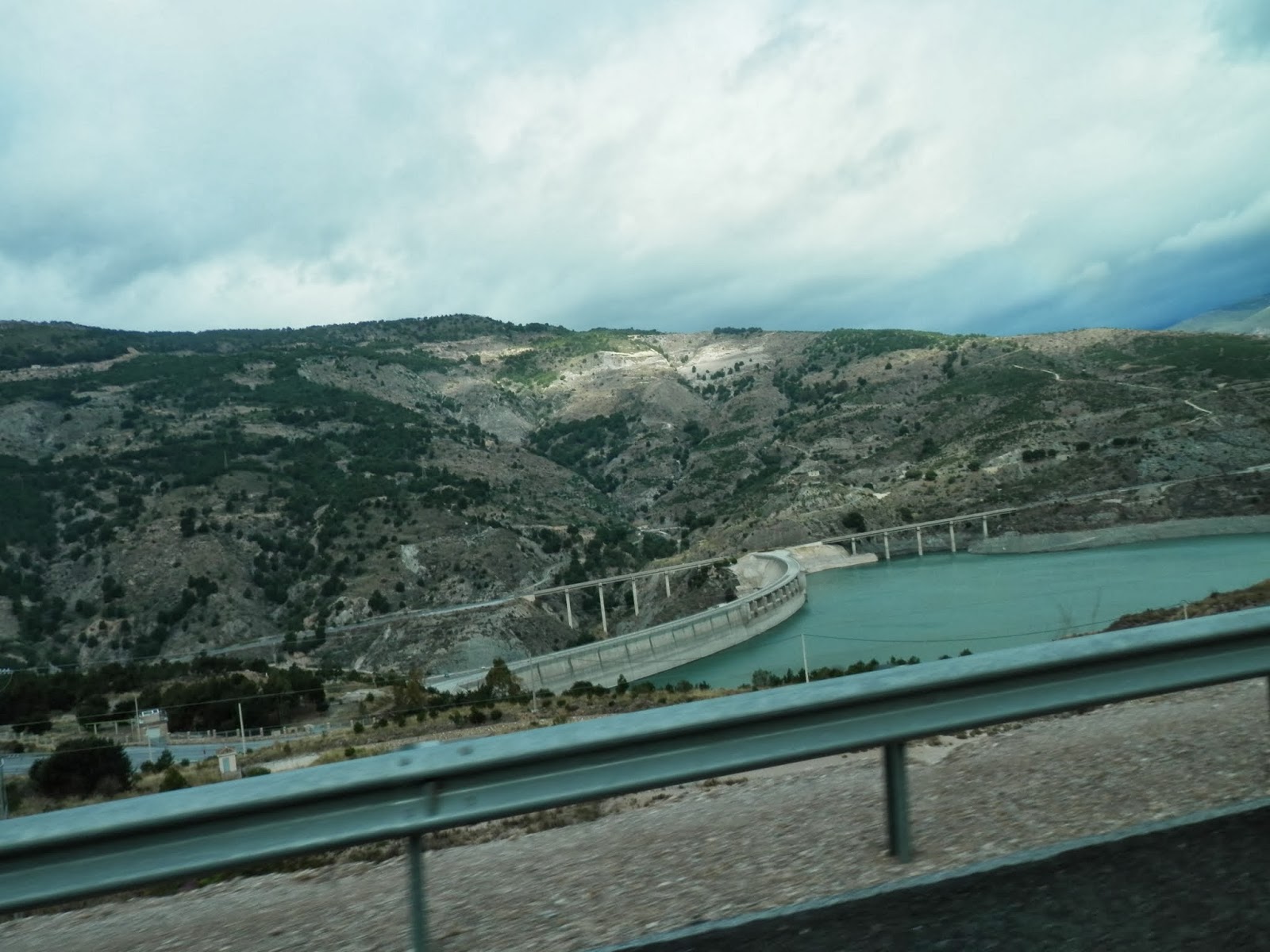 A part of me thinks we need newer rings and bearings to give us the muscle to pull uphill (engine re-build ... and a new gearbox to boot). We had it planned for when we finish, but we may (as long as we aren’t forced home by the horror that is roadside breakdown in the land of foreign), take a two week break on our return in May and get it done then, before we carry on and do the UK. And or get a recon lump, engine mounts and gearbox from a firm that specialises in Master/Movano/Interstars, and get our good friends at Benchsound to do the necessary without rebuilding the old heart (though a part of me thinks that’s unfair ... call me sentimental).

We talked a week or two ago about upgrading and just getting something bigger with more bells and whistles built in. But for all their advantages with regards to internal space, they are cumbersome and indiscreet. We’ve lived in this unit day in day out for five months, and been in Spain, for seven weeks, we’ve paired down what we need to a minimum and gotten by (if the truth be told we could actually make up a parcel and send 20kilos of unused stuff home). I think often when we are on the move about the Top Gear fellas, and the way they invariably fall in love with the old bangers they buy to go on their daft adventures (most of the time). And that’s how we feel about Mohomoho (so good they named it twice), it’s not just a shiny gin palace on wheels, that you change out every three years as it’s due for its first MOT and maybe use for a dozen weekends a year, or a drive ornament sitting doing bugger all 99% of its lifetime depreciating and making you regret the notion of independent travel to far and wide places. Or for that matter the wagon you drive from the UK, to the same spot somewhere down here in Spain at the end of November and stay in the same place year in year out for the last fifteen years  (we’ve met dozens of them). It boggles the mind, you drive a thousand miles and more across some of the most spectacular country in Europe, stop at the same five places you always stop on the way down, put out your awning, side screens, corner lamp from your lounge bring your Christmas Decs, and after three weeks you’re as cold as a local and wrapped up like and Eskimo. It’s insane. We actually met a woman at our very first campsite who told us we wouldn’t find one better in all of Spain ... however she had never been over the hill to the beach where we took this picture.

When we wild camped in Cabo de Gata we met a big bald friendly giant German called Kurt (his missus was faffing inside), he was driving a 24 year old Mercedes overcab unit painted Desert Brown, later that evening an equally aged small American camper turned up, and at the furthest extent from us was a Mercedes flatbed truck that some clever bugger had bolted a caravan onto. In La Marina a mile or two from the Camping International site we found three Dutch Mohoers, riding around in various forms of our old Talbot/Fiat/Peugeot, at Ribamar on the road to Penniscola (the ball and back breaker), we saw a couple in Unimog conversion (a full on overlander)), and another in a Westfalia panel van conversion named after a famous English explorer (whose name I have tried to retrieve from the banks with 0% success). In Mojacar we met a French couple in their late sixties, in a ten year old Landrover with a rooftent pulling a trailer tent, who shared their photos of trips to Saharan and Sub-Saharan Africa going back to when I was six years old ... I could go on. The point is all those out there on waney edge grubbing around in the free places stopping at out of season campsites every few days for a battery charge and hot showers, otherwise always on the move don’t seem to be in the latest unit off the production line, they’re in old wankers they keep together with duct tape, and oft made silent prayers to the gods of the roads. We are but beginners by comparison and by years, but what we have and what Mohomoho has (as did the old one) is our hearts, and our minds can’t or won’t get past that.
Posted by ILTYT_Adventure at 08:55