14.5 kilometres to Peniscola (pen- ISC-ola) ancient fort town, circa 13th Century, along a` road’ ... in the broadest sense of the word from Ribimar.

This road runs along the seaboard face of the Sierra Del Irta National Park and will never be made, except the switch back section up an eighty metre or so mount upon which an ancient guard tower stands, bleached and blasted white by dust and salt) before reverting back to petrol tank scratching, ball breaking, wheel spinning aggregate. 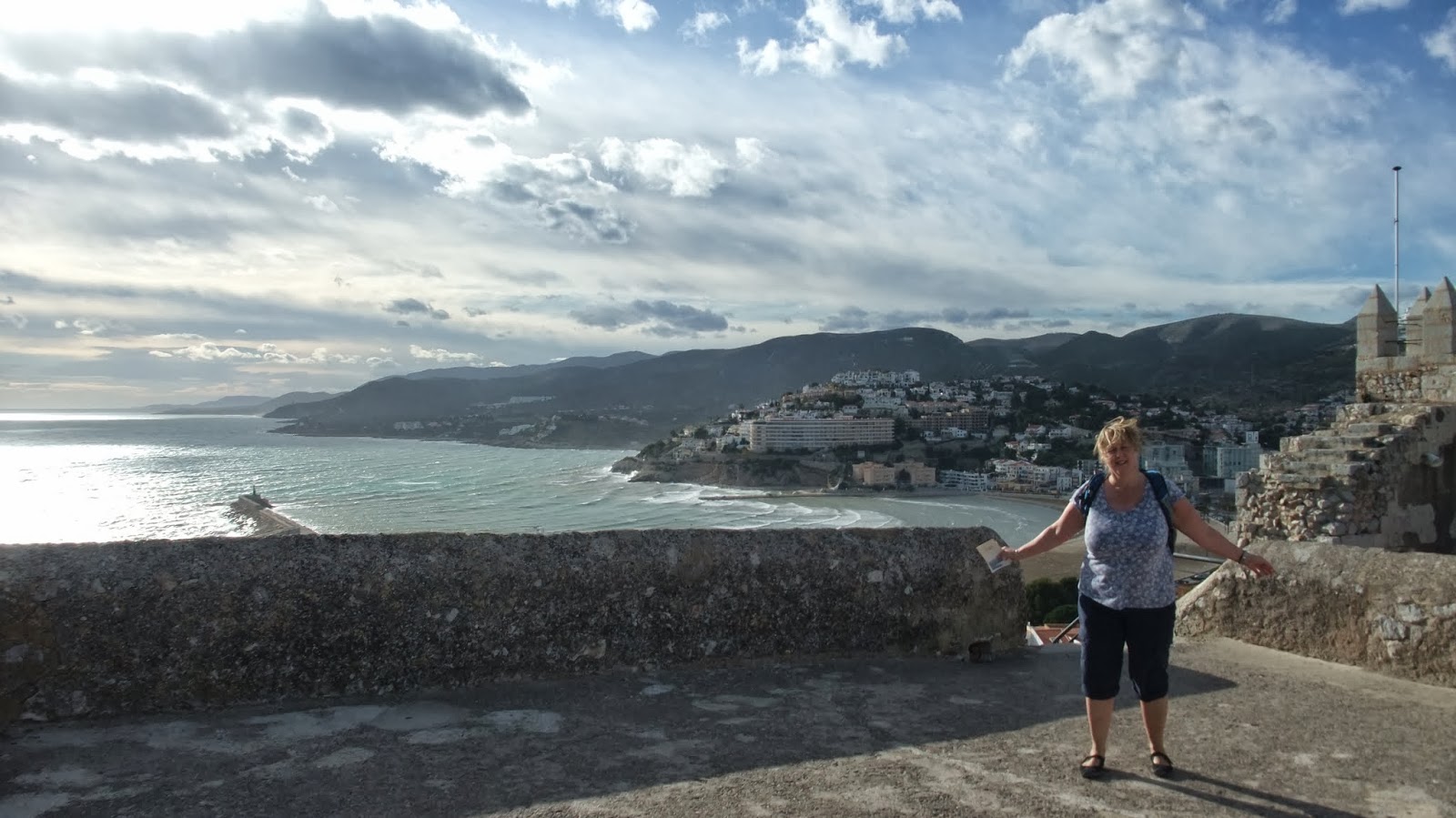 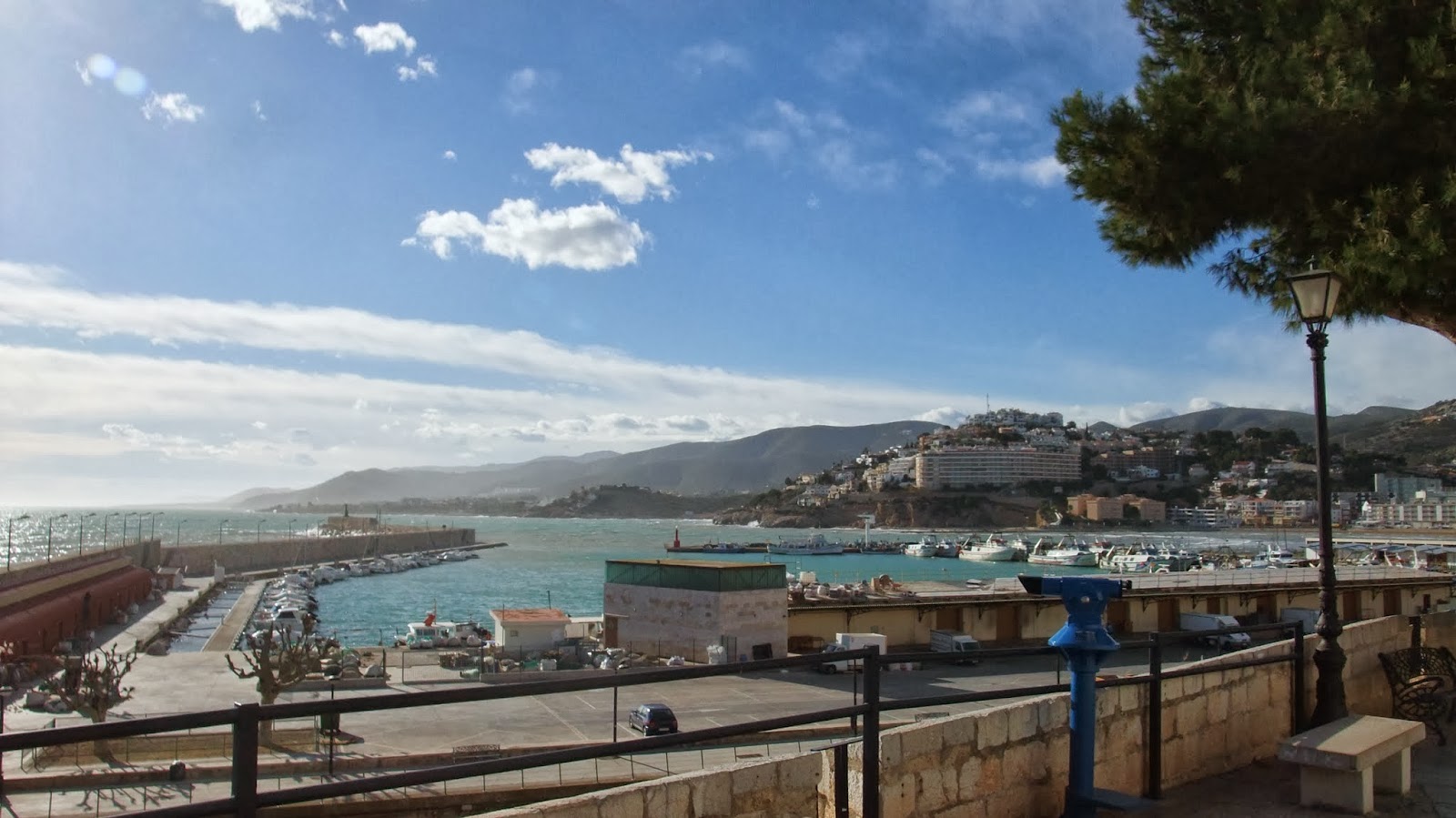 The tower looks south down the coast to which Peniscola would be blind (the direction we came from). Once it would have provided advance warning to Peniscola should marauders or invaders have sought that towns blind side, with the quick wind filling their sails and the one or two shallow bays before the mount, where those invaders could beach their ships and march the coastal path downhill (mostly) to the town (though to be fair they would still have to f*%@ing mad to do it ... glad I’m not a suicidal 13th century soldier looking for glory in the next life by getting well and truly killed in this one). 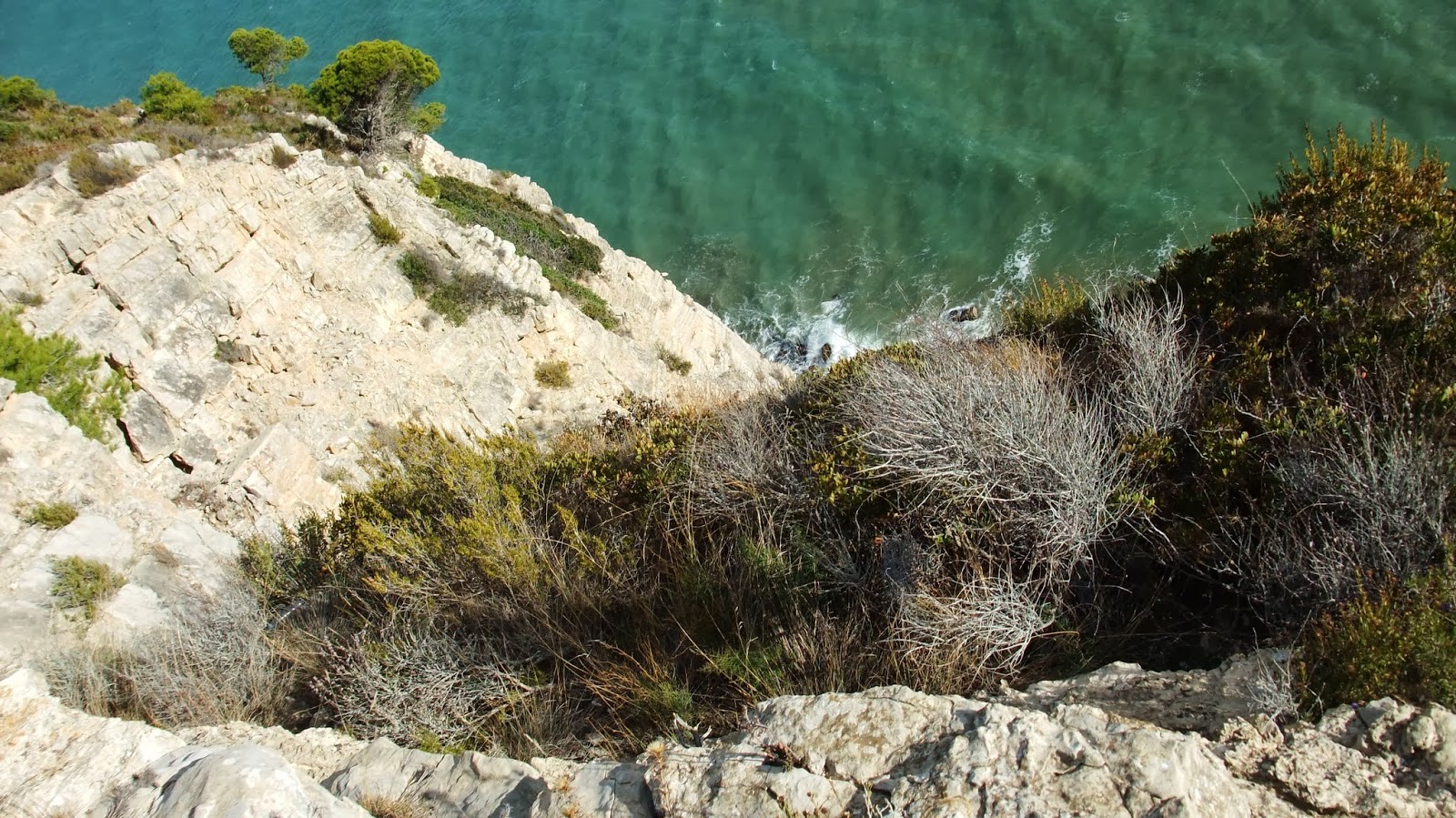 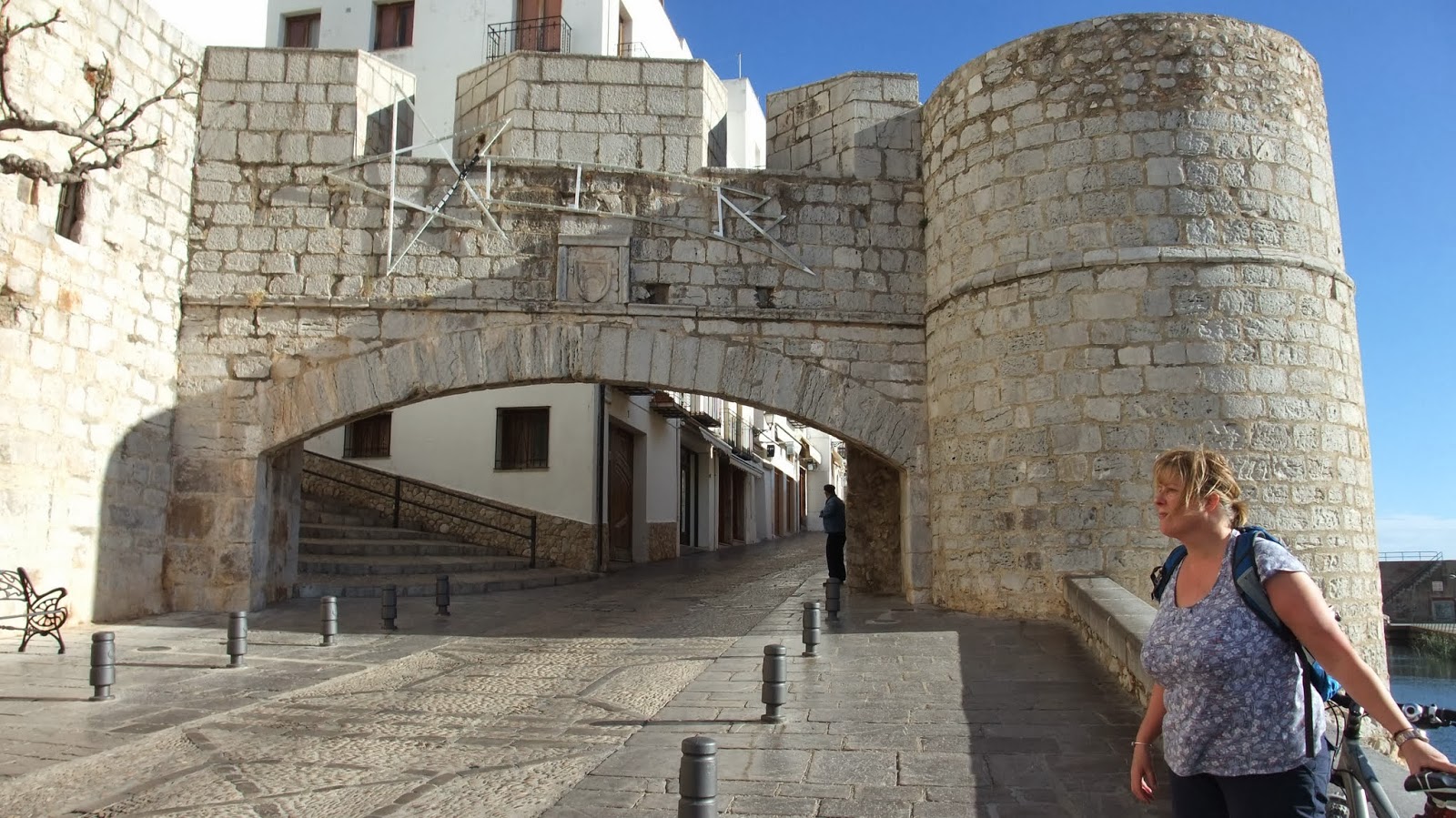 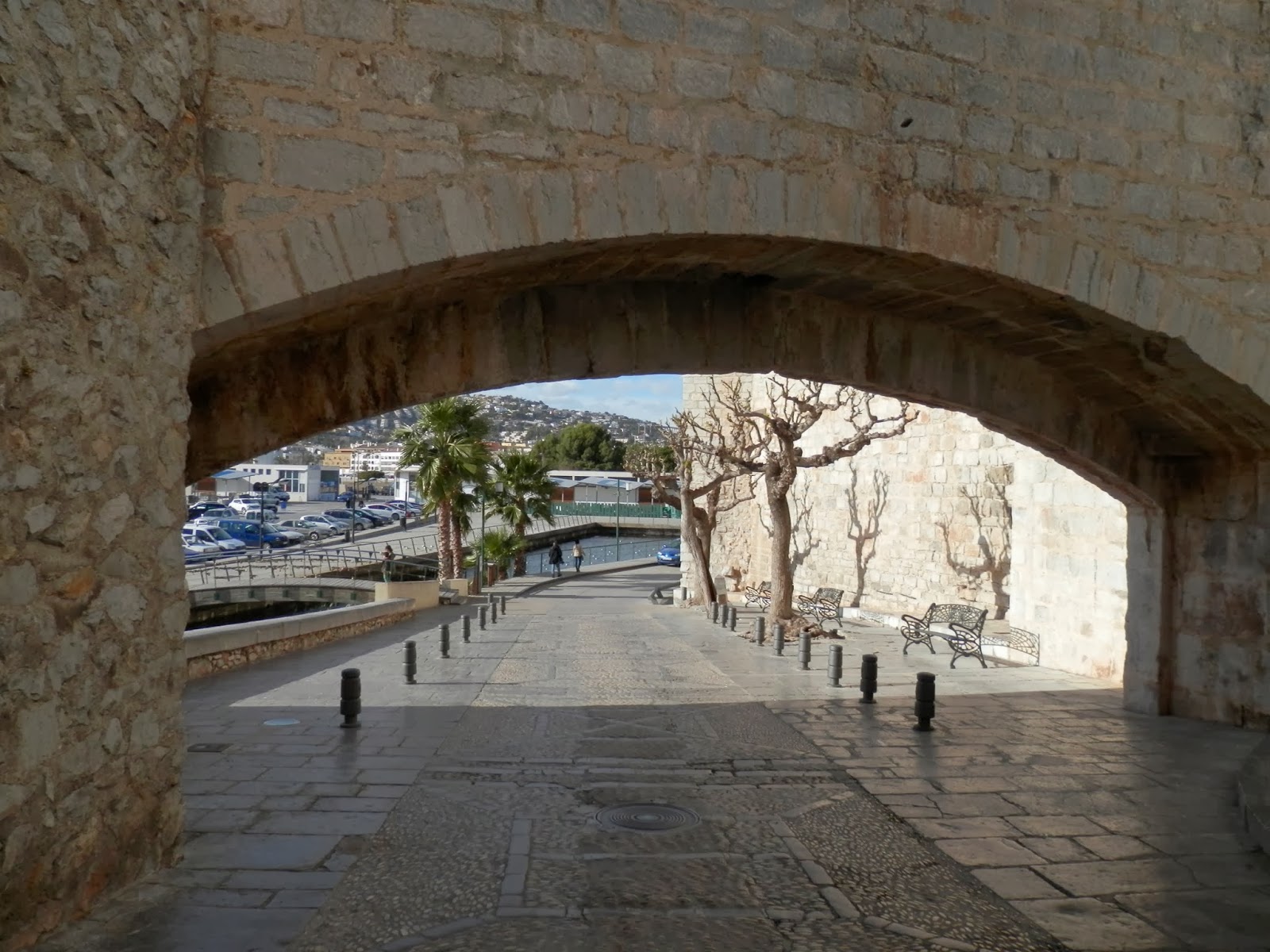 Looking north the 3.5 kilometres as the crow flies from the old watch tower (8.5 along the road, it’s that twisty) to Peniscola, the cliffs rise almost vertically from the sea. Only the ancient harbour would allow safe landing for those visiting the port on legitimate business, and one assumes the beach beyond, where ships could be careened or beached. The old walled towns buildings gleam white in the midday sun, rising to meet the old Templar Castle, with its buff walls parapets and stair cases only shoulder wide, steep enough to kill a falling man or stall a charge. Here and there those walls bare the scars of artillery fire; football sized pockmarks in blocks of stone dressing a cliff. I have no idea if those shots were badly aimed or deliberate. What I do know is that those shots were wasted utterly on walls that in some places are two metres thick, and as noted above literally just dress the under lying rock.

I suppose in my ignorance; having never been subjected to a barrage of cannon ball fire, I can't imagine what it was like for those inside the walls when cannon balls hit. However, when the gunfire ceased I think I would have been happier to be inside than out. 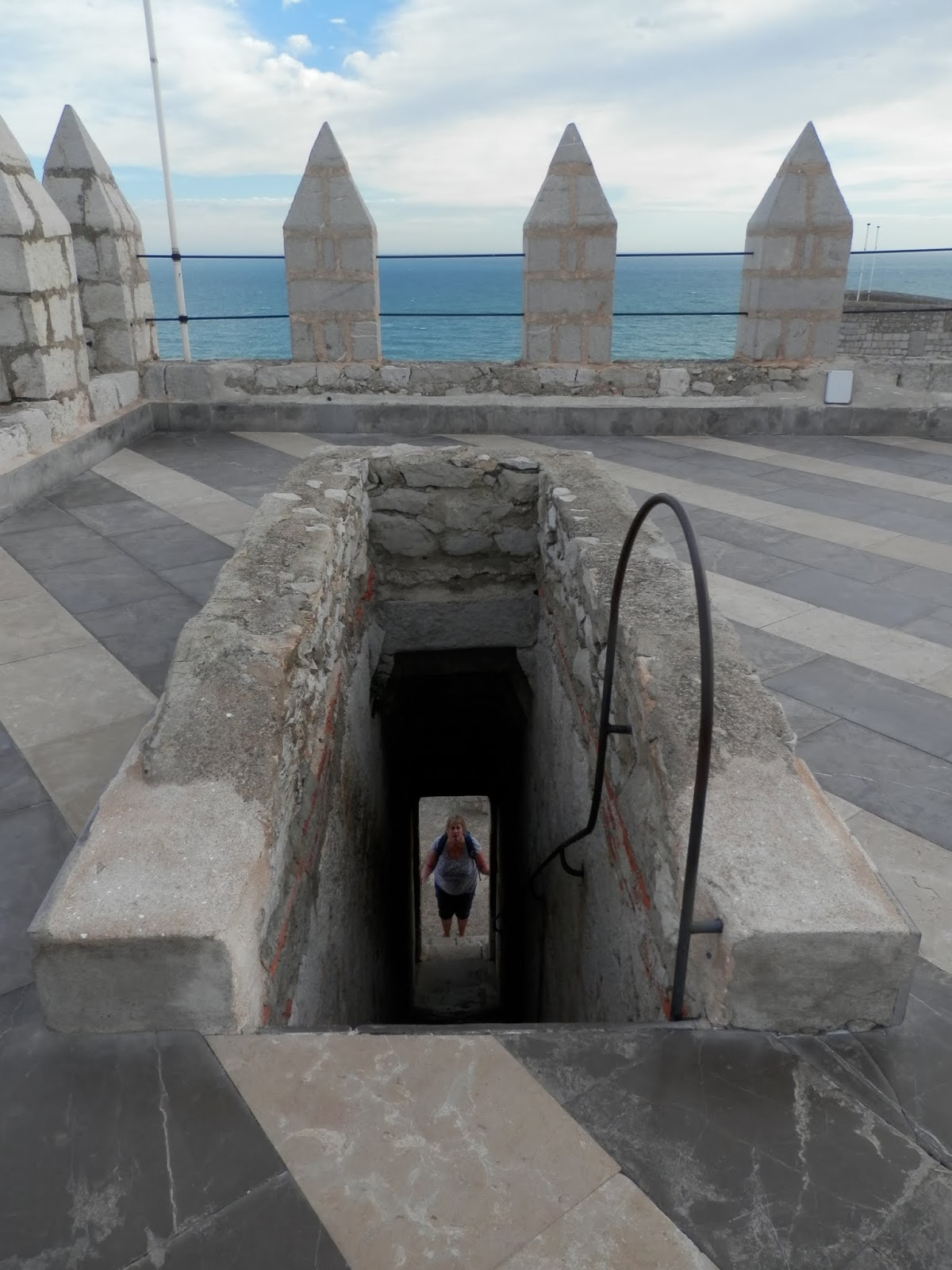 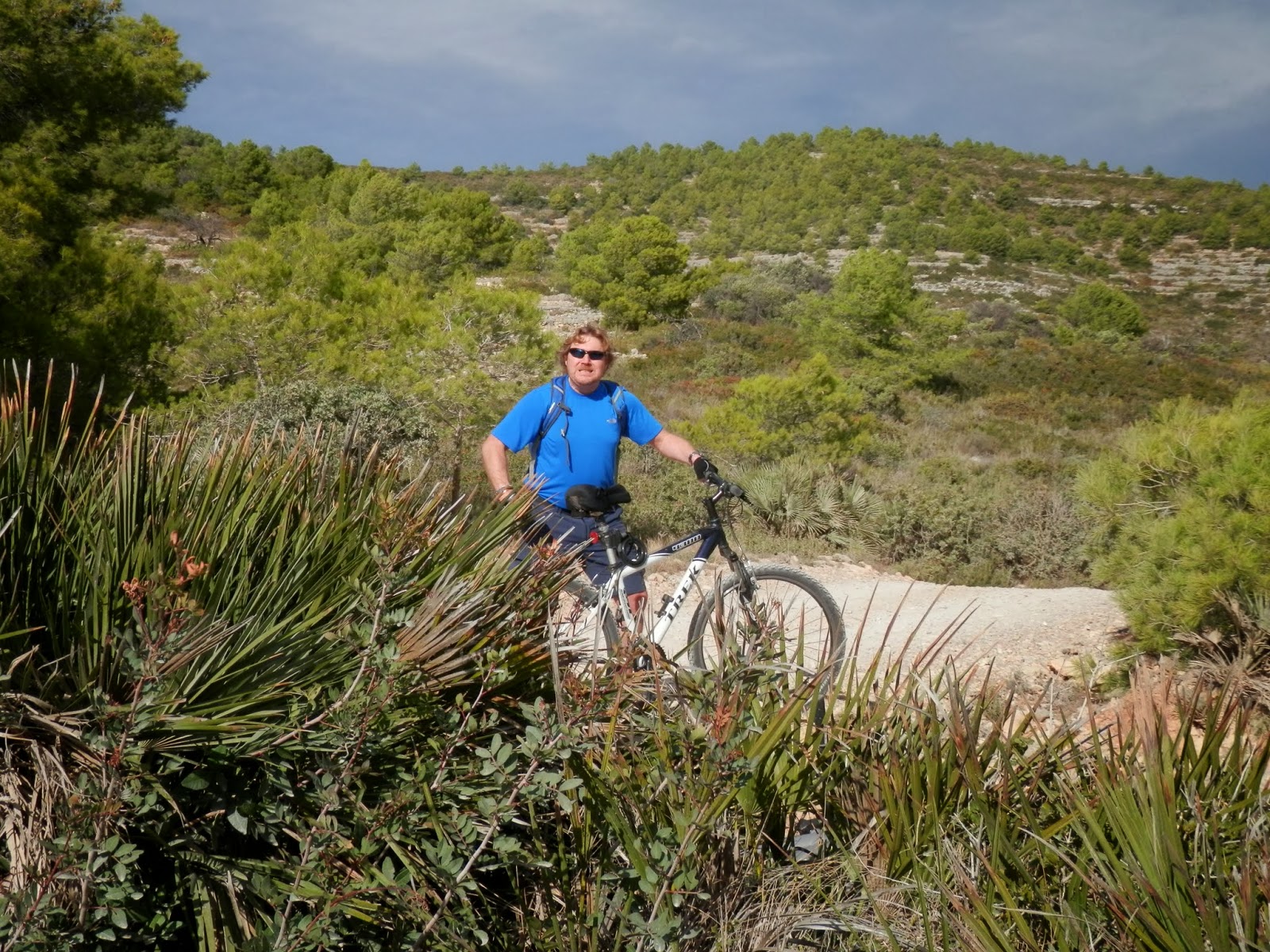 The strategic importance of the castle (I think) is highlighted by the fact that the much more modern lighthouse, is set so much lower down the sea facing side of the town on what may have been a castle precinct sometime in the past. 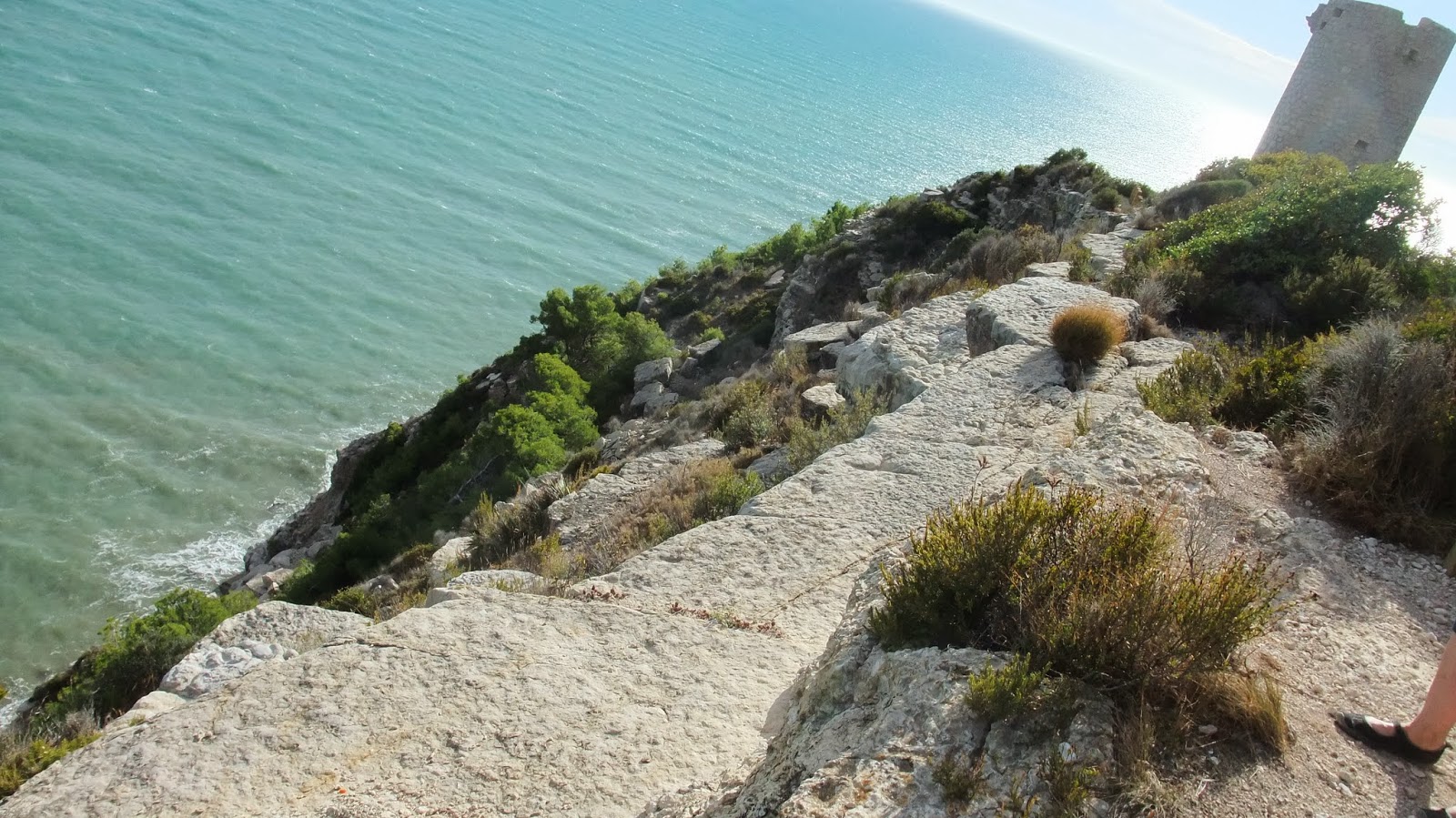 The road itself was tough. The going there was hard enough but exciting because all that lay ahead was undiscovered. The return was nearly, very nearly a nightmare. The wind had been building in all day, and sped us forward. On the return, that same wind was in our face (the forecast had predicted the wind to turn ... it did, the following morning). The wind was shearing along the seafront from the south, turbo rolled along the escarpment into a gusting, dust hurling forcefield that defied low gears and in addition to the long steady gradients that eventually stopped me dead in my tracks, turning my bike into a wheeled walking stick and faithful leaning post. My quadriceps eventually cramped under minimal load; forcing me to kneel at the roadside to stretch, without inducing calf cramps. This so I could then walk the gradual but lengthy inclines to the next downhill stretch of track, and then roll, brakes on down what can be described as scree, dust and nubs of boulder jutting shiny and smooth from the car width path. Amanda took a fall when we were literally a mile from home, and boofed her wrists and knee, and collected some nice gritty road rash.
Posted by ILTYT_Adventure at 11:49