With the right funding and back ground I would have been killed many years ago, on a reckless and ill thought out expedition up K2 in my pants wearing a fruit bowl hat and cowboy boots. Fortunately or not depending on your viewpoint, my back ground and funding never allowed such frivolous risks to life and limb, and in all fairness as a child in the seventies with asthma, I spent a lot of the time (allegedly) at deaths door. 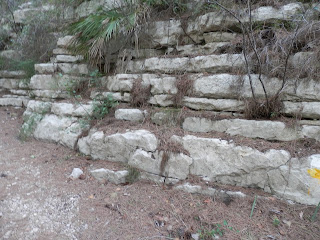 I remember things slightly differently, I remember playing out on my bike, falling off now banned school climbing frames, and jumping between roofs of adjacent garage blocks on a green that had been created because a V2 landed there one night and destroyed or damaged more than seventy houses (and nearly killed my dad whose ceiling fell on him two streets away). I remember running about over what had once been a municipal dump in a corner of Newham now occupied by Newham General Hospital. It was an L shape of land that had a central dirt track running through it, and various branches running off it. It was a mixture of grass and scrub, blackberries, Elders, Japanese Knotweed and Nettles (there were no tall trees). South of this was the old A13 dual carriageway (now a four lane artery that pumps vehicular life into the new city of Docklands and to a lesser extent the old City of London). In those days there were enough gaps between cars that you could run across the A13 in two well timed hops (today you would be killed by lane two). The south side of the A13 was a vast expanse of marsh, derelict fallen downs, part filled in craters from repeated German bombing raids.  The occasional Pillbox subsided into the soft ground. An old style and early container yard (the type that saw an end to the Royal Docks and its sorting warehouses ), and literally hundreds upon hundreds of open acres of not a lot ... I forgot the stinking abattoir, Zif Meats where you could find the horns of cows, hollowed and gnawed by the lord gods many detritivors from rats down the chain. 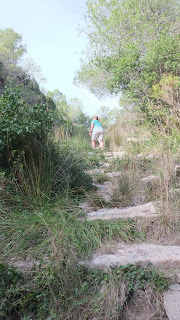 Heading east you could be on open ground with the odd fallen or trampled down fence from days of yore until you arrived at the banks of the Thames at what is now Galleons Reach Outlet shopping thing. You could wander among the giant fallen in and derelict monoliths of the old Beckton Gasworks http://en.wikipedia.org/wiki/Beckton_gasworks (for those who would like to see the place today, watch Full Metal Jacket, the city scenes were shot in my once playground). http://en.wikipedia.org/wiki/Beckton_gasworks). I also found out reading this article to check my facts that other parts of Vietnam were filmed at Cliffe in Kent, a short hop over the river from Tilbury and a place we used to SCUBA dive in (without permission), in the old abandoned quarries there.
Heading south from the A13 you could walk as far as the old London Royal Docks (now London City Airport), and if you were willing to detour round the docks, you could find yourself in North Woolwich, where you could take the foot tunnel or Ferry to the other side of the river (though I digress here a little). Going east through North Woolwich you would eventually arrive at the southern extent of the area left derelict after the Second World War, specifically the flattened remains of Harland and Wolff’s shipyard, builders of HMS Belfast and the Titanic,(though not on the Thames), the shipyard was demolished in the sixties having been run down, not bombed  by Herr Hitler) http://en.wikipedia.org/wiki/Harland_and_Wolff. That open area then rolled north to meet the Beckton Gas Works mentioned above.

What you ask has all this to do with Mountains, fruit bowl hats and cowboy boots, and being killed with the right funding?

The answer is nothing and everything.
Yesterday, we went for a walk, we’ve been in Alcossebre for seven days. We wanted to stop and clear the new year before we moved on again, to let things get back to normal (though we have discovered that the 5th and 6th January are possible Bank Holidays in Spain, and that they are the equivalent of our December 25th from a childs perspective).
We’ve walked the rugged coast here on and off for five days, first from a campsite called Playa Tropicana which wasn’t our cup of tea. It was naff in the extreme, jammed full of little Englanders doing winter Ex-pat things, coffee mornings, sitting around watching telly ... they even had a committee and an agenda for some bullshit, and the site itself was sardine tight with a Roman statue theme (frankly I hated it). We did our two nights and then moved to our current base` Camping Ribimar’, just north of Alcossebre down a dirt track (Moho Moho has done some off-road).
We’re in woods off an unmade road that runs from Alcossebre to Peniscola (Penis Cola tee hee hee) for  15 kilometres. The coast itself is a mix of tiny beaches as little as three or four metres wide; some sandy, others pebbles; from the size of a marble to the size of a football, and every size in-between. There are shelves and layers of different rocks, waiting for erosion and gravity to do their worst and collapsed sea caves.
Inland a few hundred metres the land starts to rise to a height around 550 metres. We scrambled and yomped  520 of those metres, through valleys, then gorges and then ravines, upwards and eventually out onto a goat or donkey track made some time before dynamite blew out a road some miles south. By the way, as we are told Eskimos have lots of name for snow, or correctly types of snow, so the Spanish have lots of names for their high landscape; far more than I can explain. However someone has and here’s the link: http://www.iberianature.com/material/mountainssynonyms.html 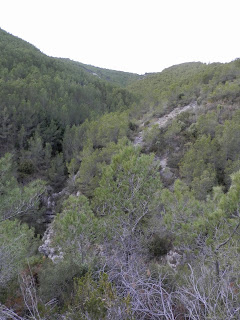 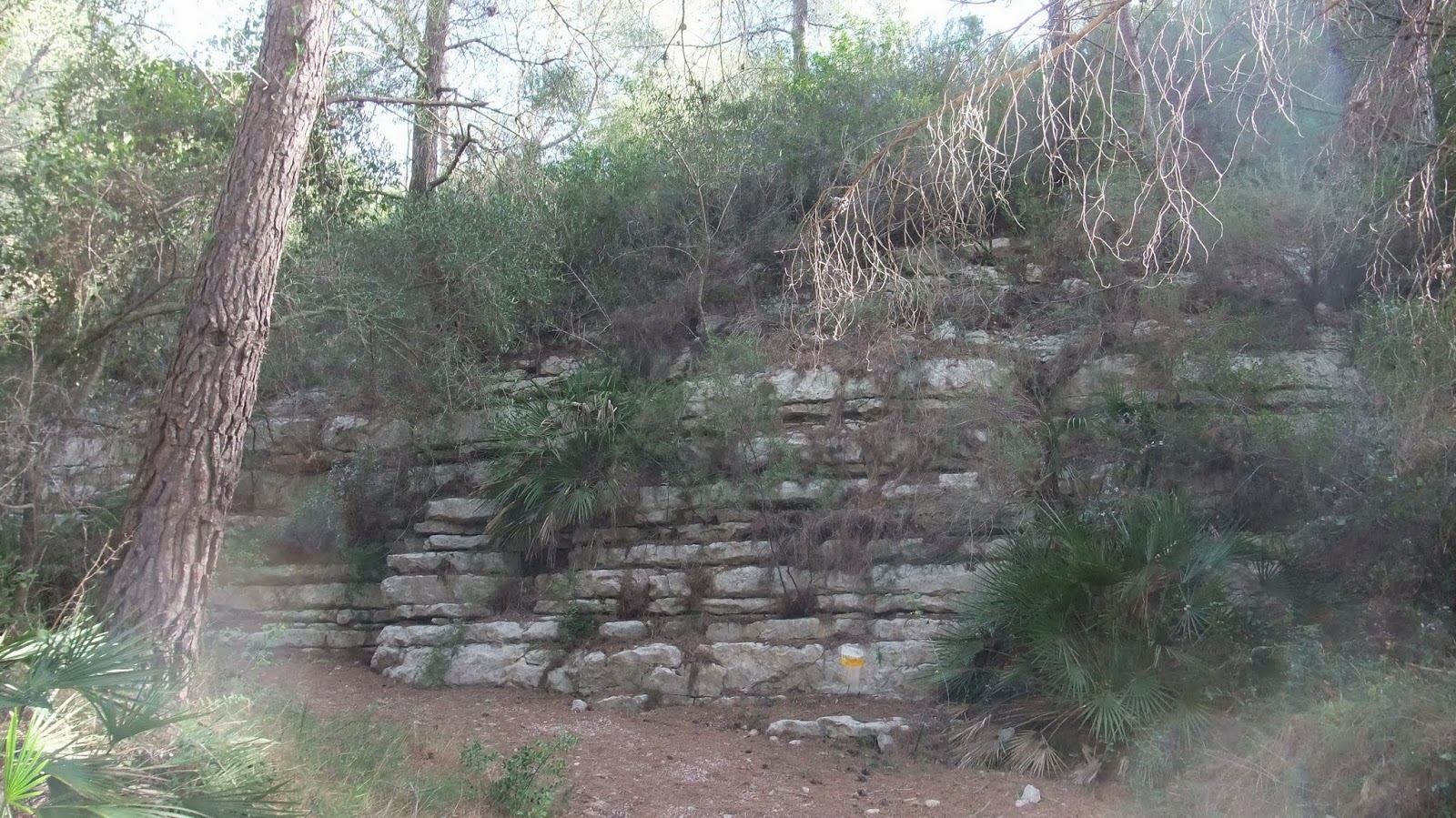 As with the drive across the high plateau, I periodically looked at the barometer readings on my watch, and at our highest point air pressure had dropped from 1014 millibars at sea level to 968 millibars at 520 metres above sea level. I also took altitude readings from the same watch, my now trusted Casio Protrek Triple Sensor Tough Solar Titanium (£350 from Watchshop.com ... other retailers are available etc). 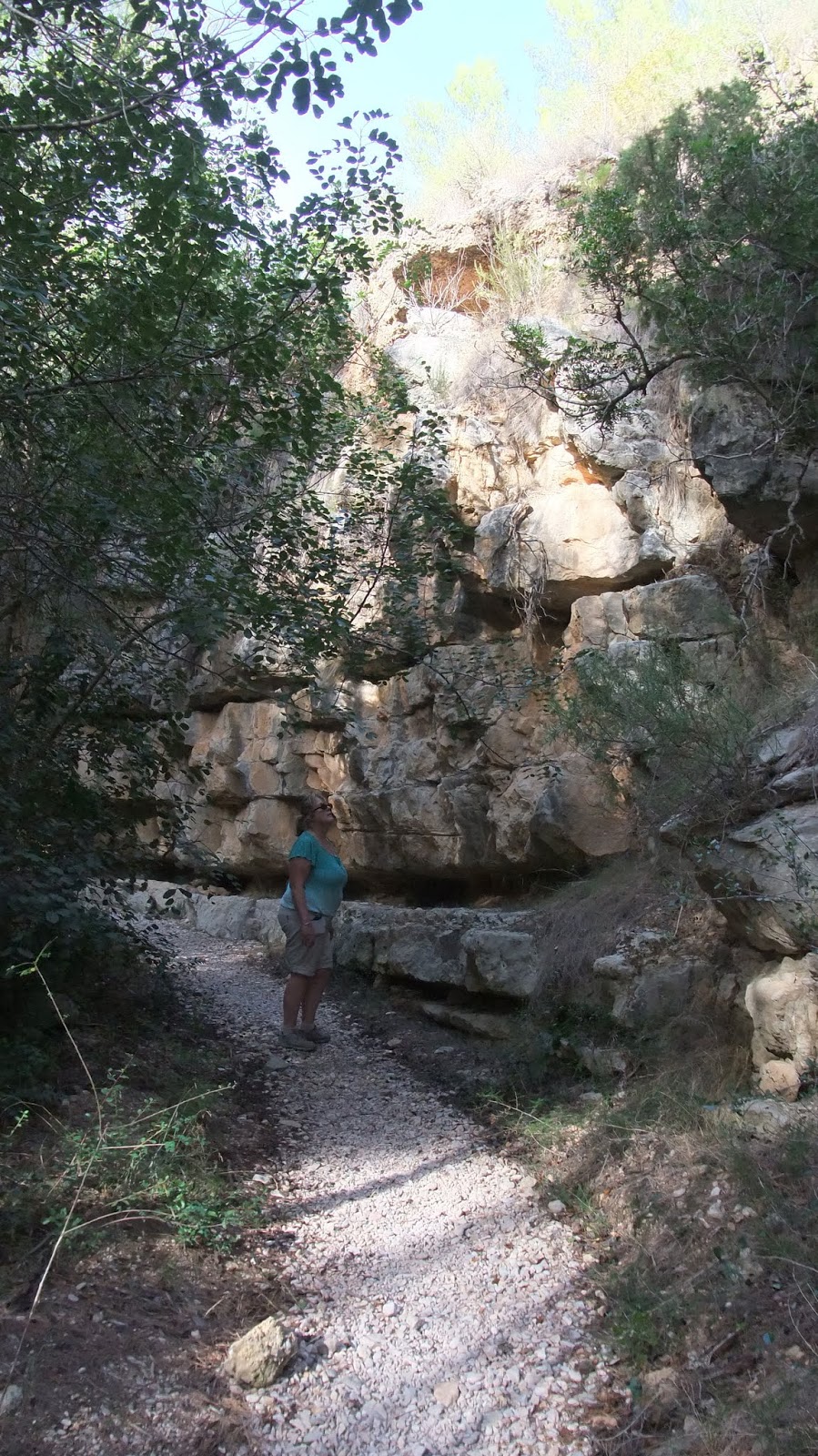 In truth we weren’t as well prepared for this hike as we should have been. We didn’t take enough water and we didn’t take lunch, however in mitigation we had intended only to go as far as the first incline up to see the lay of the land for today when we planned to walk up. And let this be a lesson, them there high mysterious places lead you on, a minor foray with binoculars to see the lay of the land turned into a six hour hike with a litre and a half of water and no food, no torch, no silver blankets (in case of issues), no rope or para cord, and finally no first aid kit ... we were a tinsy bit irresponsible. 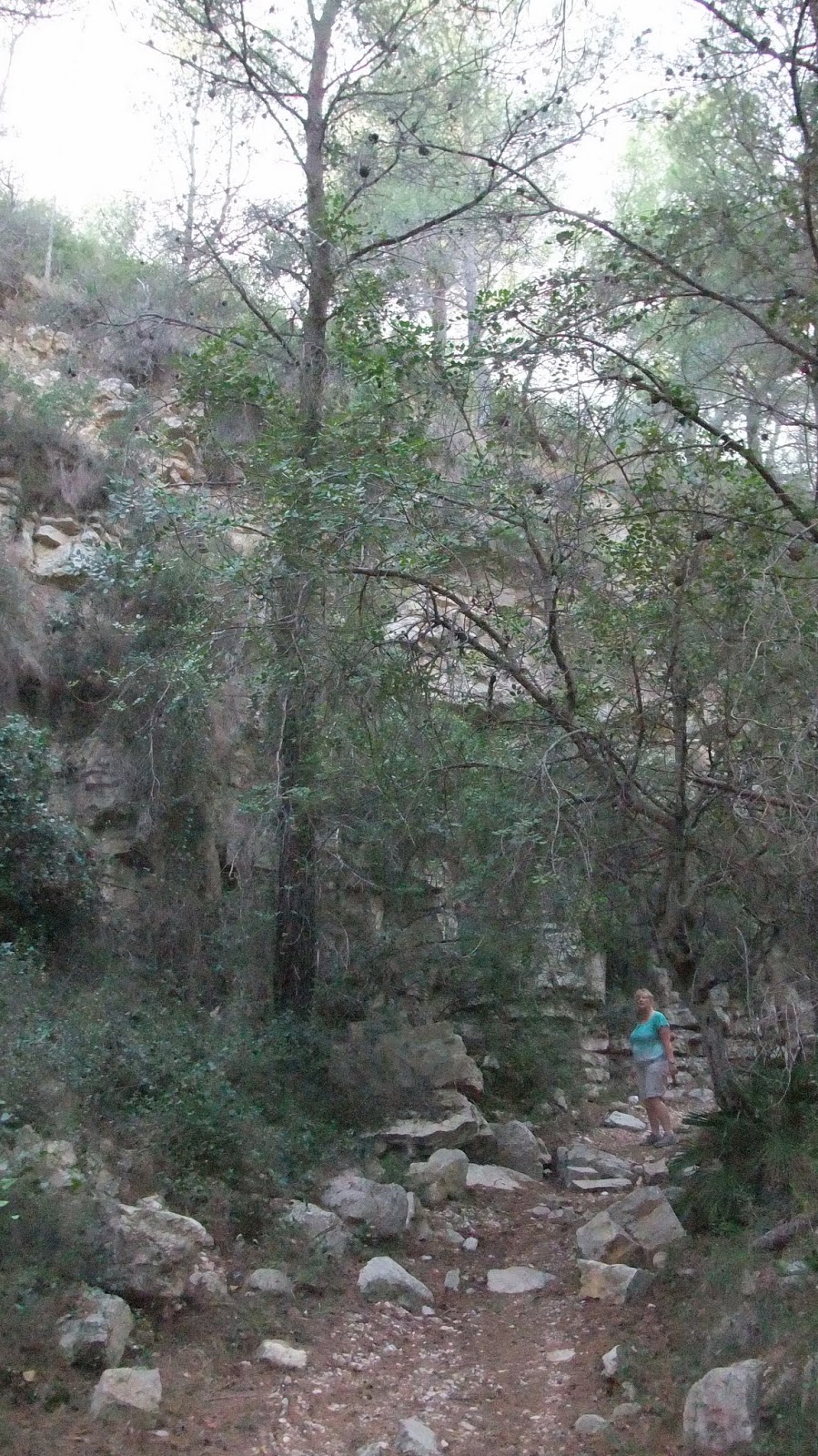 The pictures will fill in the blanks of my description. 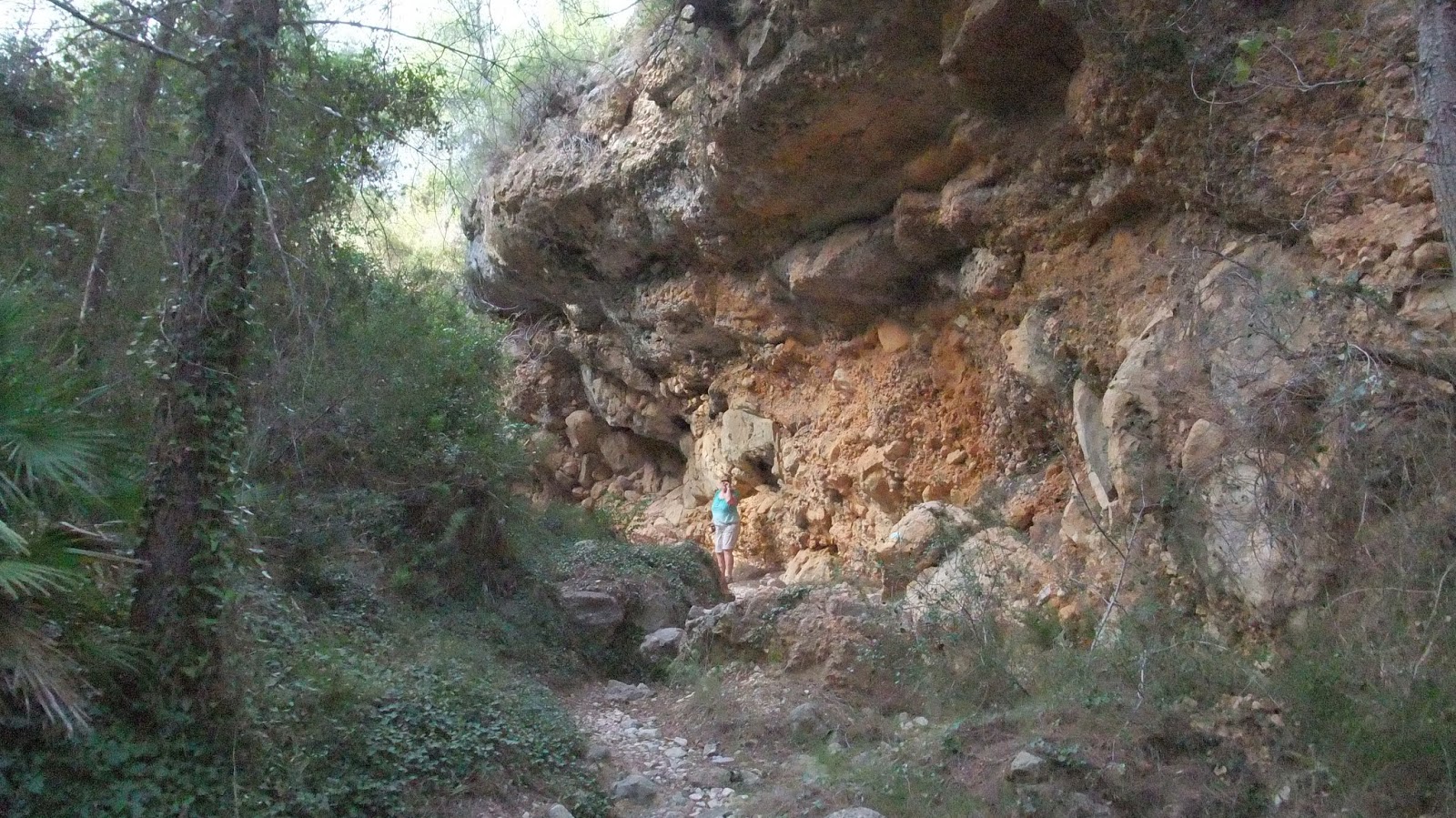 As a child I couldn’t aspire to climb mountains, we didn’t have TV until I was probably eight years old, I had no dreams to aim for. But what I did have was the remains of a part of East London, used as a tip, bombed flat during the Blitz or left polluted by the process that turns coal into coal gas. A vast brown and green waste and wetland, a place where as a child and early teenager I would disappear into further and further, year after year with barely a breakfast in me, no water in a bottle and no real awareness of the risks. And that’s what happened on new years’ day; there was a wilderness, there is a wilderness, and in many ways so much more dangerous than the one I wandered as a child, but we lived to tell the tale despite being irresponsible, and I’m so glad we went up that hill.