This was mostly going to be photos ... but. From Santander, through the (to our eyes) Alpine Basque region, up through the mountains and then across the cold seemingly endless plains of Northern Spain and then down onto the East Mediterranean coast and a seven day stop to allow for Christmas ... an actual holiday, there were some things a picture alone couldn't tell.

These are the voyages of the Moho, Moho. 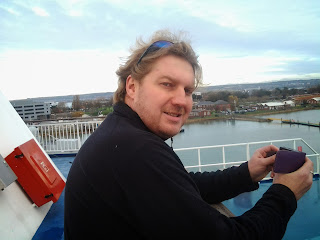 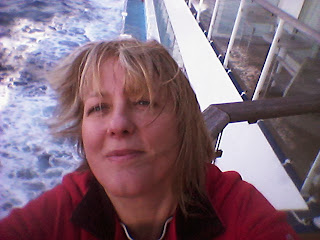 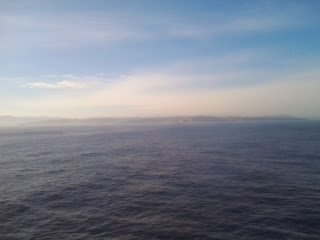 The mountains to the North east are lush and green, there are Oaks and Alders and Poplars, Plains and Beech all doing what deciduous trees do at this time of year, namely shedding leaves and baring their branches to the winds and rains. There are conifers as well: Scots Pine, Stone Pine and Cypress (and lots of others I couldn’t begin to name without a magnifying glass and my Mitchells Guide), both wild and cultivated edging fields and highways. There are wild grown woody slopes and regimented plantations. Where these two types of wood sit on opposite sides of a highway, but on exactly the same gradient and terrain the managed woods look so odd compared to the giant broccoli covered slopes they oppose (there are very few straight lines in nature).
Out of the woods and mountains (where we nearly boiled the vans engine climbing the mountains) we crested the final hill (not that we knew it at the time), and let the Moho cool down for twenty minutes, heater and fans full on, windows wound down, engine still running. There is a strange place of transition up there, the woods peter out, the signs warning of snow or ice disappear, and the traffic thins to virtually nothing (not that there is a huge amount in the first place, just what there is, is enormous ... huge HGV’s hauling Timber and who knows what). This is the high road from Santander to Bilbao and beyond and the start of the vines. For forty miles they stretch along the road on both sides, and to the limit of your vision, a vast monoculture of grape, no trees, just rust coloured soil in great flat fields or walled terraces, home to possibly millions of stubby pruned vines. Far to the north and far to the south higher mountains capped with snow enclose and isolate this arid looking environment.

At Bilbao we managed through a foolish attempt to avoid paying tolls to get routed through the city. A long way from the transporter bridge or anything worth seeing or stopping for. We were just stuck in a commercial district, among a confusion of pedestrians, weird traffic lights, one way systems, and road works. They are doing a lot of road work in Bilbao, and the Satnav gets very confused. In the end I used the Force ... well I just bullied my way to high ground, away from the madding crowds, and in the end the Satnav found our elusive motorway, and we were off again, we’d lost an hour or more, with more than a hundred miles to go.
Out of Bilbao, back up to the plains and vines, the Rioja region and maybe another eighty miles of grape, interspersed here and there with  fruit trees that I think may have been cherry, and wind eroded rocky outcrops. We saw huge birds of prey gyring and soaring, or hovering like our own Kestrels near the roadside, and once one flew beside us at head height to the Moho’s cab. 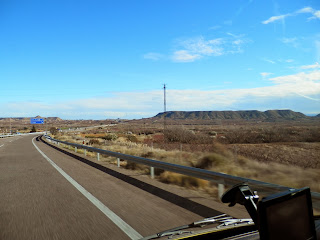 We eventually arrived at Cascant a tiny town with an Aire 45 miles east north east  of Zarragosa, just as the sun set, which meant the last ten minutes of the drive was done in darkness. This was our halfway point and having driven over two hundred miles we needed a walk.

We mooched the streets of Cascant in the dark, a strange mix of ancient and modern in such a small place. Streets barely a car or cart width wide, an ancient monastery castle with a cleverly designed cobbled slope with steps. A central courtyard in the oldest part of the town where five lanes met in an ancient central precinct, a crowd of people were gathering outside a church. We passed a building from which a familiar noise came to my ears, the unmistakable noise of a swimming pool, and a feint whiff of chlorine. We picked up a prepared Paella mix from a tiny Supermarket, were the locals looked at us like beings from another world. We bought fresh milk for Amanda from a street vending machine, having bought a litre bottle for it to be dispensed into from another vending machine adjacent, and then we wandered back to the van to eat and then get our heads down. 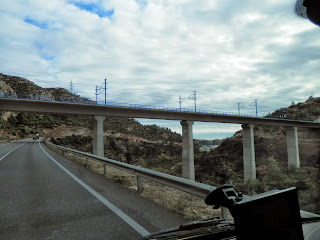 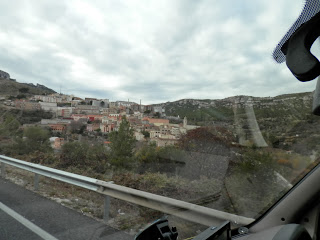 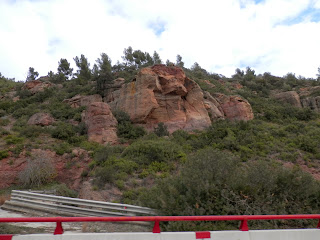 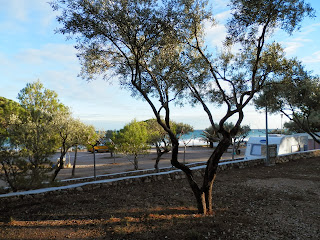 Beside us in the car park Aire were two other Motorhomes, both bearing British plates, we didn’t see the occupants. By the time we got ourselves together the following morning both were gone. Though to be fair to us, we also made an earlier start, being on the road around 9am local time. We filled up with diesel at a filling station I’d spotted the night before, and then we hit the toll road again, for another 231 miles, through more grape and later more fruit almost exclusively as we came down slowly from the plateau. 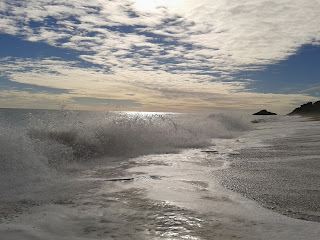 Around fifty miles from the end of the mad dash, the landscape changed as the plain started to descend to the sea properly (though the cliffs behind us are still at least 900ft tall, maybe 1200ft at the highest).

From barren seeming monoculture interspersed by rocky uncultivated plain, we started to see at first scrub, then trees ... those familiar with Spain’s Costa’s and Islands will picture a landscape and it’s trees ... that’s the one we were descending into. I noticed the Moho’s Engine noise had changed to a purr rather than a low growl. I checked my watches barometer and air pressure was back above a 1000millibar, and all the long straight sections of road seemed to be inclining down, some of them steeply, with a requirement for low gears. And then all of a sudden we came upon civilisation, cars and lorries again, intersections, bridges, viaducts, a huge refinery of some kind, railway lines and precipitous drops away from the road, and bends and switchbacks .. thankfully fenced in, giving one the psychological edge one needs to avoid straying into the lane of oncoming traffic on the opposite side of the road. 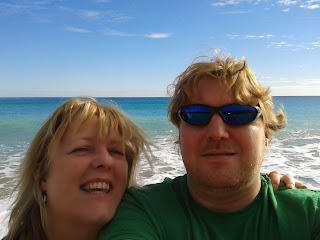 And finally we’d dropped to maybe only 300 feet above sea level, the gantry cranes of Tarragona visible above unseen docks a few miles to our east, some other heavy industry adjacent. We drove around the outskirts of Tarragona towards Hospitalet Del Infante and our final destination for now. A near empty campsite, with rolling surf when air pressure is low and that jaw dropping Mediterranean blue when calm descends again.
It’s Christmas day as I write this. Earlier the German contingent of motorhomers left on mass, leaving us and maybe five other units, to the grey day with huge rolling waves; miniatures of those you see on surfer beaches, but no less dramatic or exciting for that. 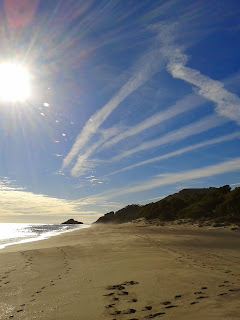 We will do as near to a traditional English Christmas dinner, including Sprouts for later today, nod to our remaining neighbours, feed our myriad feathered friends and walk the beach. 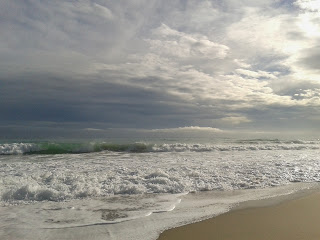 For some of these things you will have to take our word, because stopping to take pictures wasn’t possible, either because we lacked a hard shoulder to pull over onto, or we were pressed for time in the headlong dash to warmer climes.
Posted by ILTYT_Adventure at 12:37