We arrived in Poblo Nou Del Delta around Midday 27th December, all trace of the storm of Boxing Day night had finally gone ... interestingly the guy who owns/manages the bar at the Delta spoke about how powerful the winds had been up the coast. So it turns out it was a particularly strong one this year. However it is a seasonal thing, like we have autumn gales, Tarragona has this Katabatic winds thing. Also worth mentioning, because I left it out of the post regarding the journey across the high plains, that the high plains are poked with literally thousands of wind turbines, and they do in actual fact ruin the view here and there. 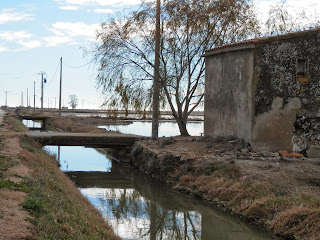 The Delta has been archeologically analysed to produce a map of its creation. It’s around 2000 years old and not much more and created by out-flowing silt from the River/Rio L'Ebro which runs down from the plateau a few miles inland (we crossed the river on the way in to the delta, the problem is that you can’t stop on the bridge or either side to take pictures). However in the overall scheme of things this matters little. The L Ebro is connected to several other rivers naturally and by canals running across the plains, almost as far as Bilbao. The whole delta area is now a managed reserve, though its primary function is producing rice, which at the time of writing has been harvested for this year, and the funny tractors with giant bicycle wheels are out ploughing the mud, and the water from the paddies is being drain through a massive system of canals , sluices and aqueducts. 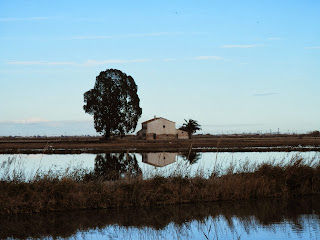 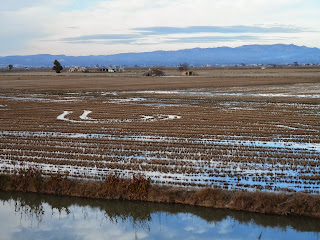 These are European rice paddies, and from the pictures in the bar/restaurant where you pay for services used, rice has been cultivated here for hundreds of years, and in previous years the wildfowl were hunted ... I suddenly find myself wanting Crispy Duck with Plum Sauce. 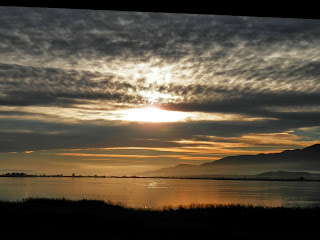 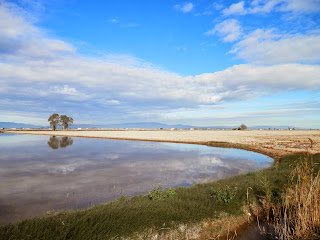 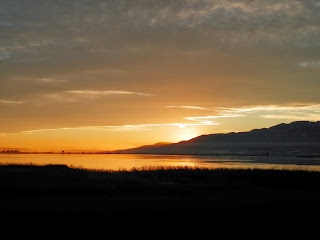 We saw a wild Flamingo, Marsh Harriers, Herons, Bitterns, ducks and all manner of other birds. We also bore witness to yet another spectacular sunset. 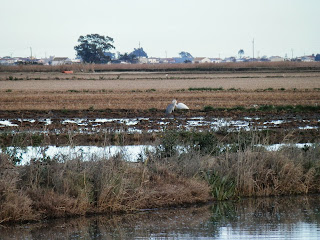 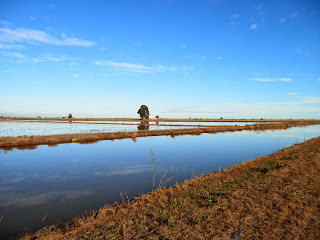 The driving was easy, the place we stopped at was relatively remote. I managed to get two punctures in my bikes rear tyre and my sidekick is suffering from injuries incurred in a near deadly fall into a bottomless pit yesterday evening scrambling on a beach. We have shopped, we are still tired, and we think that we are going to be tired in perpetuity, or at least until we finish, and we think we will finish late autumn next year, because we do feel a bit old and because it’s so easy to spend money, but fuck it, you only live once and we’ll probably never be able to afford to do this again. 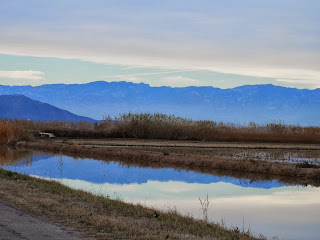 As an addendum, we bought a load of food in to cook in the evening, however the rough night of a day or two ago caught up with us and we revised our menu plans and went to the restaurant that allows overnight parking in this off the beaten track place, to save us the aggravation of cooking, washing up, putting away etc. On the restaurant’s menu was a Duck and Rice soup main course, like really loose Paella, a local dish and extremely filling. We made the beds up before we left so we could just flake out when we got back. We dined in proximity to a French neighbours from our car-park home for the night. And we decided  to go to another fully serviced campsite down the coast for a few days to clear the New Year period, by which time we will have covered a third of the Spanish Mediterranean coast.

We think we need to head inland again after that, there are few ruins to see and many are just not accessible, there are a few monasteries, but they don’t float my boat, so maybe the answer is to see what lies off the beaten track, where grape or citrus rotting on the ground may not be the sole crop, even if it does turn out to be jaw dropping landscape.
Posted by ILTYT_Adventure at 12:46