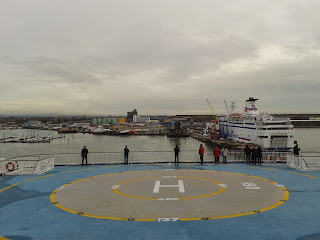 Well we crossed the Bay of Biscay, ate onboard ship in the best restaurant (and for someone who knows Seasickness as well as I do, I slept like log). I’ve been to the sea before, a week here and a week there inshore on the border between swell and waves, SCUBA diving along the South Coast from Plymouth west. Seasickness accompanied me on almost all occasions (if you haven’t been seasick you can’t understand how ill it makes you feel, or how the thought of jumping overboard is almost preferable to enduring it). This journey across the Ocean was almost blissful, a big boat, a bit wobbly here and there, spacious cabin and all mod cons (except electricity for charging the phone). 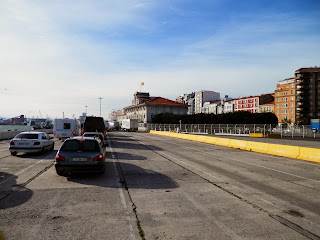 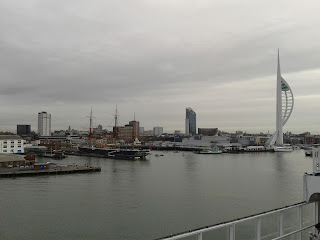 I awoke on the Wednesday morning feeling quite spry ... Amanda was feeling rough, too much vino with dinner. I got dressed and went outside for a walk. The sky had cleared overnight and I slowed my pace down because I wanted to savour the moment when I popped my head around the from the west facing side to the East so I could enjoy the blue sky and risen sun. At that moment it was possible to imagine a world sea and threw a penny in (so that for as long as there is sea over that bit of land, I will have left a mark and a wish, and one impossible day in a future we can’t imaging there is every likelihood that that bit of land beneath the sea will one day be the top of a mountain ... though it could equally be subducted and turned into molten rock). 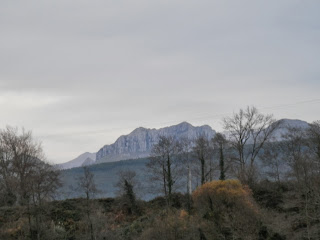 There was no land in sight as there had been once or twice as we tracked around the Brest Peninsula, (lights from shore and lighthouses keeping our mariner host off of the rocks. I walked , around the three decks that are open to the ocean (I should mention I’ve never been on an ocean before, the Maldives doesn’t count they’re Atolls, even if they do rsde in the Indian Ocean) . I stood and looked out across the midnight blue water west and wondered at the vastness of the sea and that there were probably several thousand miles of open water between where I looked out and the next landfall. 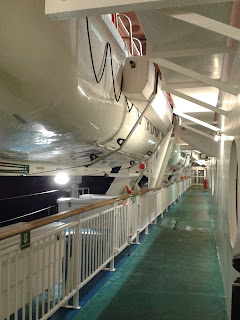 You may have gathered I was a bit excited. 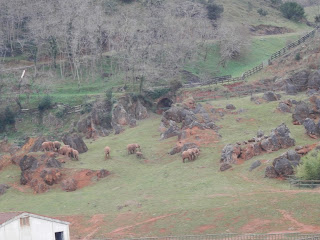 I went back to the cabin and got Amanda up with promises of sun and fresh air, and off we both went again. That bit in the morning, three hours, shower, walk, wonder, breakfast, and finally through my sunglasses noticing that the funny looking clouds down on the horizon, weren’t clouds, but the mountains of northern Spain. Watching the ship plough through the water the mountains losing their ghostly cloud like appearance and solidifying into ... mountains marching west along the coast, ranked backwards from the shore, some verdant and green and others high peaked and white. I had to write it this evening before it was lost. All the fear and angst from the previous days was washed away, because right there in front of us was a beach with someone walking along it, the sun was out and the breeze, though strong was warm, and of course looking at the sun, it appeared just that bit higher in the sky than back in the UK ... dare I say April height. 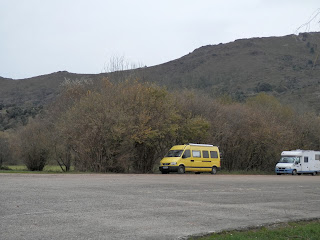 Flying is impersonal, tedious and soulless unless you’re the one dong the flying. In going by sea I’ve discovered a whole new travel medium, there is real tension, a view that develops a landscape that grows.
Once in Santander, I had butterflies, I was worried about making a boo boo on the rod and falling foul of the law or just crashing into something. However the way the port makes you exit, actually prepares you for the road (except left turn across carriageway ... did that one on the real road when the Satnav sent us into the wilderness), there is oncoming traffic, three small roundabouts and parking, which seemed to be where lots of people stopped for the purposes of setting coordinates into SatNavs, including us. 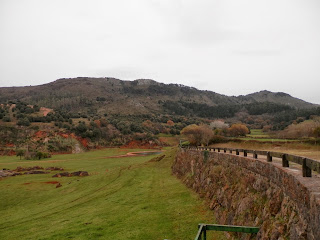 Then we were off on the open road out the port. We picked an Aire thirteen miles out of town `Carbarceno’. It is to all intents and purposes the overspill carpark for a wildlife park. We have Elephants no more than fifty meters to our offside. We are in a bowl of some mountains, and Carbarceno itself is a very pretty traditional Spanish Village of maybe three streets, with four bar come restaurants in its centre and one small shop selling odds and sods of essentials. 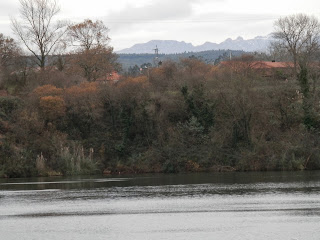 We walked around the town, then went into the only bar that was open and had a beer. We think it may liven up in the evening but we’ll  be in the land of nod for a relatively early start towards Zaragosa and our second stop, before we get to the east coast.

We’d been in the bar for half an hour or so when another English couple turned up. They were in Carbarceno, for an overnight stay before heading back to the UK via Santander and Poole. They told us of snow up near Madrid, and that they had driven eight hours and four hundred miles from Barcelona to reach our Aire. We made small talk, swapped notes on local news and weather and then went back to our respective tin boxes to do dinner. And now Amanda is scanning theAires book, and a map, to find us somewhere to stay for Silly season while I type. It’s 19.15 and we’ll probably be in bed by 20.30, because without hook-up, we need to conserve our battery for lighting, the pump, and if it gets too cold (the daytime warm has been blown away) the fan for the diesel heater. 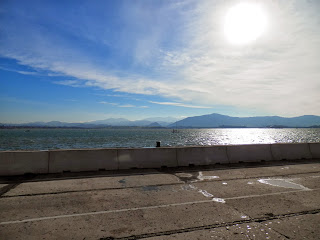 Our jobs tomorrow include getting a tank full of diesel and driving approximately two hundred to two hundred and fifty miles east. 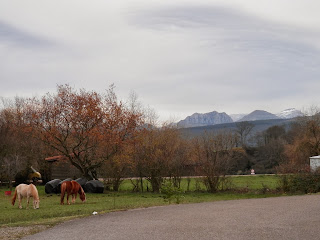