With a bit of careful weather watching, re-engineering of the awning brackets and with thanks to the Essex Harrisons for garage and workbench facilities drills and drill bits (and a roof over our head when I left the van looking like I’d thrown a grenade in and closed the door behind me). We can finally say the awning and bike rack are fitted, sealed tight and secure (the bike rack was relatively easy ... we just needed weather and health).


The awning was a faff and a half. Fiamma either have the wrong panel profiles on record, or there are lots of variations to the actual panels on the vans, or the height and type of rain-seal on the top seam has changed.  Whichever it is; packing pieces, replacing the kits screws, and using oodles of SikaFlex is mandatory, or it will bend/deflect, or allow the roof to leak ... quite frankly for the kind of money you pay for the awning and the bracket kit, I would expect `more’. All these issues could be partially mitigated if one had full height workshop facilities, platform stairs and a warm environment ... or half the cost again to get them fitted in such an environment.
We ended up breaking the job down into four distinct blocks.
For nerds they were:
Day 1 Exposing the inside of the pre-cut and grommeted holes in the roof (cutting lining and internal ply ... should have fitted the awning before the conversion ... 20/20 hindsight and all that). Cleaning and abrading internal and external surfaces to allow Sikaflex adhesion. Laying out the parts, and testing for size, and then finding the inconsistencies ... and realising that the two hour job will be no such thing, giving up and going indoors, and then standing before mirror giving oneself a slap for thinking the instructions and apparent simplicity were a given.
Day 2 building up the awning to roof bracket external profile using an industrial lino (usually found on train floors) and Sikaflex 512, because the brackets were two thirds cantilevered over the side of the van, with only 6mm neoprene and self tapers to secure them. The self tapers  were short of the mark by 1mm, because the rain seal is so high relative to the groove in the bracket it’s supposed to live in (however I’ve looked at a lot of these vans, and those panels and seals are the same `by eye’ on all I’ve seen). If further proof that the brackets are the weak link was needed; none of the brackets fully extend inwards across the full width of the accessory attachment points on the van (that’s towards the centre of the van). That equates to a strip of aluminium missing 10mm x 290mm x 3mm (by design), which as noted above is fuck all material for a lot of money in real terms.
Day 3 fitting the packed and pre-drilled brackets, bedding them to the roof with Sikaflex as prescribed in the supplied instructions (effectively you're making up the missing width in the brackets with super mastic). Lets just say right now that Sikaflex is an amazing adhesive, and you have to use it all the way through the awning install, it just irks me that to allow full cover of the brackets margin and accessory attachment points you have to allow an additional bead at least 5mm wide. Nipping up all the securing screws and plates with the awning in place to align the brackets (which in my humble opinion should be a full length bracket rail, wider than the accessory holes running the length of the roof, this would require an additional 300ml of Sikaflax to bed, but to be fair that’s peanuts for the additional ease of fix). Leaving the Sikaflex to cure over night with the brackets now aligned.
Finally on the fourth day. Remove the awning from the now set brackets, drill the van panels through the packed side of the bracket (the cantilevered bit that’s carrying 2/3rds of the 25kilo weight) sealing and sticking with more Sikaflax, refitting the awning, security plates and final drilling and fitting of security retaining screws (back of the awning case).
All that’s left to be done now is nip up the nuts after a few hundred miles.
As above, in a workshop this is a half day job for two blokes (it’s heavy to lift on and off), and if they can’t expose the pre-cut roof holes they use retained bolts through the accessory attachment points and oodles of Sikaflex. However it’s never as solid as fitting the internal brackets which are made of steel and cantilever the opposite way to the external brackets.
I’ll drop in the profile drawing, so you can see what Fiamma says it should look like in an ideal situation. 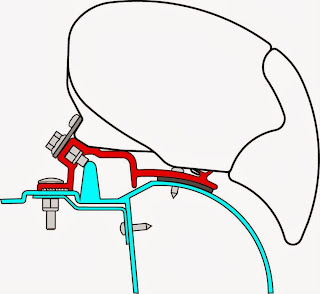