There’s not a lot more to say about the days parked at Home Farm Campsite. It was wet, we were knackered and we think that four days in one place is possibly too long. We covered the same ground with being in one lace too long once before. For information: the place was the New Forest, fully off grid, no Hook-up, no site facilities. It was a great retreat for watching nature, we saw a Tree Creeper do its stuff literally four feet in front of us, and Woodpeckers doing Woodpecker stuff ten feet above our heads). However our friends went home after their weeks holiday and we’d ridden or walked all of the local rides or paths (without de-camping and driving anywhere else). The gloom under the pines became oppressive, and we got bored, plain and simple. We should have cut our losses and left, with two days still paid for, but hay ho you live and learn. Once we’d left the New forest and got to Charmouth the atmosphere changed entirely, we had sun, warmth, electricity and all mod-cons (read as local pubs) and would have stayed indefinitely as long as the weather stayed fine. 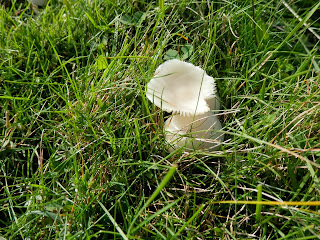 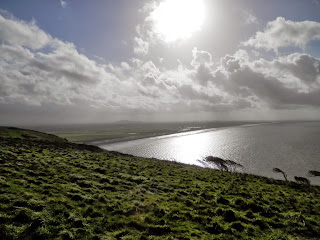 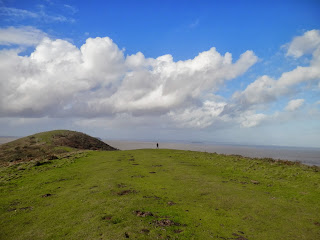 Home Farm had a lot going for it in terms of its own facilities, the Spa, Bar, big pitches with hard standing, very clean showers and loos, launderette ect. It was convenient for access to Burnham on Sea and Brent Knoll, and had we not had a minor issue with a door ... ahem ... we could have driven off to some further afield attractions, but we stayed too long regardless. Unless a place has lots to explore on foot or on your doorstep, and public transport links, then two nights is enough, for a re-charge, exploration and a bit of maintenance. 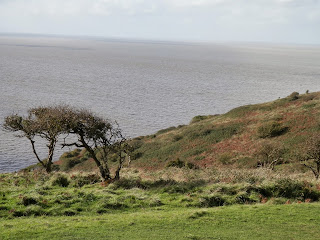 When we did finally leave on Friday afternoon, we went to Brean Down, we think almost five years to the day, since  we went first time as a couple (likewise our walk to the top of Brent Knoll). It’s technically our anniversary week, we both forgot the exact date so we created an arbitrary day; the third Friday of October ... works for us. Always a Friday. What’s not to like? 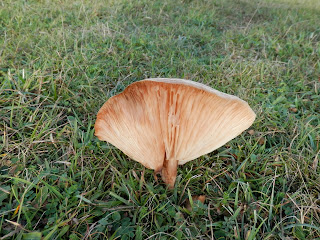 Brean Down is fabulous, I won’t describe it, go see it for yourself or look at the Wikipedia link in the previous post. What I will describe is watching three scythe winged hawks (unidentified birds of prey), balanced in a roaring updraft, somehow perfectly poised so that the wind which was powerful enough to destabilise my walking on a gradient, held them dead steady fifty feet below where we walked. I was hypnotised, by them. I’d thought they were gulls when I first saw them, but the wing profile was all wrong. They hovered in the wind that runs unimpeded up the Bristol Channel, stirred briefly by the ridge of the Quantocks, before running flat across the estuary again into the near vertical south face of Brean Down. The entire body of air crashes into the wall of rock and gets compressed and turbo charged vertically, step back from the edge fifteen to twenty feet and there’s barely a breeze. But there in the torrent of air, are these three tiny lightweight predators of the sky, moving neither up or down, their flight surfaces twitching to maximise gravities down-force against the might of the wind ...  until eventually with the tip of a wing they leisurely banked and dove down the cliff face and out of site. Watching that seeming effortless display of aerial control, just made you want to be a bird of prey, even if only for an hour. 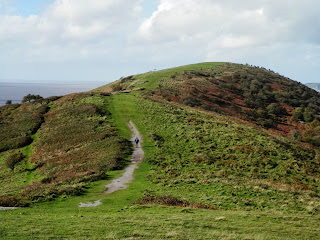 The nerd in me would love to have lit a flare at the foot of the cliff to see how the smoke was propelled upwards and at what point the battering ram of air being driven upwards was itself scythed flat by the main body of air running level from the far side of the bay ... I guess I’ll just have to use my imagination. 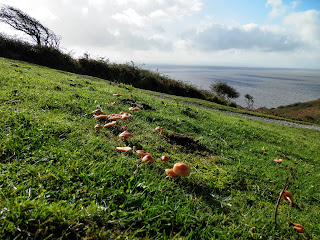 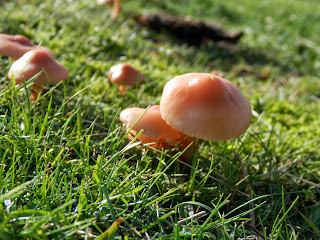 Watching the hawks display was the first of two spectacular avian acrobatic events of the day. On the walk back down of the hill I stopped to watch from six to nine crows perform a synchronised series of swoops, looping soars and dives in a niche of vertical bare rock the height of the cliff, that stands adjacent to the cliff-stairs that take you from the beach to the top the steep way. Crows appeared to join the display, then drop out and loop or hover before re-joining the central display team. 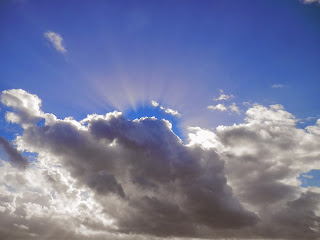 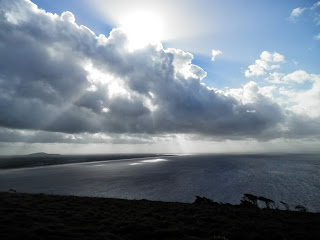 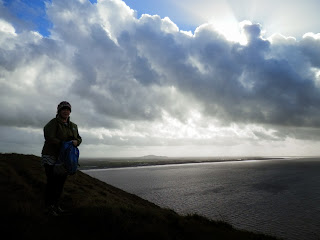 As I watched, I wondered why they were doing what they were doing? It had no point that I could see, they were a small flock being joined here and there by other crows resident to the area ... a flying parliament, up, down, around fast in the sheering updraft, and then looping out of the wind away from the cliff to fall in a dive, before re-joining the wind at the foot of the cliff, like surfers in the sea, or kids looping round, up and down on a slide ... I concluded that there was no point to it. They were just playing with the wind, it didn’t feed them, it’s not breeding season, there were no winners or losers, and all of a sudden as if one of them shouted time out, they just felt out their synchronised swim in the air and fell as a body to one particular telegraph pole, for a preen and a squawk. 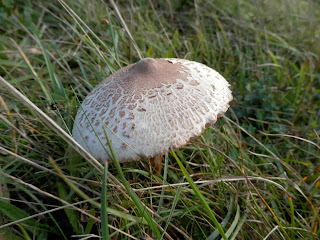 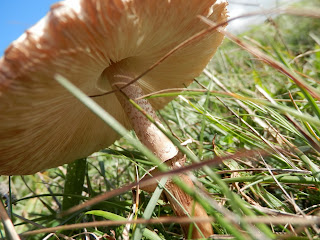 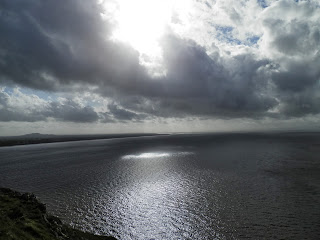 It’s mushroom season. Given the harshness of the environment, and the exposure of the down, I’ve never seen so many species in fruit all in one place. In a wood I’d expect to see them, which demonstrates a lack of imagining and logic, and a subsequent learning. When you think about it, fungi fruiting at this time of year, releasing spores into the wind described above, being flung high into the sky and carried elsewhere ... It’s logical. A goat and cattle grazed cliff will have fungi, and it follows that fungal spores would have been driven in amongst the grass, brambles and bracken to create colonies that in turn seed the wind. I have no names for them, but Amanda has taken some great pictures. 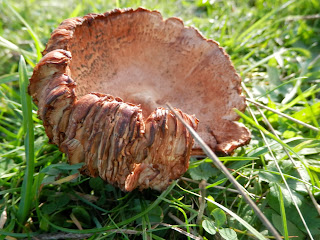 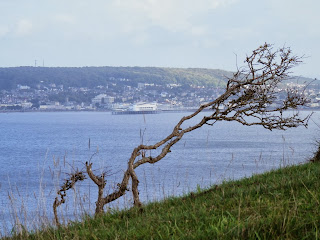 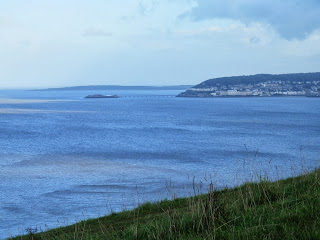 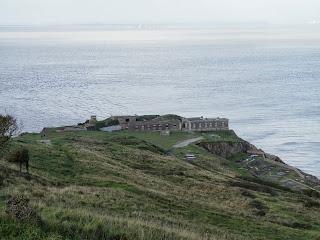 We finished our walk on the easy path down, and strolled back to the van, had a brew and a roll. We scanned through Amandas Photos, some of which are dotted through this post (Brean’s one of those places that doesn’t do bad pictures,  that said Amanda has done it proud). After the late lunch, Amanda did Facebook ... very important for staying abreast of civilisation. I took a forty minute twilighting nap as I like to call it. It's the the place between REM and awake; the fuzzy area where the brain surfs the edge of dreamland, while being alive to the nearby sound of a child being ushered into a car by parents eager to be inside before a high velocity shower pummels them wet, or the squeal of a gate pulls you close to the surface world of consciousness for a few moments, before one try's to catch the tail of the ethereal dream stuff, that may have meant something if it hadn’t been disturbed, by fingers of noise being drawn through strands of dream smoke, breaking the tendrils and creating eddies. 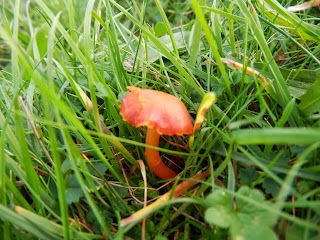 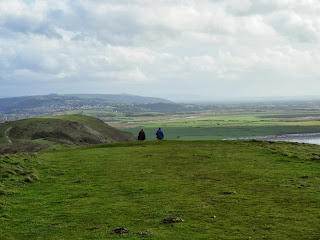 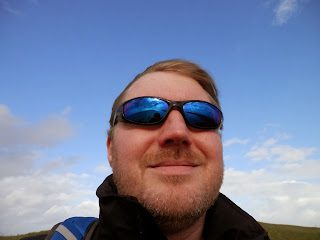 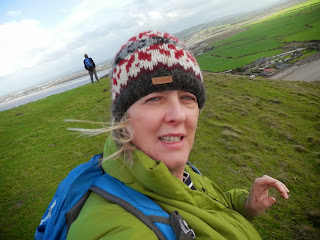 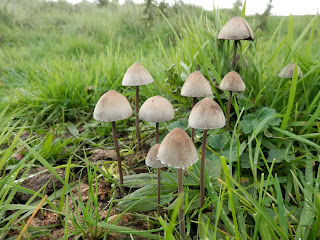 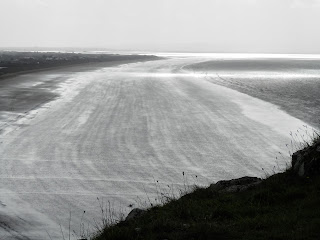 We rolled out of Brean around 4pm, taking back roads across the levels towards Rooksbridge to spend some time with the Somerset Harrisons. We’ve been here for three nights now. We’re waiting for the super storm to pass. 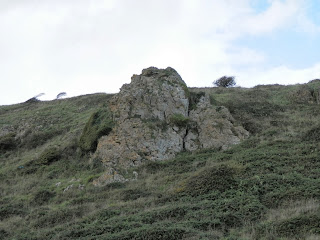 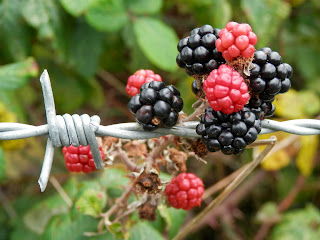 Email ThisBlogThis!Share to TwitterShare to FacebookShare to Pinterest
Labels: Brean Down