On Saturday morning the alarm went off at 4am. The reason for waking up at this antisocial hour on the weekend was to ensure that we were out of the house for 5am. We needed to be out the house and on the road for 5am because I didn’t fancy a six and three quarter hour drive to Honiton. I wanted the leisurely 3.5 hours the TomTom estimates. If you are up at 4am, I can confirm that 3.5 hours, with two breaks to “let water”, is enough to get you the 210 miles door to door and the A303 is a pleasure like the Grey Havens from Tolkien’s Lord Of The Rings, the doorway into the West across the sundering seas (though obviously the seas in this case are rolling fields of gold and green). The roadwork’s at Stonehenge become an utter irrelevance (but for the fact that the problematic right fork is now a soon to be turfed over scar where he old road has been ripped up and carted away ... and I used to quite like that route across Salisbury Plain ... however that is small beer compared to the advantage of the change both to Stonehenge and those trapped in the purgatory of trying to turn right across the plain when it’s busy, turn left off the plain to go west when it’s busy, or turn right off the plain to go east when it’s busy ... in essence if you needed (past tense the options gone)  to do anything but go straight east or west at Stonehenge you were fucked). The road works at the M25/M26 merge at Sevenoaks becomes a pootle through a civil infrastructure works exhibit with real diggers and men in orange monkey suits doing big stuff with big machines and lots of neatly spaced cones, and the M3 is that odd corridor (to me anyway) that speaks of heath and true forest to come further south in Hampshire and the New Forest itself, the M3 is the pre-amble lined with  gorse and pines and heather and grass and absolute change of landscape from the familiar to me Kent, Essex and Northeast Surrey.


The upshot of all this joyful babble about the ease of passage into the west, if you’re willing to wake with the dawn chorus is, that we went to see the progress on the motorhome at Paul’s invitation stroke order and to make some final fit decisions. As ever pictures speak a thousand words, so I’ll take a course of shut up tablets and post the pictures instead, and round off with a summary in a bit. 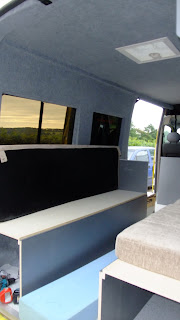 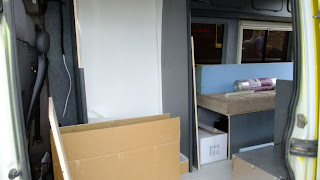 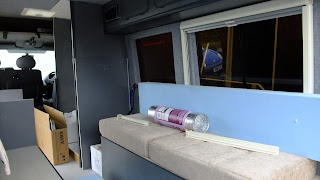 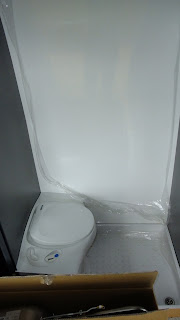 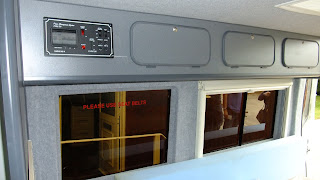 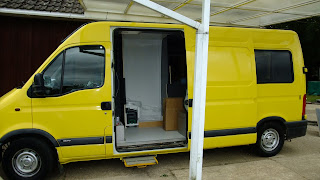 Summary. The moho has been lined, and the insulation finished underneath the ply, Paul was as unimpressed with the previous fit out as I was. I think in fairness the expression “horses for courses” fit’s. It needed to be fairly quiet and fairly warm and as an ambulance I’m sure it was. New skylights have been fitted. The bench seating is just mocked up for now. The background services (gas, electricity and water) are routed or have conduits to allow final fit. The upper cupboards are almost the finished article. One must admit the there is a lot of grey, however as with white rooms we shall add the touches of colour that make it home.
A fifth window will be added into the sliding door, the rear windows slide open so if it rains they need to be closed. The window in the sliding door hinges out and will be right by the hob and cooker, ensuring Carbon Monoxide doesn’t become a problem in foul weather. The shower room is large with the loo and the shower tray forming as big a space as they can for freedom of movement, because there are three primary functions for this bus, outside of being transport, and they are if I’ve never mentioned them before:
1.       Eat


Almost everything else, if not everything else is support for these three functions. For me the comfort comes in simplicity, ease of access, low maintenance.
We are not going to be one of the plush luxury land yachts that the high end builders stuff full of crap you don’t want to get dirty, or be overloaded with time saving gadgets ... that save you time to do “what”? exactly, you’re on fucking holiday. You’ve been programmed to think you need an in-built electric can opener, two sinks, satellite TV and  a Corby Trouser press ... alright I made up the Corby trouser press. But seriously some of the crap you see in high end motorhomes is just (in the narrators humble opinion) there for effect. And by blows, fritters your valuable diesel money away. This said, having stuck our heads in a high end unit at a motorhome show, and finding it just a bit too beige, and turning our noses up, we found ourselves being remonstrated with by some old duffer who was practically “knocking one out” with glee at all the shiny doodads and what knots in said exhibition motorhome ... each to his own ... a good job the covers were machine washable.
For me if you’ve had to make a double bed four feet wide, with one side cut off at an angle just below one poor sleepers knees, then you have tried to fit too much in and made a pigs ear of it ... or you’re catering to very thin people one of whom is very short ...

So that’s it for now, we visited some good friends after our trip to Pauls', drank some beer, went to a splendid Italian restaurant in Burnham on Sea, slept over at said friends house, had a splendid breakfast and talked about our travel plans and options and then spent five hours coming back along the M5, M4, M25, A12, A130, A127 (to within 100yds of our current front door) ... redeeming features of these roads .... er um er, well they are roads, we’d be buggered without them. I think we totted up five hours on the return, weight of traffic, rubber necking fucking morons, and middle lane drivers (one of those three is my personal pet hate, and I shall be ever so glad to avoid motorways when we hit the road properly).
Posted by ILTYT_Adventure at 10:39