We are coming up to the target date for leaving on our grand tour; 21st March 2013 ... which by my calculations was supposed to be today. Best laid plans of mice and men and all that. It’s over a year since our first post and nearly a year we’ve had this date in mind. Who could have known what slog it would have been ... and some may say “all to nought”. My analogy is Snakes and Ladders, we got to No 98 and had to drop all the way back to the mid thirties. I say mid thirties, not zero or one, because you have to include all of the process that got you to the point where you were ready to “go a travelling”. If it was as simple as getting in your vehicle and driving off into the sunset, we would have been celebrating the anniversary of setting off, and our first year on the roads about now. There are two things barring our way forward at the moment ... albeit ... substantial hurdles on their own: The house hasn’t sold (but we got to enjoy all our labours all winter long), and the big one: we haven’t got a working motor home right now ... but we have that in hand. 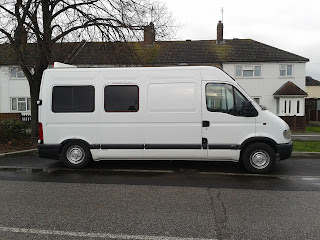 Below are some more pictures of Mk2. I’ve already binned the seats from the rear. I was going to try them on Ebay, but then I decided to check Ebay to see how well they sold given their provenance ... it’s a spade is a spade moment ... to whit the seats are possibly piss smelling, bacteria ridden arse breakers that go on Ebay for .99p and then sit there without even a watch for the next ten days. I have no sense of smell so I couldn’t tell about the Pee smell, however I did do the release mechanisms to get the seats out, and after loosening the first one, I retreated to the bathroom for a hand wash and nitrile gloves. Cleary they’ve been cleaned as have the floors, after all it’s an ambulance, but once you’re in the grooves on the floor that the seats lock into, and scales that were small, become perceptively bigger, those clumps of hair and gritty crud in the dark crevices at the very bases of the seats become phage ridden bacteria swarms looking for a new kind of host to infect ... and that’s how Zombie apocalypses start. So the seats went to the dump where all the other phages live and die in a microscopic war of attrition that doesn’t usually result in Zombieapocalypsitis.
Having taken the old seats to the dump, I went in with the big gun ... that’s right total war scorched Earth Armageddon on dirt ... sounds exciting, in laymen’s terms ... hot Domestos on a traditional mop head. Never mind all that thixotropic sticks to the rim even after you’ve flushed shit shit ... what you need to weaponize bleach is hot water and a raggedy mop, followed by some deft footwork and plenty of foam. Needless to say, the water came out black, and my only regret was not wearing a facemask when I was down in the pube knotted micro world of sick or injured people’s faecal matter and bacteria ... possibly. 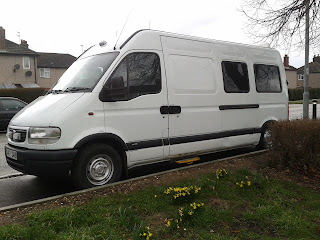 So today 21st of March 2013, instead of driving off into the sunset, I’m instead going to go back in, to remove: plastic plates that tell you how to release the seats, a laerdal suction unit mount, clips and tubes that used to pass oxygen from one end to the other, and hopefully the wheelchair access mount (I say hopefully because it’s a big lump of metal held on with many bolts that have been worn so that the bolts may be difficult to hold with a spanner). I’m also going to remove one main ply panel to see what state the insulation is in. Once the insulation is inspected I’ll make a decision about replacing it, augmenting it or just leaving it alone. 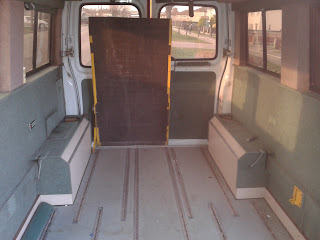 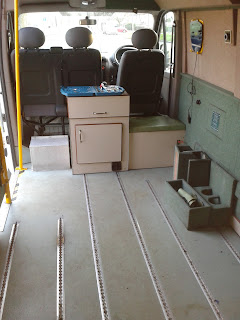 On Monday I’m driving it to our usual mechanics, Benchsound in Stanford Le Hope, Essex (www.benchsound.co.uk) for a full service and a Cam Belt change (the first painful bill). I said in the last post that the unit had been well serviced and that it had a lot of service history which I read more thoroughly on Monday, Timing and Cam Belts have been changed previously as have brake pads, wiper blades, oils, coolant etc. However in amongst the lines of service history I did find one thing that concerned me a little, that I didn’t spot on the first run through; at around 200k miles it had a new cylinder head. There are two ways of looking at that; it’s had a new cylinder head that is 100k miles younger than the rest of the vehicle (this is a good thing), or it’s had a new cylinder head how are the pistons and rings? (That may not be such a good thing). However one has to look at the positives. Were the unit to require a full recon, the head should be pretty sound, with new belts and the frosty eye of the guys at Benchsound we should know by Monday Evening if we’ve “bought a pup” (http://en.wikipedia.org/wiki/Pig_in_a_poke for those interested in the origins of that particular idiom ... clearly I was J ).
More later.
Posted by ILTYT_Adventure at 05:19