You Couldn't Make it up

Well here it is 2013. We haven’t posted for a couple of weeks. So happy New Year reader.
Now to business; things are difficult. You may be thinking straight away “cold feet”. You’d be right it’s been cold, and at this time of year the thought of going off travelling seems a thousand years away. However things are awry with our plan in ways that are almost impossible to comprehend or believe.
We are in the land of “you couldn’t make it up”. On Saturday morning January 19th 2013 (at around 3am to be precise), a stolen vehicle driven by a drunk driver, plus a passenger lost control of their stolen Ford Ka and ploughed into the rear offside of the motorhome. Yes you read that right. Pictures below. 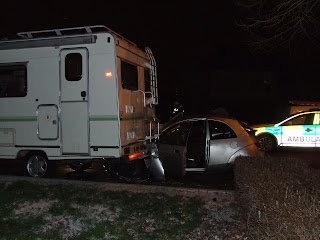 I haven’t written it up before now because we’ve been playing the waiting game with the insurance company ... thus far they have been awkward. And I’m only forgiving them because of the severe weather and the volume of snow related incidents they are dealing with. 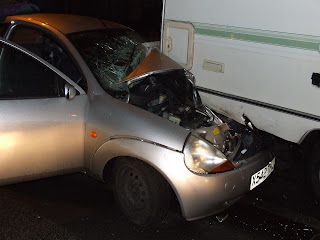 We are in total limbo, the damage to the rear underside of the chassis is extensive, however the entire rear extension to the chassis that supports the habitation unit drops off with fourteen bolts. The lighting cluster is made of fibreglass and is a bolt on unit as is the Safe T Bar, which is another extension to the chassis extension, and includes the tow hook. There is no damage to the floor, the gas system, new toilet, kitchen, plumbing or shower. So that’s all within certain parameters repairable or replaceable dependent on availability of parts ... and we know a man who breaks them www.no1gear.com mentioned variously elsewhere. 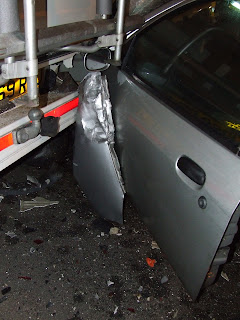 The rear may not be the problem. It’s the front that’s the bone of contention. Our vehicle was forced forward some eight feet, but of course our neighbours car was parked just three or four feet in front of the motorhome and they like us being keen campers have a tow hook. Our front bumper was cleaved in two like an Orcs head before the Axe of Gimli. This has resulted in a significant creased ding in the main front chassis cross member. This cross member supports the radiator and all its paraphernalia. I once wrecked a Smart Roadster and know that the chassis will, with a little heat pull out (none of the radiator parts or fans are damaged), but the ding is deep. On the nearside where the suspension leg bubble/bulkhead rises from the main monocoque of the cab, there is a split in the skin. The split may just be sound proofing but I think it’s the metal (I’m not an engineer I can’t be sure). The split may be weldable, however it does speak of lateral shock to the front suspension leg and the steering gear that links in down there below. 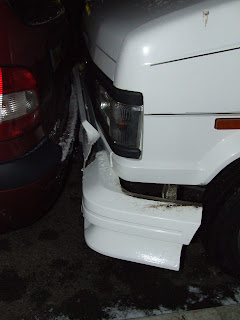 And now we come to not knowing what’s going on. The severe weather means that Direct Line is swamped with claims for all sorts, all their assessors are busy, and our vehicle hasn’t even been looked at yet, in spite of a number of calls to move things along. So we have no idea whether they will write it off or repair it. In our motorhomes favour, is the fact that it’s in very good nick all round, and has been renovated internally, and the fact that it is a “no fault claim” and all repairs will be covered . Against it is its age and the expertise of the person doing the assessing. 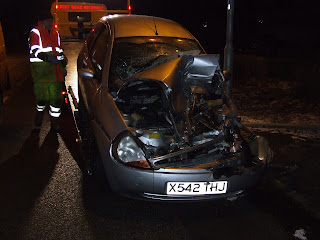 Aside from this the police have not compiled a report yet as the RTC status of the incident is likely to become a criminal matter due to a list of motoring offences as long as your arm committed by the driver and passenger. 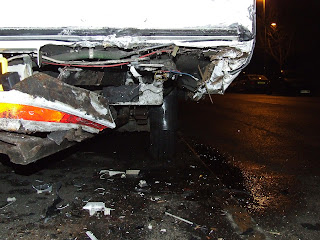 Aside from our own problems, we were told by the police at the scene that the girl (who may have been driving) was found between two parked cars opposite our home. I must explain that I was wearing earplugs, so while I did hear a bang I didn’t register it as significant. The girl had been dragged from the car by the male person (again we have no further details from the police as to whether he was passenger or not), her injuries include a broken leg, a broken pelvis, a deep cut to the face, and possibly an eye injury. The male realised that the girl couldn’t make it and did the decent thing and abandoned her on the ground, in minus 2.5 degree cold with snow falling. 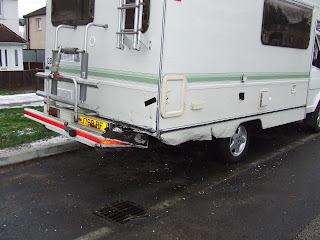 We were not alone in not realising something was up. No one woke up, and the only reason that the girl was saved, was because the Port Of Tilbury Police were doing a drive through the town, round to the cruise terminal, they spotted the vehicle lit but parked oddly and decided to have a closer look.
So there we are, up a gum tree, in limbo, on hold. We’ll post when we have more news. One must say that we have numerous plans in place for every eventuality these will form a separate post.
Posted by ILTYT_Adventure at 12:34