After months of intense work, and a wet non- summer without relief, we finally got to use the motorhome for what it was intended for ... travel to out of the way places, stop a while, muck about on the beach or country paths, cook, eat, ... tiddle in comfort without having to walk to a toilet block 50yards away ... sleep in the buff and get your legover without fear of the occupants of neighbouring tents seeing your silhouettes cast against the skin of the tent from the inside, making the beast with two backs or hearing the two minutes of frantic grunting and rustling associated with such nocturnal activities; I used to camp ... I know these things. ... I’ve seen the mine and another’s shadow cast on the inner flysheet and thought “Oh fuck I hope she doesn’t cotton on to the porno shadow show we’re creating”, and then being a bloke just having a chuckle to myself because getting your legover in public affirms your masculinity and proves your alphaness ... I like to think. 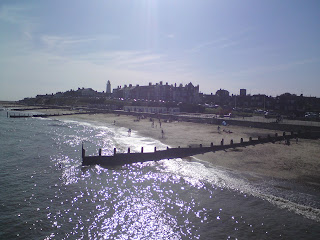 So I’m writing this after a jolly three nights away, having completed several cycle rides (nothing too far ... we found out how out of shape we were) and two short and cold swims in the September sea of Southwold Suffolk ... and one of those was a skinny dip. Walks, cycles and swims were all followed by some of the most expensive beers I’ve ever drunk in a pub or pubs ever. To say the least Southwold is expensive ... I’ve also renamed it Adnamsville, as that particular brewery is bang in the middle of town and appears to own or feed every pub there about. While it is quaint, with the air of such places as Salcombe and Charmouth; to whit, very salty and sailorish with a community that from overheard conversations and interactions “knows its own”... it is relatively speaking, a bit of a rip off. 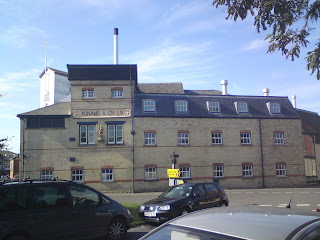 I won’t bang on about it too much, but when a pint of the local brew, brewed less than a hundred yards from the hostelry said brew was consumed in and a large Gin and Tonic roll in at £10.25, you have to have the “I should have bought a slab of supermarket lager and had a beer in the motorhome” thought.
I at once sympathise with the pub industry for having to compete with supermarkets on a very unfair playing field, but on the other hand, looking across all of Southwolds retail sectors, food, clothes, drink ... tiddly whot knots, it’s just shooting itself in the foot. I have no idea what the answer is for the British economy overall; my mind simply can’t juggle that many balls, but from the start of this blog all I see is that sector after sector is fighting against either itself or allied sectors, and subsequently throttling itself with overpricing, or destroying itself with piss poor quality and in piss poor service delivery. There appears to be some form of loop back in the economy ... a Groundhog Day ... as I say I have no answers. I just see myself not going to pubs, because it’s a rip off, not going to hotels, because they are a rip off, only buying stuff that’s on sale or last season, because this year’s prices and models are a rip off, and between times making my own lunch as often as possible ... you guessed it; because a city lunch once, even on the cheap is at least as expensive as doing your own for two days. 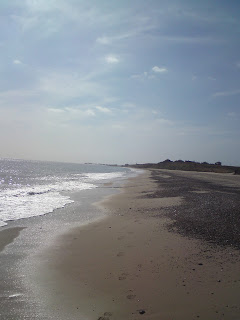 Glossing over the fact that we spent more than seemed right in the Adnamsville pubs and didn’t shop at all for the simply laughable prices (perhaps we are just poor white trash and we weren’t supposed to be there at all ... you never know?). Southwold itself it is quite interesting. I shan’t list all of its history menu, or items of local interest. You can get an idea of what’s about there, here http://www.southwold.info though I will point out a few of our highlights: 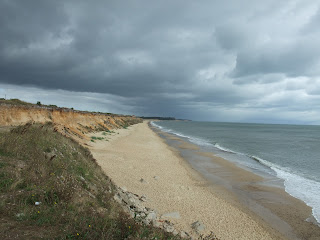 ·         The beach that runs near south to north from Southwold to Lowestoft is simply fabulous. Walking from the river Blyth where the campsite is along, through and beyond the beach holiday haven of the main town pier, amusements, prom, tea huts there is a near deserted strip of sand bordered by low cliffs. The Cliffs are maybe two stories high and fall gently to nearly sea level and a small salt marsh and reed bed three miles up, by which time there isn’t another soul around (hence swimming in the buff rather than walking back in wet clothes ... practical nakedness). The cliffs then rise again to about three stories and are covered with a mix of what looks like deliberate tree planting (big Cedars, and pines) and dead wood (that I imagine was once someone’s pride and joy). But as the cliffs have receded via wave erosion, so the salt air and added wind exposure have done for some of the trees, and some have simply fallen from the cliffs to form drift wood relics ... the size of trees. Heading north along the beach like this and encountering only one or two other people on the way does give you a feel for how close most people stay to town even when they go away. It seems to me that the majority don’t see the point of just going to look at open space and having a nose without having a pre-set destination. You know just going because it’s there to be seen if you just put one foot in front of the other. 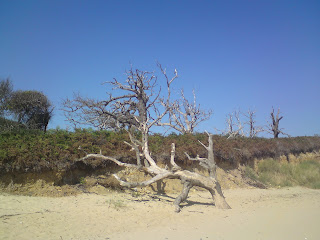 ·         Within the town there is the Seamans Reading Room, a small building fronting the town perched on the cliff looking out to sea, part memorial part museum to the seamen of the area. There are pictures, models and books and written accounts from days of yore. The town has quite some naval and maritime history, the shore has been a wrecker, and once there was a sea battle fought along the coast.  If you pop in make sure you drop in what you can spare in the donations box (likewise at the pier). 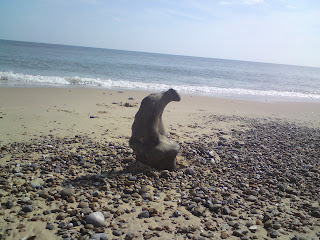 ·         The pier, a short very neat affair with several quality tut shops (that’s an oxymoron I know, but you’ll get it if you go), there’s a novel under the pier show (on top of the pier half way along). It’s a collection of alternative slot machines, a little too complicated to describe, your best bet is to pop along and have a look ... there’s also fishing off the pier with a permit, if you’re interested. 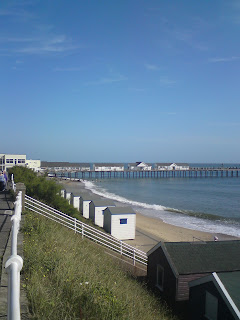 The campsite itself was functional, a little badly organised and laid out and the facilities were suffering from wear and tear (in some respects extremely so), taps being my personal biggest bugbear, because there was only one set of four that would stay on when the button on top was pressed in. The showers and loos were fine within the parameters allowed by being used by several hundred people all day long and most of the night from March to September. We were expecting it, because we read some reviews up front, however the next nearest site was a fair way in land and this was a good compromise. 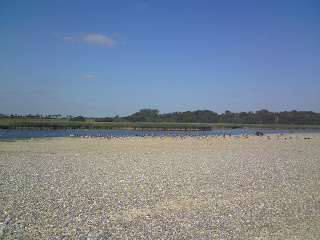 The thing that irks about the campsite is that it’s owned and run by the council, the same council that runs the town, the town that is really expensive and looking for premium customers, the town that if it were run like the campsite, would be on its knees and not having any visitors ... perhaps Adnams should run the campsite ... but then who would be able to afford it? Foot shooting it’s a British national pastime me thinks. 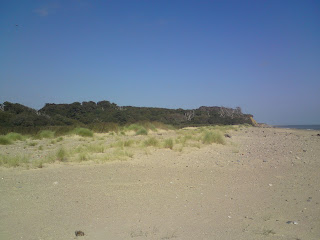 We were a little lazy on this trip with regards to food and provisions and just being prepared. I had several days to get us ready, and yet failed miserably to use the anally retentive laminated lists I prepared to avoid such omissions as I will list below. We brought the absolute basics:  two ready meals I made before we left home, a pre-cooked pork joint from our local Asda, and some cereals and salads. Somehow we managed to forget desert size spoons, sugar, the milk we had in the fridge and bacon and chicken I’d taken out the freezer to thaw on the trip (helps the motorhome fridge cool quicker), we also didn’t pack our small frying pan ... all things being equal we’ve been a bit crap. However it’s not a cause for much stress, I think we’ve both survived with a lot less in similar situations, and I refer to my earlier comments; I’ve slept under canvas so having only one pan (a very good one that never leaves the Moho), plus a bog standard gas kettle and flask for hot water, aligned with all the other creature comforts, pretty much negates our short comings completely. 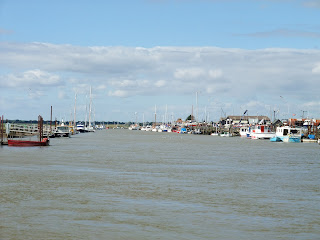 It may look at first glance as if we had a crap time, but the entire opposite is the case, we had a right old hoot, we got half cut with a bloke whose spent half his life in Sizewell B nuclear power station, we walked down an unlit B road with only a head torch for illumination, we swam in the sea, cycled, walked and caught the last of the summers proper sun ... great weekend thanks Shine. 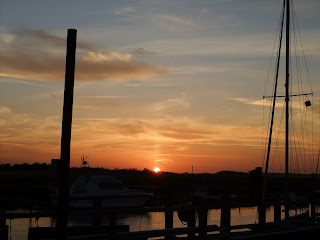