In between rain showers and coats of paint, we’ve had a little time available to do minor jobs in the motorhome. A minor but key job (in the grand scheme of things) was tracing out the remains of the old water system so I can connect the kitchen sink and shower. The kitchen sink will be dual purpose as the face wash and toothbrush sink and the all important washing up sink (when site facilities aren’t available)... I think I mentioned this elsewhere; but to re-cap; by only having the one sink in the kitchen, we save space to manoeuvre in the wetroom, where once there was stupid old style corner sink and cupboard, plus shower, plus toilet... moving swiftly on. The shower connection speaks for itself... we need a shower. 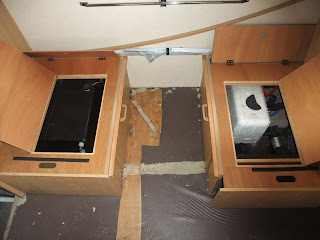 The tracing of pipes isn’t hard, though a little cramped and dark (that’s what head torches are for), and if you’ve ever done plumbing at home, believe me plumbing in a motor home is a joy ... no solder, no flux, no gas burners, no PTFE tape and measuring to millimetre tolerances.. no risk of fire or death when you accidently heat a gas pipe adjacent to a water pipe, and for a second or so everything is very bright and clear...and then very dark for the longest time. No in a motorhome, hot water is in the red flexible plastic pipe and cold water is in the blue flexible plastic pipe (unless you are total nob or a masochist and use clear pipe for everything. Pipes push together on T, Y or straight connectors and are held fast with Jubilee clips, as do the end terminations; being taps or showers. forward of your water heater you have a grit filter, and some main and branch isolating valves.... erm that’s about it for real pipe gotchas, though I’m sure that there are more if I look in the book of words, but the only issue I ever had was air in a pipe, and that’s no great shakes to sort out as long as the water tank is full and you get the priming order right (sounds like a biggy that, but it ain’t).
The bonus from this little tracing job was that I found that the new shower hose’s have their straight connectors bonded on already so I don’t need to purchase any, and as the wetroom previously had two feed pairs (hot and cold) and the kitchen sink only one feed pair, that with a little gentle pulling pressure and then twenty four hours in Milton fluid that I don’t need to buy anymore connectors (unless ours let by...see previous post about the goods available in GoOutdoors). Had I had the time this week I would have already made the connections and done a test fill and flush of the entire system (what with the long hours of light and all); and subsequently declared the Moho ready for business as long as leaks weren’t found. However I am now saving myself for this weekend because of the works in the house.
I’m anticipating having several hours free on Saturday for this momentous piece of work... and connecting the plumbing and dealing with the shower for me is the DIY equivalent of eating a good meal and saving your favourite bit until last, because of the overall simplicity of the system...I was going to make a legover or wanking analogy regards saving this treat for myself, but maybe not everyone would get it, in any event Saturday is a big day.
Posted by ILTYT_Adventure at 10:15