In other news more relevant to the reason for all this DIY, I find myself in the pleasant position of being pre-Olympic and start of school holidays quiet at work. This in turn means I’ve had time to find some stuff out, such as a likely departure port from Turkey to Cyprus. This does still leave a large gap in the plan. The gap being the breadth of Europe...ish, but on the positive side I have an idea where the jump off point to Cyprus is.

I’d like to say I found this gem on my own by trawling through travel companies itineraries or a tramp steamer captain berthed and gone ashore from ye old Tilbury docks, but I would be talking more bollocks than usual and lying to boot. 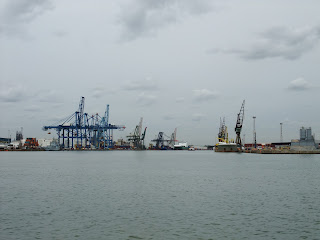 The truth is some several months ago I subscribed to http://www.motorhomefacts.com/ . What can one say; Motorhomefacts is the font of all wisdom. There are other sites dedicated to Motorhome, caravan and camping tours and travel, but by far and away the most international one in English that isn’t C&CC (Caravan and Camping Club) is the one above.... you even have to subscribe and pay money to use it.
I dropped in my question regarding ferries and within 24hours I had five useful responses, including a link direct to this website http://www.turkeytravelplanner.com/trans/Ship/cyprus_ferries.html , once I have confirmed that they are still operating and the vehicle types they can carry  (I have no reason to doubt that they aren’t, or that our Moho is too big, but better safe than sorry) I will pencil in the relative positions on the map and start working backwards from Turkey and across Europe. I then have to find local weather information so we can plan our route around extremes of hot or cold, altitude, sceneicness (that’s a real word you just don’t see it very often), and dodgy bits.
A couple of other gems I’ve picked up from the forums regards pan European travel is the possible limitations of your vehicle insurances in some of the more eastern countries. I haven’t gathered all the information clearly but it appears that standard insurance won’t cover you through Bosnia, and that you have to buy insurance at the border. It also appears anecdotally that there is real insurance at the border and then there is a man in a peaked cap saying give me 100 Euros so you are insured... which apparently isn’t the same thing. And if rumour is correct there is a way of avoiding Bosnia altogether by catching a boat along a bit of coast (more research needed). The insurance tomfoolery reminds me of my younger brothers experience of flying into Minsk with an Embassy note but no visa and finding that the local Russian immigration agents wanted a $120 payment in cash for admin; for a laugh my brother and his Co Pilot played dumb and took the Mickey by offering to pay by company credit card instead, insisting that that was the way they paid ad-hoc fees... needless to say their joke back fired and they were arrested and held until they paid the cash fine, which they knew was totally bogus and just an official on the make.
These little gems of research are vital, you can’t plan for everything, you can’t account for bad luck, and bad people, but you can plan for bad weather, evacuation, mechanical failure etc. Up a few lines I said I didn’t trawl the travel sites to find these nuggets, however I did trawl the forums, so I suppose I have worked on this properly. I’ve just removed the sales person or booking agent twat element from the process (there’s plenty of time to deal with live people and possible half truths further down the line)... everything is easy on paper... (except radiator measurement and mounting instructions).
The light at the end of the tunnel I mentioned in the post below is not just a light we can see in some vague distance; it’s becoming a light we can shine into dark crevices to find our way. A week ago that felt like it was a long way off, but not anymore.
I won’t use the word optimistic; the housing market is flat, money is tight, the end of the world is due on the 21/12/2012, which is coincidently exactly three months prior to our proposed departure date... an apocalypse would rather put the kibosh on things. So no; not entirely optimistic but I feel I’ve opened the research door properly. We are by no means the first people to undertake this adventure, and I guess a seasoned campaigner would look at this blog and think “bloody amateur s”. Hopefully though I can pick that seasoned campaigners brains and make our adventure all we hope it will be.
Posted by ILTYT_Adventure at 04:02