Our Future Homes Makeover. When is Too Old?

In other news we got the gas and electricity (12v) on the motorhome sorted, I make it sound like small beer but it's a massive change and from here on in we can use the motorhome  again (when of course we finish the damp works at home). As I’ve said elsewhere it’s frustrating; I could never be accused of being patient at the best of times even less so when the motor home is now ready to go. The gas works were actually more complicated and extensive than we anticipated, and after some haggling and procrastinating we decided to have all of the old pipe stripped and replaced, and a new manifold installed, as well as the bulkhead regulator that we had already purchased. 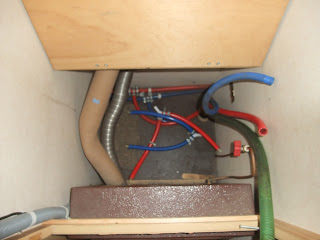 We also bit the bullet while the unit was in having the gas done and had the mains connected charger fitted. This allows the leisure battery to charge while the motorhome is on mains hook up. To explain: Motorhomes have a relay from the alternator to the leisure battery, so once the vehicles battery is charged the leisure battery gets charged as you are in motion, it’s a neat and simple solution, that allows something as simple as the fridge to chill down while you are on-route. The new charger augments this facility by allowing the 12volt systems to fully charge while you still get the use of your mains systems on a mains hook up at a campsite. Our motorhome is so old it didn’t come with the charger in the original build, so we were going to install one at some point this year. However with the delays from the damp works at home, it just ended up as another “to do” with an ever shrinking timeline. Fitting the charger is relatively simple, and both my brother and his best mate are Mechanical and Electrical Engineers (sparks with spanners... though in fairness to both they aren’t on the tools anymore, in fact my brother now flies private jets for rich people who don’t like mixing with the hoi polloi). So we did have an option on buying the charger and accoutrements and then doing the work ourselves... but... as the gas fitter was going to be in exactly the same space as the electrical work, it seemed pointless waiting, and of course the “to do” list shrinks by one item and what we lose in cash for labour we gain back in time elsewhere for ourselves and simple things like: Route Planning, which I scribbled about a post or so ago.
If nothing else we have learned a little more about compromise and managing our own expectations. And unpopular as it may be... it is fair to say our only friend during this period has been the miserable weather everyone else has been complaining about. The rain has kept us indoors, out of the garden, and with no distracting sunny days beckoning us to the outdoors. The short respites from the rains have fortunately fallen in slack periods at home allowing us to just keep on top of the garden, with a few motorhome cosmetic jobs of our own sorted out, just on top of the day to day stuff of work and home. And referring up a line or two; staying away from sunny days out by default means that we haven’t pushed our physical limits even further than they have already been pushed. We aren’t builders; using a hammer and bolster relentlessly for four hours isn’t our trade, nor is mixing two and a bit tonnes of sand and cement (even with a mixer). We are both now the mature side of forty five. And we are possibly the only people (except farmers and water company executives) that are happy about the progress of summer weather 2012 so far... I don’t think I’ve been so physically and mentally worn out ever... and yet knowing myself, if I found clear skies to play under I would invariably push myself and Amanda to get out and do stuff.

Last year I on this very day 20th June I had my Lumbar L5/S1 vertebrae fused, I spent three months in recovery, and I guess the whole of the rest of last year and the first few months of this year getting back in shape. During this period I was lucky enough to be put on a pilot Physio program at UCLH and over the course of ten weeks I found and was encouraged to push my boundaries and get back to the sort of fitness that meant that in 2004 I could coast a London Bikathon, swim five days a week, and run fifteen miles in that same week (I couldn’t even imagine doing it now, I don’t think I’m that needy anymore either)... But the point is during the physio course “pace” was emphasised “pace”, not overdoing it, being mindful of your condition. I’m rubbish at pace I just don’t have the right kind of off button... and Amanda is very much the same at heart. If there had been sun this last two months the situation would be:
1.      Two dead middle aged people who took on too much... but did die trying
or
2.      A damp house and travel plans put off for a year or whenever J
What we have instead is... two considerably poorer middle aged people, but with enough gumption remaining to get to the finish line even if we only get the wooden spoon.
Posted by ILTYT_Adventure at 13:56