Amanda and I spent the whole of jubilee week digging out then moving four tonnes of damp rubble from our dinning room extension. It has been without the doubt hardest work I’ve done in years, Amanda says it’s the hardest work she’s ever done. The last time I worked that hard was ten years ago, on a voluntary project near Broadwater farm in Tottenham… how easy it is to forget back breaking labour,  and how easy it is to think it was only yesterday and I’m still as able as I was back then. 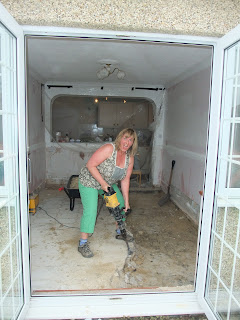 We had some minor delays on materials being delivered, one major delay for a cement mixer delivery from HSS, who as a company I’ve always found pretty sound, but on this occasion were let down by a total nob of a driver who turned up three and a half hours late on the Friday before the builder was expected.

In any event the heavy work was complete by Sunday early pm 10th of June. That included the break up and removal of the screed, bagging up and shifting to the dump same broken up screed (eighteen trips). You ask why not use a skip? I say try getting a skip same day or next day in Thurrock. This was followed by tanking with the most noxious bitumen paint, two coats seperated by twenty four hours (it still smells two weeks later, but the final plastering should eventually see off the smell for good), re-lining with DPM and then mixing and laying the new screed over the insulation. We even found time to find the new flooring and get it home, though it will be at least another week from posting before I can lay it. 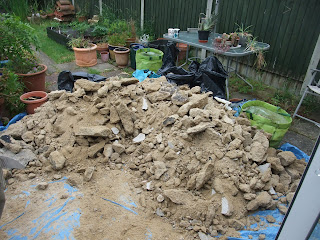 One has to say that having the use of our builders Selco card made life a fair bit easier (for those that don't know (Selco is builders merchants size of your average Q&Q). We picked up our tanking materials, plaster, sealers etc in with the absolute minimum of aggravation; if you’re a regular B&Q user then find yourself a friend who is a member of Selco and feel the difference for yourself; everything you need in one place and in quantity. The only thing Selco couldn’t supply was the sand for the screed, primarily because their delivery charges to our area were too high, because our order was so small at two tonnes. However B&Q couldn't deliver because their time slot system isn't agile enough. I’ve never heard so much bollocks in all my life, I couldn’t buy the sand from Thurrock B&Q because their delivery slots were all gone, but I could buy it from Basildon because they had slots left… the big problem being that the bloke in Basildon B&Q that dealt with deliveries was off for the afternoon… Could Thurrock B&Q order from Basildon B&Qs stock to deliver in Thurrock and take my money? Could they fuck! Absolute unutterable twattery of the worst kind, and all a waste of my time discovering how shite B&Q can be.
In the end we went to BSG who I’ve never used before but were entirely competent in ordering and scheduling, but were let down by a delivery driver's who from the first moment I met him I knew was a total prat. When he arrived he said he wanted to drop the stuff 15 yards from our house outside a neighbours, all for want of asking me to move our motorhome so that he could parallel our front garden to lift it off the lorry, then he moaned that he had to turn the lorry round to parallel the curb if and when I moved the motorhome (all of two minutes). He subsequently dropped the cement in the back of the lorry because he was rushing the lift, and rather than put the pallet forks on the HIAB he just tried to lift the pallet with the grab. The grab lifted the pallet which snapped in half. Needless to say he didn’t get a tip. It’s a shame because the BSG people had same dayed the sand and cement order. And finally If proof was needed that the man was a prat he dropped the wrong bags of sand (builders not sharp) which I did argue looked and felt wrong... but he was insistent that the sand was sharp... He was wrong and cost us the Saturday to lay the screed, but on balance we had a good clean up at home and took things easy, so no harm done in the long run. I must point out that BSG’s yard were most helpful and prompt in exchanging the sand on the Saturday morning after the builder confirmed what I’d expected. And so on Sunday 10th of June we had screed and a floor at the right level. With only one minor cat related paw print issue early in the process.

Of course that's not the end of things, but just having the floor at correct level and having completed the utter back breaking misery of digging out and then shifting the old screed, and being in the full knowledge that at last there is now an end in sight (it is... if not heart warming, at least another milestone, and it allows the brain to cogitate the future a little more clearly). But it’s a source of frustration as well, because while there is an end in sight, we are still stuck with the remains of the project to get the house ready for sale.
Posted by ILTYT_Adventure at 12:56