It Never Rains it Pours.

Pinch Punch First day of the month, so the saying goes. I could have Googled its origins, and maybe later if I pique my own interest then I will... but right now I’m suffering from can’t be arsed. Can’t be arsed to do much of anything today. I’m on a weeks annual leave; throughout which I was intending to decorate the kitchen diner at the rear of the house. I found a couple of mildew spots on the wallpaper above the skirting boards and the room generally looked a bit tired, and because there are two different wallpaper finishes in the area it doesn’t feel like a fully integrated space. With this in mind the plan is to join the two areas with a common finish, lighten up the room and make it look more family friendly with new wall finishes and a new laminate floor (the existing one tends to a red coloured timber effect and is too dark). 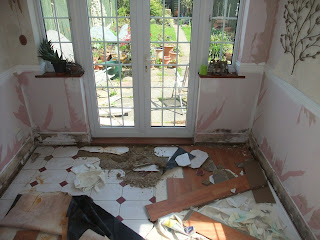 The problem with decorating is that you can’t always be sure of what you will find. I started peeling wallpaper and immediately realised that the mildew that was visible was only a tiny proportion of what was there. I’d assumed condensation at the coldest and most exposed part of the house, what with the extension being open on four sides (if you include the roof.... which you should). Within fifteen minutes I realised that the mildew ran around the entire circumference of the room under the paper, which did seem odd, though given the amount of rain in April I kinda convinced myself that it was nothing to worry about... as you do. As I was stripping off the paper anyway I saw no issues. However I did have a slight sinking feeling that all was not well, when I found an area of mildew that is fully inside the central heated part of the room, and decided that I needed to bite the bullet and dig a little deeper. There is no point doing a bodged job if you’re selling, especially with something like damp, because depending on how rapid it is, your bodge or cosmetic cover up could be exposed by a surveyor with the resultant loss of sale, or compromised in a couple of weeks and then you won’t sell anyway.
I found a spot on the skirting boards that looked easy to fit a chisel behind and gently pried it away from the wall. At this point I had a proper surprise; all the skirtings are MFD (medium Density Fibreboard), and were stuck on the walls with “NO Nails” (which is entirely fine and a very good finish with no drilling). I slid my hand down behind the skirting and found the wall behind the skirting was damp and sticky, so I went to another area and tried there with the same result. 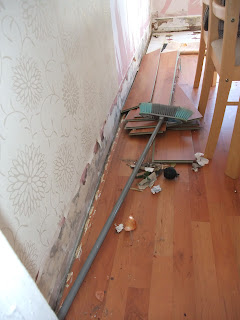 To get the skirting off I had to remove the existing laminate flooring, and as I was ditching it anyway it was effectively re-ordering the program of works. Much to my dismay, under the laminate I found the ceramic tiled finish from the kitchens dinners previous incarnation. Between the tiles and the laminate and been placed sheets of damp proof underlay, waterproof underside/wicking fabric surface. So on balance almost the right materials to protect one surface from the other and from the walls. However the fabric had been laid the full width of the room, thus allowing any condensation on the cold tile surface to travel to the edges of the room via the wicking layer where the fabric makes contact with the plaster of the walls. This allows the damp into the plaster, which allows for the growth of mould blah blah blah.
So you’re thinking, excellent damp source found problem solved. Unfortunately not; I also found a crack in the old tiled surface near the French windows onto the garden, and an oddly raised tile that had always left a tiny dump in the floor near the doors, that we had assumed  was either a nail or tiny off cut of underlay or laminate that had gotten stuck under the floor and the installers just couldn’t see the point in undoing it all and taking it out; assumption truly is the mother of all fuckups. Should you be tempted in future to assume stuff, feel free to have yourself whipped naked through the streets of Aberdeen for your stupidity. The bump I discovered was the size of one of the ceramic floor tiles, it was raised from the rest of the floor by maybe 3mm, it had a crack through the grout side to side. The crack in the grout followed the tiles out to the wall edges (and that sinking feeling was back for round two). The other significant point of order was; what had raised this one tile?. So with no effort whatsoever I lifted the tile from what appeared to be a mound of crystalline cement (cement that damp allows the salts to leach out and form crystals or Secondary Efflorescence I was taught many years ago in Industrial studies... at this point the use of phrases such as "Oh Bollocks", "shit shit shit, fuck shit", "fuck" and "fuckit", become entirely acceptable).
So my initial thought that the laminate floor was suffering from the effects of condensation through a poorly laid vapour barrier between it and the tiles, and subsequent transmission of condensate water through this medium to the plastered walls appears to be only one aspect of why the rear extension appears to have damp around pretty much 360 degrees. It’s looking like it’s got very little to do with the method of water transmission from the source of the fault (though one should actually be happy to have found mould/mildew this early) which now appears to be a cracked floor slab, that may or may not have a damaged DPM (Damproof Membrane) same eight inches below, which in turn is wicking water from foundation level, into the cement of the floor, and then via the laminates membrane to the wall, and this brings us full circle.
I can’t decorate until the damp is sorted. I can’t ascertain whether the damp source is a cracked slab through just bad luck, or whether we have a bigger issue with subsidence, and so I have had to call in the insurers to assess the damage and tell us how to proceed.
Does it affect the plan to go travelling? In the long run no. It’s either an aggravation and expense for us and a delay in putting the place up for sale, or its an aggravation for us and an expense for the insurance company, before the place is put up for sale. I’m trying hard to think of the worst case scenario, and how it would blow us out of the water? But I can’t find anything that is going to stop us, only things that are going to delay us or make us move our schedule around, and as long as all the steps necessary are complete before March 2013, then I think you’ll find that Thunderbirds are still go.
Posted by ILTYT_Adventure at 11:12