Getting Ready: The Tangents.

When eventually we leave the safety of home and home comforts, other than the Aluminium and polystyrene walls of the habitation unit of our motorhome, we intend where possible, legal and fun to try and forage for ourselves, both on the flora and fauna of our land and sea. And now without the flowery language; a bit of fishing, shooting and picking of herbs etc. In part this will help to save some pennies, (though we would hope never to be that poor), and of course it brings you a little closer to the land and sea you’re exploring, and adds extra dimensions to the overall adventure. 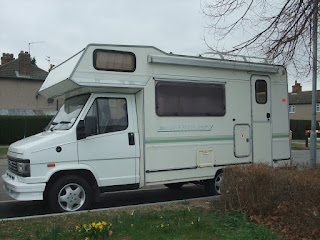 To this end, a week or so back we bought some very basic fishing rods and reels (from these people http://www.tacklebargains.co.uk ) and went out to practice the art of salt water fishing down near where we live on the tidal Thames at Tilbury. Now many years ago I did fish the inland waterways near home, and experienced most of my first forays into camping and sleeping outdoors in that environment. Amanda on the other hand has never fished with rod and line. So guess who blanked and who caught? That’s right on Amanda’s second cast she came up with a small Flounder http://en.wikipedia.org/wiki/Flounder, I was very pleased for her for the reason regaled below.

I remember being invited to go fishing once a week by a fella who lived up the road from us, my mum had said I wanted to go fishing, and as he was an Angler, he volunteered for the task. Then once a week for the next four weeks or so we sat at the same spot and didn’t catch a thing. Frankly I was losing the will to live and the desire to fish. Then one evening (usually a Wednesday as I remember) I caught my first fish; a Roach,  http://en.wikipedia.org/wiki/Common_Roach . And from that moment on I was hooked. However until that moment I was just about sick to the back teeth of sitting by the at the junction of the Hertford Union canal in catching nothing. Eventually the fella (Phil) if I remember correctly moved away, but by that time I had got all my own gear and fished for several years with a group of mates. Once we all left school our group broke up and, I took up hobbies like SCUBA diving, walking and more serious trekking and a bit of air rifle hunting (more about this later).

Since then fishing hasn’t really been on my agenda; but many is the time in the last four years since I moved to Tilbury that I’ve cycled past the guys that fish down by Tilbury Fort, and thought “I fancy some of that”. And so it would appear that in the making of our trip plan, I have fulfilled a side ambition, and introduced Amanda to the joys of tangles, lost fish, tall stories, and slimy cold things that won’t stay still while you try to take hooks from their mouths.

Given the relative success of our first trip, we went out again last Friday morning the 6th of April, on the rising tide and bagged ourselves four Whiting http://en.wikipedia.org/wiki/Merlangius_merlangus before cycling home as the tide started its ebb and the clouds started to fill the sky; up until that point we had been facing into bright sunshine for the best part of three hours, and we both caught fish. All things being equal a very good morning. And then home to start on the serious Easter jobs at home to get the house ready for sale or rent (we still haven’t decided, and it will depend on the market later this year).

The point of this post? Well I think it’s about a coming together of many strands of life, as the plan firms up. As things start slowly to gel together and the idea feels more and more like something concrete as opposed to a pipe dream, you suddenly find that things you have paid no heed to for decades, were stored like savings earning interest in your deep long-term memory. Things like how to tie a hook, that once upon a time drove you mad with frustration, or how to disgorge a hook, and even how to fillet a Whiting; which I learnt from an ex girlfriends dad on the only other occasion in my life that I had fished from the beach. I say beach, I mean the sea wall towards Jaywick East of Frinton in , but even that memory of filleting your own fish and how to do it stuck. At an appropriate time, those memories bubble to the surface imbuing one with confidence. Maybe this post as with others is also about confidence, and finding those reserves you’ve subconsciously stored away for yourself. Anyway enough for now, fishing is back on the agenda. Things are coming together, and for that I am glad.
Posted by ILTYT_Adventure at 07:48